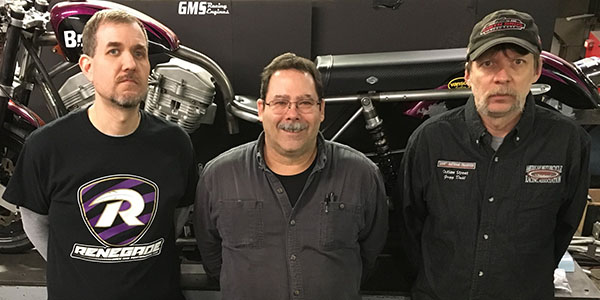 Gregg Dahl and the staff at GMS Racing Engines have announced the addition of former S&S Cycle racing department head David Steve Rominski to the core team at GMS. Rominski brings years of experience and a wealth of V-Twin drag racing knowledge as well as a desire to take part in the racing and developmental programs at GMS. Joined by owner Gregg Dahl and GMS engineer Damon Kuskie, Rominski will help form the nucleus of the growing company.

GMS engineer Damon Kuskie (formerly of the U.S. Naval Research Laboratory) has been at GMS Since 2011 and spearheaded the in-house EFI program bringing GMS into a new era.

Along with the addition of Rominski, GMS is also close to opening a crankshaft and flywheel service department and a new store front speed shop to better service both racing and street clients.