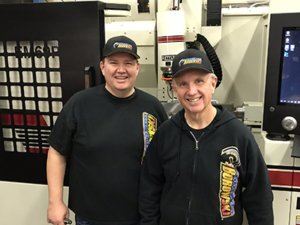 Ken (left) and Joe McCaul bought Borowski Race Engines in 2010 an now build street and race engines with a focus on LS setups. 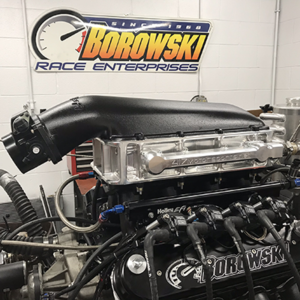 When opportunity knocks, you answer the door. At least if you’re Ken and Joe McCaul you do, and you’re glad that you did. Joe and Ken are a father and son team who purchased Borowski Race Engines in Rockdale, IL, a suburb of Joliet, in 2010. The 50-year-old engine machine shop was founded by Ted Borowski in 1968. Ted ran the business until his sudden passing in 2003, at which point the shop was sold and unfortunately fell into mismanagement.

Around the time of the recession in 2008, Borowski Race Engines was again up for sale. Joe McCaul had a business helping people buy and sell companies and complete mergers and acquisitions and was called in to help sell the engine shop. Ken had recently graduated from the University of South Florida and was brought into his dad’s business to help out on some of the smaller sales. Borowski ended up being a company that Ken represented. 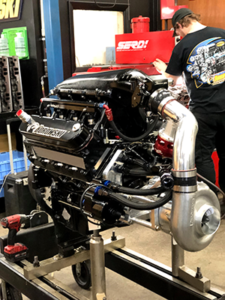 Despite its status at the time, the McCauls were able to get an offer for the shop, but due to the banking crisis, the buyer couldn’t secure a loan. Seeing an opportunity to return Borowski Race Engines to a time when it was truly a Joliet institution, Joe stepped in and purchased the shop. 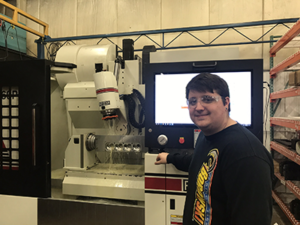 Ken got right to work repairing Borowski’s tarnished reputation, spending the first two years going to shows to apologize to people he’d never met for things he had no idea about. It was all part of the phoenix rising from the ashes as the McCauls chose to keep the Borowski name rather than start fresh. 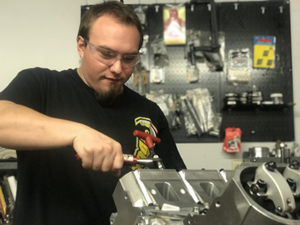 “The fact is, nobody had ever heard of Ken or Joe McCaul in terms of motorsports,” Ken says. “We wanted to revive Ted’s good name and continue a legacy of 50 years in the business.”

Eight years later, Borowski Race Engines has never looked better. The shop was reorganized and significant investments were made to improve machinery, equipment and tools, and slowly but surely business picked up and grew to new heights. However, Ken will tell you it wasn’t an easy job. 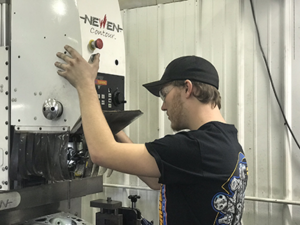 “It’s been a lot of hard work,” Ken says. “I had a cot behind my desk for the first year. It just didn’t pay to pack up to go home to be right back here. Sleeping in the office wasn’t something I ever envisioned. I put in 80 hours a week for the first couple of years to pull this off. I’m proud that it did work out. I need to thank the other people that were involved in making it happen and the friends and family who were there for support.”

Ken and Joe took the 50-year-old shop and invested seven figures worth of new machinery, equipment and tools into it. Today, Borowski employs nine full-time staff and operates out of an 8,000 sq.-ft. facility. Inside, any machining operation that can be computerized is. 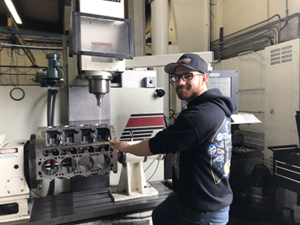 “We wanted to have the most advanced engine machining facility that money can buy,” Joe says. “I think we’re there now. I think the equipment we have is as good or better than any that’s out there on the market. It took us awhile to work our way up to having the set of equipment that we have, but we think it checks all the boxes.”

Borowski has a four-axis Rottler F69A for block work, a computerized, Windows-based balancing machine, a Newan valve job machine with touch screen capability, a Rottler CNC cylinder hone, a Rottler SG9MTS seat and guide machine, a Rottler five-axis EM69P that was just installed in June, a state-of-the-art SuperFlow dyno, and a computerized inventory system with an automated vehicle that drives around the shop and puts jobs away on a racking system. 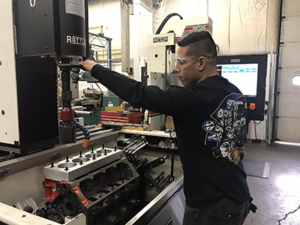 “We’ve been able to invest in equipment and we’ve been able to attract talent,” Ken says. “Had we been maintaining the way things were before, nobody would want to work here. By being able to bring some professionalism and some investment into a business that needed it, and seeing that regional competitors we’re not making these investments and dying by the wayside, it seemed like an opportunity to get the regional talent that we could. We’ve been able to attract really good talent by proving that we put our money where our mouth is.”

One of those key hires was Borowski’s head engine builder John Zapp. He’s now been leading the charge in the engine room for seven years and his son Tim works in the shop as well. The effort behind better machinery, equipment and people has resulted in the shop being 10 times more profitable than it was in 2010. 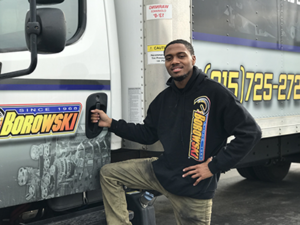 Andrew Shelton by the Freightliner.

“One of the big decisions we made in 2010 and continued to learn through 2013-’14 is, we can’t continue to work on daily driver-type projects,” Ken says. “At that point, we were still taking in work from dealerships and repair shops for pressure testing and resurfacing cylinder heads. But a tough decision had to be made that we needed to stop taking that work in. It takes a lot of fortitude to just decide to stop a big chunk of business and hope the work that you do want will continue to come in and come in more often. Fortunately it did. By moving daily driver people out and focusing on people who want what we’re selling and willing to pay for it and benefit from the equipment that we purchased, we were able to do work just for them, and fortunately it was a good bet to make.”

“We do a lot of Chevy, Ford and Chrysler – small block, big block and LS engines,” Ken says. “The engines that we ship out are three to one LS compared to anything else. We do Ford big block, small block, Modular and Chrysler late-model Hemi engines too.”

When we gave Ken a call, he was standing next to a 4.5L 427 cid Whipple LS that makes 1,260 horsepower and is going in a ’53 Buick for a customer in Florida. It’s this kind of engine work, this kind of investment in our industry and this kind of commitment to doing things better that ultimately sealed the 2018 Race Engine Builder of the Year title for Ken, Joe and everyone at Borowski Race Engines.

The Engine Builders of the Year award is sponsored by Federal-Mogul Motorparts’ Fel-Pro Performance Gaskets and Speed-Pro brands, and is also awarded in both Diesel and Vintage categories as well.

“It carries value for us in our marketing and it carries value all the way through to the people who install our engines in the vehicles that they’re building. Being recognized for this award is really important. We put a lot of time and effort into marketing and this is something that is going to have lasting marketing value. For us, it’s a big deal and I’m really, really pleased that we were selected this year.”