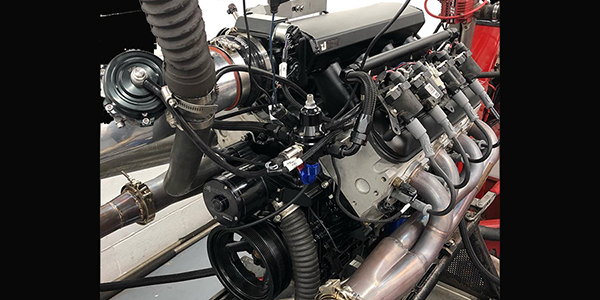 Having been in this industry his whole life, Marty Brown II has been laying the ground work to take over his father’s shop, Marty Brown Race Engines, since a very young age. By the time he was 20 he was running the show and helping his dad build engines like this 363 cid LS Stroker. Find out what went into the 1,200-hp build.

It is said in this industry that fewer and fewer young folks are getting into the engine building profession. While there are shades of truth in that statement, it would be very false to say NO young folks are learning the trade and opening engine shops. We’ve reported on a number of examples, and Marty Brown II is a case in point.

Marty Brown II is the son of Marty Brown, owner of Marty Brown Race Engines in Glen Burnie, MD. The shop opened in 1992, coincidentally the same year Marty Brown II was born. Twenty years later, Marty II was given the opportunity to run the front of the performance engine shop, which specializes in domestic performance engine work with a focus on GM, Chevy, LS and LT. For the past five years, Marty II has been running the shop himself with his dad and two other full-time employees helping with the machine work.

“I’ve always wanted to work with my father,” Brown II says. “It was always fun working on the weekends or working after school with him. I’ve been in the industry for my entire life pretty much.”

Marty Brown Race Engines (MBRE)first began in a one-car garage, and has since expanded from a 1,200 sq.-ft. shop to a 4,000 sq.-ft. shop today. MBRE also updated several pieces of equipment recently, including installing a 3,000-hp dyno.

“We’re working on growing the business,” Brown II says. “We’re looking at getting CNC equipment later this year such as a T&S block master and a Haas VF3. We want to try and do more and more in-house. We’re looking to sell engine combinations and move away from being an old-style automotive machine shop. We’re trying to mainly focus on performance combos.”

As it is now, MBRE does all its machine work in-house with the exception of grinding cranks. With a focus on GM performance work – big block Chevy, small block Chevy, LS and LT engines – the shop has been doing big horsepower, big blocks for a long time now.

“When we first started racing, the only thing we used were big blocks,” he says. “Now, with an LS market that keeps growing and growing, we’re actually putting an LS combo together that’s going to be twin turbo and run on ethanol for our drag car.”

With that passion for the LS and LT market, MBRE recently built a 363 cid LS Stroker to show off during the shop’s open house. The engine will be a street/strip motor and serve as the shop’s dyno mule for testing various components.

“This engine is based off of our basic, entry-level short block that we sell with a few modifications,” Brown II says. “We started with a new, OEM 5.3L block. We went ahead and installed ARP main studs. We line honed it to spec. We also bored and plate honed it. The block is a 3.800˝ bore. We also cleaned up the decks because sometimes the OEM block deck surfaces are atrocious.

“For the cylinder heads we used a stock cast head that we did some port work to. We used a set of double springs and stock valves. We also used a custom ground COMP Cams hydraulic roller camshaft.”

“These parts are great for anybody looking to get some performance and wanting to make a little more horsepower over stock stuff,” he says. “There are so many people out there doing the LS on a stock bottom end. It’s just a matter of time when that’s going to blow. I tell customers you’re either going to spend the money now or later.”

MBRE is running the 363 cid LS Stroker with a little bit higher compression – 11:1 – because it’s going to run on E85. The shop also added a Bullseye 76mm turbocharger off of another customer’s diesel truck they had laying around.

The engine should crank out between 1,000 hp and 1,200 hp, according to Brown II. It’s also the first turbo set up that will be run on the shop’s new dyno system.

“We’ve been doing these kinds of builds for a little while now, so we have it down to a science in terms of what works and what doesn’t work, what bearing clearances we want, what piston-to-wall we want, what ring gaps we want – we know the stuff that works,” he says.

As mentioned earlier, this 363 cid LS Stroker is going to be a street/strip engine, but first the shop plans to use it as a dyno mule for testing.

“We have a YouTube channel that we’re coming out with,” he says. “We’re going to have a series called ‘The Dyno Lab’ to show people what the components actually do. I get phone calls all the time about how much horsepower is this going to gain? What kind of torque numbers am I going to see? Without actually testing it first, I can’t really tell them. This will help with that.”

For now, the 363 LS Stroker impressed at the shop’s recent open house, and with around 1,200 hp on tap, we can understand why!

“We try to give customers the best bang for their buck,” Brown II says. “I don’t want to sell any junk.” 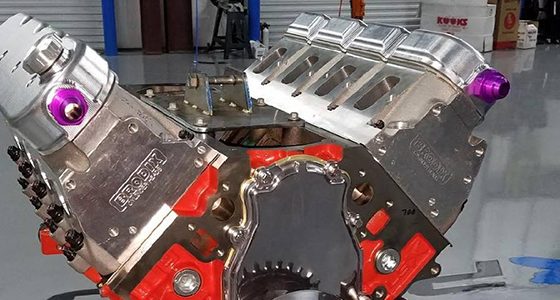