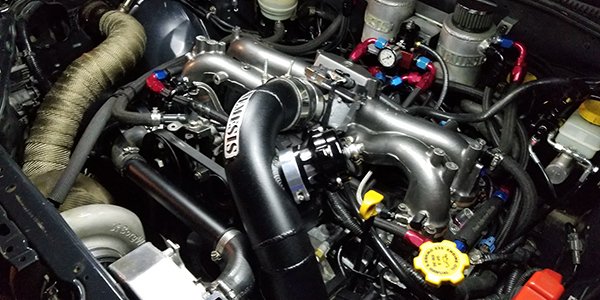 Before opening his engine shop, Nemesis Performance in St. Andrews, Manitoba, Canada, Justin Anning worked for his family business doing helicopter rotor blade repair. Justin was in charge of the tool design, development and manufacturing, which also included CNC machining, which he taught himself how to do.

While helicopter rotor blades were the family business, automotive tinkering was always a family tradition as well.

“Liking cars just came naturally to me,” says Justin Anning. “I started with ECU tuning on a Ford Probe. That platform was limited, so I got into doing Subarus. I even bought myself a Subaru because I was sick of the front-wheel drive. I wanted something all-wheel drive because spinning ain’t winning.”

Once Justin had his new Subaru, he wasted no time modifying it and learning how to tune it. That’s when he realized the stock engine was limited and his love for Subaru engines exploded.

“What I wanted to do was buy a closed-deck block, but one of my buddies convinced me I could learn to do my own closed-deck block,” Anning says. “I was humming and hawing about it, but my buddy kept pushing me. I ended up using our FaroArm to scan the block geometry and got it into the CAD environment where I am familiar, and then designed the inserts and the machining process to the block.”

Justin decided to change a couple things that not a lot of industry guys are doing, such as EDMing the block, which leaves a surface finish that is conducive to bonding.

“That kind of goes back to my rotor blade experience where we used to bond everything,” he says. “All the rotor blades are, for lack of a better term, glued together. What we wanted to do was instead of just freezing the inserts and heating the block up, which we felt was going to leave a bit of stress on the block when normalized. We decided to EDM them and basically install them like cylinder sleeves, which go in with an adhesive to hold them in. They’re a perfect one-to-one fit, but also the added adhesive is what’s different, and we believe that everything is normalized, so there’s not going to be any stress leftover.”

That’s how Anning started getting into engine work. He did one Subaru block for himself and one thing led to another. Justin started building blocks for friends and then tuning took over and then fabricating and then engine building.

“Engine building is what made the decision easy to quit my former job and start Nemesis Performance, because there’s really nobody in Canada doing CNC closed-deck blocks or those types of procedures on the engine blocks,” he says. “Officially, I started Nemesis Performance in May 2017, but we’ve been calling ourselves Nemesis since 2013-2014.”

Nemesis Performance is a specialized Subaru facility, but the shop does other engine builds as well. Nemesis will offer customers of its Subaru builds anything from an OEM replacement to a Stage 1, 3, 4 or Stage X build.

“I always ask my customers, ‘What are your horsepower goals?’” he says. “That plots a roadmap of how we’re going to approach the build. It’s all based on budget and power. Those are kind of the two drivers that dictate what we’re going to build.”

Nemesis has three employees, including Justin and his wife Lauren, and is currently looking to add more mechanics to the team at its 3,200 sq.-ft. facility, where the shop does all its own specialized machining, like CNC work, in-house.

The shop’s latest Subaru engine is one Justin has dubbed a Stage X build. It is a destroked, long rod, CNC closed-deck block with Darton sleeves installed.

“This is probably our biggest and baddest build we’ve ever done,” Anning says. “It’s a 2.35L and we’ve done a lot of the math on what we feel is going to make a smoother motor based on the maximum rod angle or the rod and stroke ratios as well as the average piston speeds relative to a regular 2.5L. It really lends itself well to higher compression, whereas Subarus actually don’t like high compression because of the factory rod and stroke ratio. That’s why they’re always 8.2:1–8.5:1 and some guys play with 9:1, but then they’re really on the doorstep of the knock threshold where the static compression of a true destroked, long rod motor actually likes higher compression. We’re in the vicinity of about 10.7:1, almost 11:1.”

The engine block is Nemesis’ own in-house, CNC closed-deck, version 4 block along with Darton sleeves. The shop also did a half-inch head stud conversion that has actually been time-serted into the block.

The Subaru engine also features Manley Turbo Tuff tri-beam rods, which are a +2mm longer rod, King bearings, and a JDM-spec crankshaft, which is a 2.0L crank.

“That’s where the engine gets its destroked nature from,” Anning says. “The benefit of it is not only the shorter stroke, but it’s got double cross-drilled oiling capacity, so you get double the flow of oil, especially to the No. 3 main, which is actually supplying oil to two bearings. That’s really important for us.”

The engine also has a set of custom CP pistons, which are 10.5:1. The build recipe on the pistons is the Real Street 1500, which is a parts supplier for Nemesis.

“When we were wanting to spec a piston out, I said I would like a CP piston, but something not very common,” he says. “These are actually a domed piston custom built by CP with vertical gas porting as well as lateral gas porting. It’s got the oil support rails in them and they’re coated. These CP pistons pretty much have all the bells and whistles.”

For camshafts, Nemesis chose a mild Brian Crower 272 cam along with titanium retainers and Brian Crower valve springs and stock valves. The cylinder heads got a mild port and polish in-house – nothing too crazy, according to Justin – and the intake manifold is a 2.5I from the Forester, which is a long runner manifold and has been proven to flow just as much as aftermarket manifolds.

“The oiling system is a JDM 12mm oil pump that we service in-house,” he says. “We do our own modifications to them. We’re also currently developing a brace for the bottom of the block. There are unsupported buttresses of the block on the bottom end. There are two or three main webs that are not supported by the rest of the casting, so we’re developing something special for that. The engine is also running our own phenolic spacers and has custom machined spacers for the injector set up.”

To top off this badass 2.35L Subaru Stage X, Nemesis added a Borg Warner S369 SXE twin-scroll turbocharger that provides 50-55 lbs. of boost, and the engine runs on methanol.

“We’ve run methanol for a year and a half now because in Canada it’s harder and really expensive to find E85,” he says. “I don’t do things that people normally do. I always look for something different, and methanol just seemed different. We’ve had great success with it.”

The 2.35L Stage X Closed-Deck Subaru engine is going in the shop’s street/strip development car, which will eventually be used for full-on drag racing.

“Our target for this engine is to make 1,100 wheel horsepower,” he says.