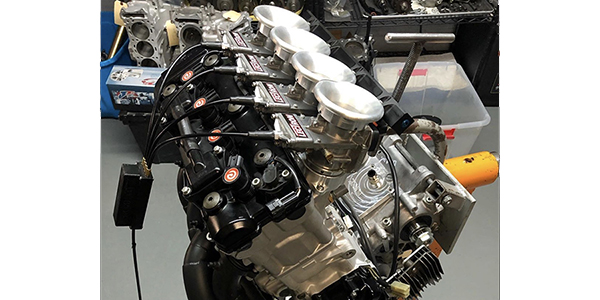 After meeting Angie McBride at the race track and building her motorcycle engines for Outlaw Pro Street back in the day, Landon Ingram’s engine shop, G-Force Race Engines, got put on the map. Today, he specializes in Hayabusa and Suzuki sport bike engines for drag racing applications, just like this nitrous GSX-R1000. Find out what goes into this G-Force custom build!

Landon Ingram was just 20 years old when he got his first motorcycle, a Kawasaki that he would mess around with at the local drag strip. Having fun racing and going fast on that Kawasaki eventually turned into Landon messing with the engine to make improvements. Thus, another engine builder was born.

“I got that bike running pretty good,” Ingram says. “Then, I ended up meeting a girl at the track, which happened to be Angie McBride. She’s now Angie Smith and races NHRA Pro Stock. Her and I ran a class called Outlaw Pro Street for five years and won a championship. Then, we went on to race in NHRA, but we were pretty young and the funding just wasn’t there. To race in NHRA is almost a $1-million-a-year deal now. That was probably around 2007.”

Racing with Angie Smith and doing her engine work put Landon on the map. With an uptick in engine building inquiries, he started G-Force Race Engines in Lewisville, NC in 2007.

“From there on out, after I started doing Angie’s stuff, everybody wanted to know when she was running,” Ingram says. “That shot my business up. I’ve now been building motorcycle motors at G-Force Race Engines for 12 years. Before that, it was just here and there that I would do stuff for people.”

Today, Landon is 41 and primarily builds Hayabusa and Suzuki sport bike engines for drag racing applications. The occasional street bike build or dirt bike and ATV cylinder head job will make its way through G-Force as well. Landon runs the shop along with his brother Wade and another employee, Jermaine. When it comes to machine work, G-force does just about everything in-house.

“Most everything is done in-house with the exception of the cylinders on these new sport bikes, because they all have the Nikasil plating (Nickel Silicon Carbide),” he says. “There’s only three people in the world who actually do that plating, so I do have to send those out. But I do the cylinder head work and I do custom pistons here in-house. I order the blanks from either JE or CP and do my work on them using the machines here. Most everything is done here.”

One of the well-known motorcycle engines Landon and G-Force has worked on over the years is the GSX-R1000 nitrous engine in the Suzuki sport bike known as Dead Man Walking.

“The bike runs the XDA Series in the Nitrous Bulls class,” Ingram says. “When I talk about this class, most people ask me why they don’t show times. Well, that particular class was made for grudge racers – there are no times, but the racers get a win light. This class is becoming more popular with the No Prep stuff.”

“The reason it’s called that is because one of my friends, Jeff Strickler, owned the motorcycle,” he says. “Jeff ended up passing away from cancer last year in his early 60s, but I had one of my other customers buy the motorcycle so we could keep on racing it. That’s what Jeff wanted to do, so we still race it every weekend.”

Richard Gadson races the motorcycle, while Landon builds the engines for it. The bike’s new owner is John Childrey, who lives in Nashville, TN.

Looking at the build of this 1,143cc, nitrous-fed, GSX-R1000 engine, G-Force started with Ingram’s own Stage 3 cylinder heads. It’s got a set of 76mm JE pistons, which Ingram customized from blank pistons. The crankshaft is a Marine 63mm billet crankshaft. The connecting rods are Carrillo H-beam rods. The rod and main bearings are from King. The valvetrain features Web camshafts with Vance & Hines valves. The transmission is an R&D Motorsports 6-speed, and the bike has an MTC Engineering clutch and uses Energycoil coils.

“The most important work in this engine was the piston-to-cylinder-wall clearances, the ring end gap, the cam timing, the combustion chamber and intake port profile – all that stuff comes into play,” Ingram says. “I do all the engine work and assembly myself to keep the quality control in check.”

To finish off this sport bike engine build, G-Force uses Brad Penn oil, which is now under the PennGrade name.

When this engine is running at its peak, the GSX-R1000 puts out a thrilling, 415 rear-wheel horsepower and can make low, 4-second passes at 170+ mph in the 1/8th-mile. With runs like that, we’d say this is one ‘Dead Man Walking’ at a very brisk pace!

Advertisement
In this article:Elring, Engine of the Week, PennGrade Motor Oil, Suzuki