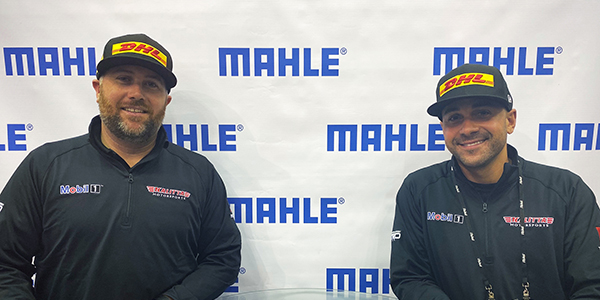 Team MAHLE marks the next level of partnership between MAHLE Aftermarket and the wide network of elite motorsports competitors that support MAHLE. Along with the creation of Team MAHLE, an extended partnership through 2020 was announced with all three Kalitta Motorsports teams.

MAHLE Aftermarket announced the formation of Team MAHLE, which marks the next level of partnership between MAHLE Aftermarket and the wide network of elite motorsports competitors that support MAHLE. Along with the creation of Team MAHLE, an extended partnership through 2020 was announced with all three Kalitta Motorsports teams – the Mac Tools and the DHL/Kalitta Air Top Fuel dragsters and the DHL Toyota Camry Funny Car.

Kalitta Motorsports, now celebrating 60 years of motorsports history under the leadership of owner Connie Kalitta, represents a commitment to racing excellence and the ideal team with which to launch Team MAHLE. This year Kalitta Motorsports celebrated Doug Kalitta’s successful season bracketed by wins at the season opening Winternationals and season finale, the Auto Club Finals as well as a historic first win at the U.S. Nationals on the way to a runner-up NHRA Top Fuel championship finish. Todd and Langdon also collected three Funny Car wins during the season.

Kalitta Motorsports teams have trusted MAHLE to drive home wins in NHRA Funny Car and Top Fuel for years. With the formation of Team MAHLE, that partnership will expand to drive technical development in race engine technology, ultimately leading to improving on the already industry leading strength of MAHLE Performance components.

Jon Douglas, president of MAHLE Aftermarket Inc. stated, “MAHLE is very proud of its decades’ long history of partnering with the very best in motorsports from Formula 1 to NASCAR and NHRA, including other venues like Off Road and Drift.  Launching Team MAHLE is a momentous occasion for us, as it provides a home to all of our elite motorsports partners, and being able to kick it off with a Championship Team like Kalitta Motorsports is only the beginning. Kalitta Motorsports is consistently a champion or top contender in NHRA and their team drivers push the envelope and fight aggressively to win week after week and year after year.”

Team MAHLE racers work closely with MAHLE Aftermarket throughout the year to test products on the track, off-road and dyno providing valuable R&D for new product development and test information and many often serve as brand ambassadors.