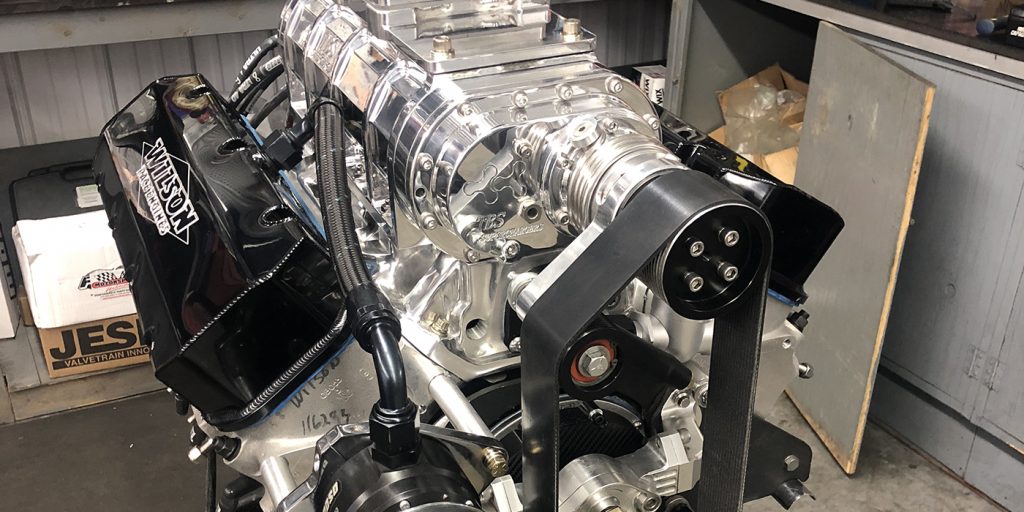 Chris Wilson knew he wanted to be in this industry from a young age. Both his father and uncle raced cars, and his uncle was engine builder himself. Chris learned a lot from the two of them, but also messed around on his own to learn how to repair and rebuild engines.

“I grew up with my father on a farm and I was working for him from 5:00 a.m. until lunch time, and then I had some free time,” Wilson says. “I knew a guy who owned an engine shop who was getting older and needed help. I went there and worked for him for a while, which got me serious with it. When I got tired of working there, I had some friends who wanted me to do some motors for them on the side and then their friends wanted me to build motors and it went from there.”

The friends Chris raced with and who he built engines for had very good success running Chris’ engines. That validation cemented Chris’ future in this industry.

“I started engine building full-time about nine years ago,” he says. “I opened Wilson Race Engines on my own six years ago. The shop is about 2,800 sq.-ft. including the dyno room. We build drag race engines, dirt car engines, street car stuff and some boat engines. We’re not your mail-order-type motors. Our stuff is a little bit ahead of that.”

The Lincoln University, PA-based engine shop can do most of its work in-house, but does send out cylinder head work to other machine shops. Wilson Race Engines, LLC also has a quality dyno room with a SuperFlow dyno that can run high-horsepower engines.

“I ended up taking the dyno from Jenkins Competition when [legend Bill ‘Grumpy’ Jenkins] died and brought it here,” Wilson says. “We do everything – Comp Eliminator motors, blown motors – we’ve done a lot of high-end customer stuff. We can do motors from 200 horse to 3,000 horse. Very few people can put motors on the dyno that run above 9,000 rpm. Our dyno can run to almost 14,000 rpm.”

Wilson Race Engines has four employees – Chris, one full-time employee, one part-time employee, and Chris’ father, who is retired and helps out when and where he can.

“We do a lot of the engines for big name bracket racers,” he says. “These are very high end, bracket race motors. We’ve done stuff for a lot of guys who have won – a lot of champions and big winners. We specialize in the big block SR 20 motors. We have a good knack for them and ours are extremely fast and reliable.”

One of the engines the shop just finished up a rebuild on is a 598 cid big block Chevy SR 20 for a repeat customer. The engine got updated with a new head program and new manifold program.

“He’s a good customer of mine who I’ve probably built four motors for over the years, and this one here, he wanted to keep the SR 20 style that he had and wanted it updated,” Wilson says. “We went through it and did a different/new CNC port program and used a new CNC’d manifold. We did different stuff to try to get a little faster.

“The port program offered by Brodix is a very good port program, but there are newer and greater things out there. It’s just like the first model of a car that comes out. For that year, they’re nice, they’re really good, but in the next couple years they change the things that are wrong with them. That’s basically what’s going on with the SR 20. There’s newer versions and every time you go into a new version, sometimes they work, sometimes they don’t. You have to know the engine and what it likes. We were probably one of the first five people to get that cylinder head, so we’ve done some research.”

This engine features a 598 cid short-deck, Brodix aluminum block. It has Brodix SR 20 heads with a revised CNC program and a new Brodix manifold that the shop hand ported, which Wilson Race Engines was one of the first in the country to have.

“The engine also has a Callies Magnum crank, Callies Ultra I-beam rods, an LSM camshaft, Victory valves, PSI springs, Isky EZ-Max lifters, a Weiand-style oil pan, a Moroso pump, a Jesel belt drive, 1/2˝ Trend pushrods, Trend wrist pins, Wiseco pistons, and T&D rockers,” Wilson says. “From there it was just putting it back together and making sure everything fit.”

This particular build is an example of Wilson Race Engines’ run-of-the-mill big block SR 20. What makes it special is the use of a short-deck block with a 4.500˝ crank and short 6.385˝ rods.

“What that does is, yes, it’s harder on pistons, but in a 598 cid tall deck, the piston speed is very slow,” Wilson says. “A better cylinder head and faster piston speed is what you get with the short deck. The motor accelerates extremely fast.

“When you start running the motor higher to make more power, you’ve got to stiffen things up, so we put bigger pushrod diameter in. It is a different valve spring. The ramp speed of the camshaft is a little bit faster and more aggressive, so that’s why we use the Isky EZ-Max lifter and stuff like that.”

This 598 cid BBC SR 20 is a naturally aspirated build, but it is capable of using nitrous if the customer wants.

“For the bracket racers, you never know what these guys are going to do,” he says. “We give them a happy medium so if they want to upgrade something they can.”

With the rebuild done, this engine makes around 1,150 horsepower naturally aspirated. It the customer were to add nitrous, Wilson estimates the engine could be in the 1,500-horsepower range.