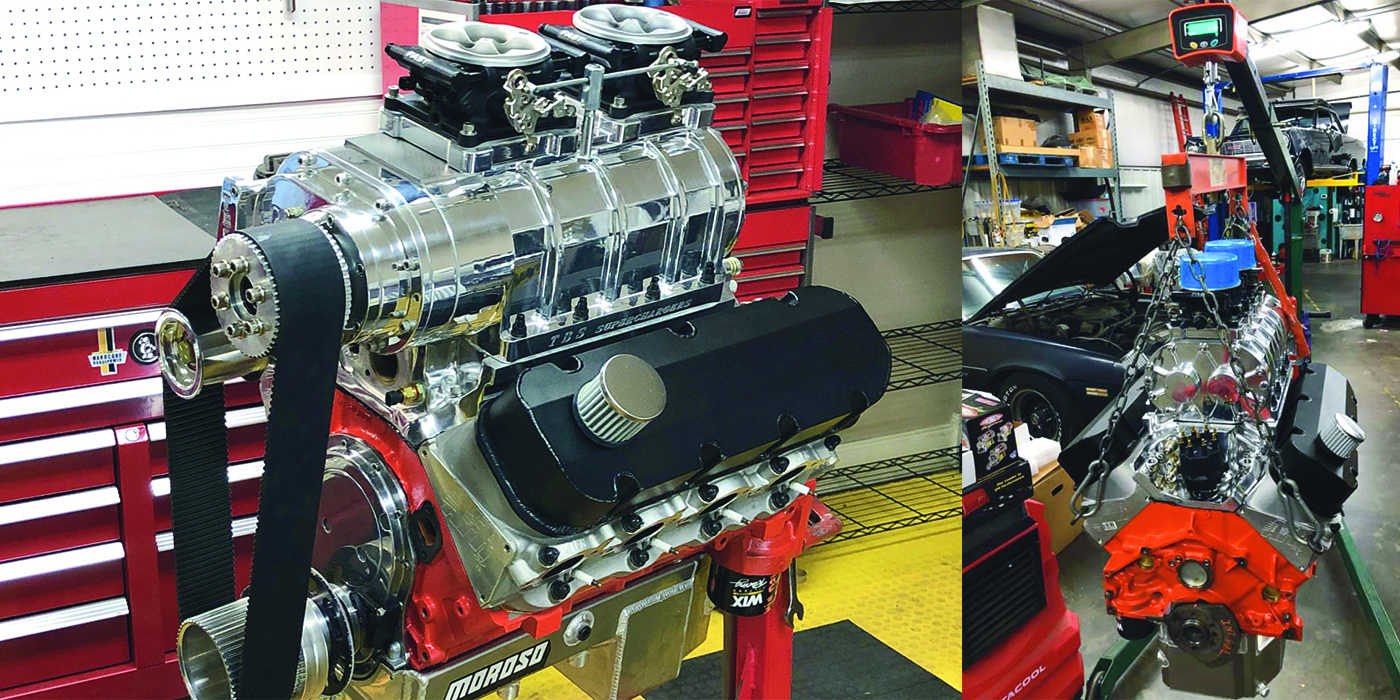 Looking for the ultimate in reliability and durability on 93 octane, Hardcore Horsepower built this 612 cid big block Chevy engine with a 10-71 blower and Fast EFI to the tune of 1,000 horsepower. Find out what else went into this build.

The day Mike Petralia turned 16, he got a ‘65 Mustang Fastback with a manual transmission. He and a buddy immediately took it for a joy ride to the nearest In-N-Out Burger. At the time, Petralia didn’t even know how to drive stick, but he quickly mastered it and a whole lot more when it came to cars and engine work. In fact, Mike’s family has deep roots in this industry.

Mike’s mother’s third cousin was Phil Weiand, the founder of The Weiand Company, a manufacturer of blowers, intakes and other performance parts – now part of Holley. With the auto industry running through the family tree, Mike naturally grew up going to car shows and races before he really knew what cars were.

“My family has always been part of this industry,” Petralia says. “Phil passed away in the late-‘70s and his wife Joan took Weiand over. By that time, I was about 14 or 15 years old and after summer school my mom would take me down to Weiand and I would work in the parts kit room counting nuts and bolts and taking inventory.”

Being introduced to car parts and racing at an early age led Mike, and his buddies, to have an interest in tinkering on cars and engines – the usual high school escapades for the era.

“Through Weiand I would always get passes to go to the races,” he says. “As soon as I could drive, I was taking my friends and girlfriends out to the drag races at Pomona. My friends and I were always working on stuff, even though we didn’t really know anything. We’d dive in and read the car magazines like Hot Rod and Car Craft.”

After graduating high school, Mike got a job at a speed shop called Western Performance, but it wasn’t long before his family was calling for him to fill a role at Weiand in its sales/tech department.

“I went to work for Weiand and stayed there for nine years,” he says. “By that time, Holley had bought Weiand and made the decision to move Weiand to Bowling Green, KY. I had just gotten married and we bought our first house, so we didn’t want to move to Kentucky. I turned down that offer.

“I was essentially the magazine liaison at Weiand when they needed to talk to somebody about tech questions or needed to shoot pictures with cars, etc., so I had a lot of magazine contacts. Lo and behold, by the late-‘90s, I was working for Jeff Smith on Chevy High Performance magazine.”

Mike did the magazine thing on and off over the years, working on publications such as Chevy High Performance, Super Chevy magazine, Engine Masters magazine, as well as freelance writing. However, both Mike and his wife were beginning to get sick of living in California. A phone call from Horsepower TV would change that.

“I got a phone call to go work out here in Tennessee for Horsepower TV,” Petralia says. “They were building a new studio and needed somebody to design and build their engine dyno system. Since my wife and I wanted to move, it kind of fit the bill. We moved to Tennessee in 2006. Unfortunately, the Horsepower TV gig was not anywhere near what I expected it to be. It just wasn’t the job I wanted to have. I only worked there about 10 months.”

What was Mike to do? It didn’t take him long to figure it out. He decided to open an engine shop called Hardcore Horsepower & Dyno. He bought a shop property and opened the business in the summer of 2007.

“I stick with old school Gen I small blocks and Mark IV big blocks,” Petralia says. “I’ll do a very limited amount of LS engines, but if it doesn’t have an American V8 under the hood, I generally don’t touch it.”

While the shop has the ability to do some minor machining and fabrication work, the vast majority of the shop’s engine machine work gets sent out to machine shops Mike relies on in the Nashville, TN area.

Recently, Hardcore Horsepower finished up a street build on a 612 cid big block Chevy engine with a 10-71 blower and Fast EFI.

“It’s a 100-percent street build, made to run 100 percent on pump gas,” he says. “The goal was 1,000 horsepower at the crank on 93 octane, but with absolutely no tuning required, no worries, no nothing. You just get in the car and drive it anywhere or any time.

“I built it with really strong parts, but it’s a conservative build. With 612 cubic inches, some critics will say, ‘Only 1,000 horsepower blown?! That sucks.’ But they don’t understand. It runs on 93 octane and we limited it to 7-lbs. of boost. It’s all about get in, turn the key and go with 1,000 horsepower for real.”

The big block Chevy build is for a customer with a Tri-Five Chevy who wanted something very reliable and very stout. Hardcore Horsepower knew just how to achieve it. The build started with a World Products’ Merlin IV block punched out to a 4.530˝ bore and a 4.750˝ stroke. The pistons were custom made by JE and the motor has an 8.75:1 compression.

“I chose the Fast EFI system because it is outrageously reliable,” Petralia says. “Sitting on top of a blower it makes for easy starting and easy running, but it is limited to 1,000 horse. I could have changed injectors and put bigger injectors in, but doing that would have cost as much as the whole EFI system. It just wasn’t worth it.”

One of the slight challenges for this build was the customer’s request to set the engine up with a motor plate, alternator, mechanical water pump – everything – before sending it out the door.

“When I sent it out, I couldn’t fit everything on the motor in the crate, so I had to put those parts all around it,” he says. “The motor plate was too wide in either direction. I had to box it all up and put it inside the crate with the engine.”

Lastly, Petralia shipped the 612 cid big block with two different spark plugs depending on what the customer wants to do with the engine.

“For my street motors, I use NGK or Autolite spark plugs,” he says. “In this blower motor, I shipped it with the NGK 6 plugs I tuned it with on the dyno to 1,000 horsepower. However, if the customer ever did want to turn the boost up from 7-lbs., he could use the set of Autolite AR 3932 plugs, which are a really cold plug.”

Now the 1,000-horsepower big block is ready to install in the customer’s Tri-Five for a life of street use. On to the next build!