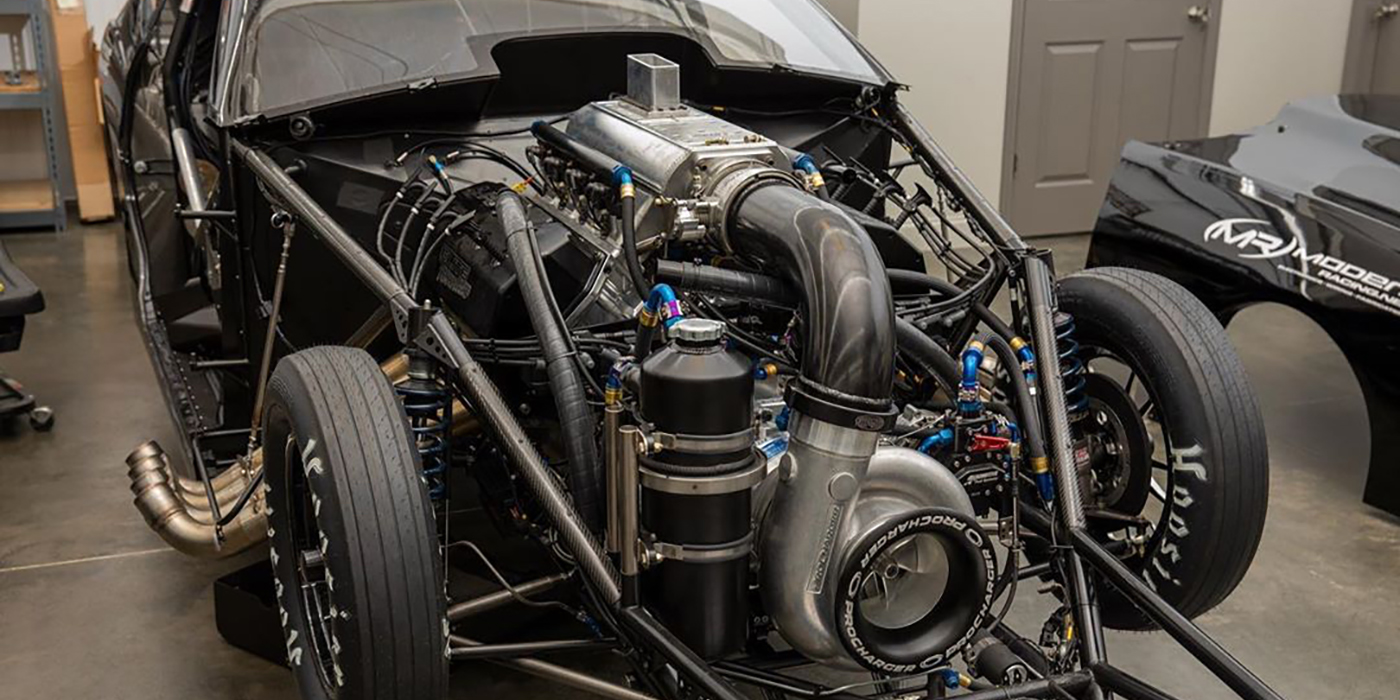 After a recent crash at the NHRA U.S. Nationals in Indianapolis, Steve Matusek of Aeromotive was fortunate enough to bounce right back. However, his team first had to swap their Pro Mod Mustang and its twin-turbo engine for a black, 2018 Camaro with a ProCharged 521 cid Hemi. Find out what went into the new set up.

No one gets into auto racing to crash. In fact, professional drivers are trained to do everything they can to avoid a crash or lose control of their race car. But, as we all know, crashing is many times unavoidable and certainly comes with the territory of high speeds and high horsepower.

Aeromotive Inc.’s founder and president, Steve Matusek,  recently debuted his 2020 Pro Mod Mustang with his new title sponsor, Tequila Comisario, at the NHRA U.S. Nationals in Indianapolis back in September, and unfortunately ended up on his roof.

“These cars are volatile and at times on the edge, and sometimes you get away with things and sometimes you don’t,” Matusek says of his crash. “The problem we had with this particular run was that the car rattled the tires. When we left the starting line, we underestimated the track a little bit because the wheel speed was a little lower than it should have been down low. The net effect is when the car starts to accelerate and you don’t have the velocity and the wheel speed, it’ll start to tremble the tires and shake. That’s what it did and it pushed the car toward the center line.

“At that point I was fighting it. When you drive these cars, you start with your left hand at a nine o’clock position and you’ll lock your arm because typically if the car leaves the starting line and picks the front end up, it’ll carry it a ways. By the time it sets the front end down, you could be exceeding 100 mph, so if you’ve got the wheel cranked left or right, it’s going to dart the car in the orientation that you have the wheel pointed.

“In this particular run, the car pulled me hard right. It didn’t necessarily pick the front end up because the wheel speed was lower than it should have been, and the right tire got out of the groove, so it was trying to push me over the center line. I was fighting it, so my hand that’s usually in the nine o’clock position was all the way down in the six o’clock position because I was trying to bring the car back left into the groove.

“When the power came in and the gear change came into play, the wheel speed changed dramatically. I was again trying to pull the car back into the groove and it lost the tire and took me right over the center line. I had no control. The front end got light because all the power came in and it just basically snowplowed me over the center line. By the time I caught it and tried to counter it, it was too late and the car was already starting to flip over.”

Matusek, who races NHRA Pro Mod with Elite Motorsports and Modern Racing, was on his roof in just a few seconds after the green light. His first instinct was to protect himself.

“When you end up on your roof, I thought about getting in a cocoon position – crossing my arms to keep them from flailing around – because the last thing you want is your arm to flail around and catch the asphalt and grind a hand off or a finger off,” Matusek says. “I also brought my legs in because if I had an impact, I didn’t want to cause my legs to get broken.

“Fortunately, I didn’t have a hard impact. It did roll over. We have to put a new body on the car, but structurally the car was not hurt that bad. We have to replace a windshield bar and we have to replace a strut bar, but those aren’t really structural by nature. It’s just a matter of putting another body on the car and replacing a couple of bars and we should be good to go.”

Parts of Matusek’s 521 cid twin-turbo Hemi engine were also damaged in the crash to the point where using the engine again this year wouldn’t be possible.

“We were making some huge strides. We figured out some power management that was really helping us accelerate the car down low. We were pretty happy with the car we had and our performance levels. Unfortunately, that car is not going to see the track again this year because of the amount of time it takes to get a body and do the repairs necessary.”

Matusek’s crash in the first round of the U.S Nationals may have been avoidable, but he was in it to compete and win a race. Had the circumstances been different, Steve says he may have lifted off the gas and saved the car from flipping.

“We understood that I was racing the first round,” he says. “I knew I had the car on edge – I was pushing it. If it would have been a qualifier, I would have more than likely lifted, but again, you’re racing and I’ve been doing this a long time and you get away with those maneuvers sometimes, but sometimes you don’t, and when you don’t it’s ugly. When you do, nobody really notices it and you just think, well that’s Pro Mod. Sometimes you push it and it bites you and that’s what happened in this instance.”

In a year of racing where the Coronavirus has severely impacted the race schedule, Matusek might have thought about pressing the pause button on the rest of his season, however, the fortunate part about Steve’s involvement with Elite Motorsports and Richard Freeman was that they have a corral of cars. One of the cars they had was a Camaro with a 521 cid ProCharged Hemi engine in it.

“This is a car that was campaigned by my partner back in the day, Danny Rowe,” Matusek says. “He built this car in 2018 and he had a roots-style blower on it, and we both ran roots blown Camaros. His was a 2018 and I drove a 1968 Camaro. Well, Danny suspended his racing operation at the end of 2018 and sold his racing operation to Richard Freeman. Richard bought that and converted his roots-blown car over to a ProCharged car at Modern Racing in North Carolina. I actually drove this car in February and early March in Orlando, FL, but we parked that car and we were campaigning my turbocharged car.

“That ProCharged car has been sitting there and we feel like the rule package is really more conducive to a centrifugal blown combination. We even considered bringing this car out to Indy because we felt like the rules really favored that combination in their current state. But again, we elected to stick with my car. The crash forced our hand to get the moth balls off of that car and bring it out and take it to Gainesville.”

Changing to a new car and engine is not always easy, but Matusek was familiar with this car and the Procharged Hemi engine was very similar to his twin-turbo Hemi set up.

“The rotating assembly on these two different platforms is very similar,” he says. “They’re both Allen Johnson 521 cid Hemis. They have the same bore and stroke, but the camshaft profile is different. The valve sizing per NHRA rules is different. The valves for the centrifugally blown combination is a 2.400˝ valve on the intake versus a 2.450˝ for the turbocharged combination. Obviously, you’ve got a different manifold, different camshaft, the same rotating assembly, the same compression. The engines are very, very similar, and both of those engines are built by Elite Motorsports in Wynnewood, OK. That’s part of our deal with Elite – we get the engines and transmissions from them.

“The block and heads are from Allen Johnson Performance Engineering. We’re running GRP rods in this particular engine and we use a Hogan intake manifold. We also have a 21-gallon-per-minute Aeromotive gear pump on the ProCharger combination that’s a direct-drive mechanical pump, along with our fuel pressure regulator that’s matched to go with that pump with a base pressure of about 90 psi. You stack boost on top of that regulator at a 1:1 ratio.

“With the turbocharged application, we have a 33-lb. boost limit, so you take the 90 psi plus 33 and you have 123-lbs. of fuel pressure when it’s full boost. On the ProCharger combination, it will be a little bit more because those things make more than 33-lbs. We’re probably more in the 50-lb. boost range, so that fuel pressure will be in the 140-psi range.”

As for the horsepower level of the new ProCharged Hemi combination, Steve says the exact number is a trade secret.

“We do have a hub dyno that Aeromotive purchased and we lease it out to Modern Racing and Justin Elkes, who is my crew chief,” he says. “We’ve done extensive testing with the turbo combination and we found some power on that hub dyno. Both engine combinations – the twin turbo and ProCharger – are well north of 3,000 horsepower.”

Having walked away from this most recent crash, Matusek says he is looking forward to finishing out the season.

“The safety in these cars is unparalleled and I can’t say enough about NHRA and their protocols and the Safety Safari,” he says. “I literally walked away from that mishap and I had no soreness, no problems, no issues at all related to the crash. I’ve got no reservations about getting back in the car. I understand what happened and why. It’s our job to understand that and not do it again and hopefully be smarter the next time those sequence of events happen, because they will happen. It’s just a matter of how you address them when they happen.

“Virtually every national event NHRA competition that Pro Mod has contested so far has been at Indianapolis. They’re starting to branch out a little bit as some of the different states have opened up. We’ve competed in three events year-to-date (early September). For the rest of the year, we’ve got Gainesville, St. Louis, Dallas, and then we finish up our season in Las Vegas.

“Typically, we run a 12-race season. This year, that’s going to take us to seven races for the year. Since we brought on a brand new sponsor (Tequila Comisario) and we had a lot of momentum with a great team behind me with Elite and Modern Racing, as well as my company, we decided we’ll finish up the year with this different combination and get a lot of experience with that combination.

“Going into next year, we’ll be that much stronger and understand these two different combinations and be able to pick the one that we feel is going to be the most competitive for 2021.”