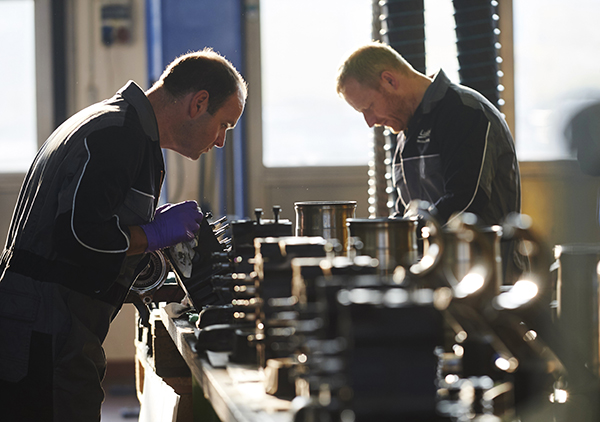 One way to enhance fuel economy has been clear for some time: lower-viscosity lubricants, which can deliver enhanced fuel efficiency in the right application. It’s why the American Petroleum Institute introduced its FA-4 category.

A: Heavy-duty vehicle and engine OEMs are intimately familiar with the increasingly strict emissions standards that have spurred cleaner, more efficient diesel power on today’s highways. The results have benefited not just the environment, but also fleet owners’ bottom lines—and those fleet owners are becoming increasingly receptive to ways that can further drive down their fuel costs.

One way to enhance fuel economy has been clear for some time: lower-viscosity lubricants, which can deliver enhanced fuel efficiency in the right application. It’s why the American Petroleum Institute introduced its FA-4 category (in addition to CK-4) in 2016. The split in the category covered low-viscosity lubricants designed for new-model engines that could deliver fuel economy gains up to 2%.

Five years later, however, FA-4 lubricants have only achieved 1% market share, according to data from Kline & Company. Why is that the case? And what kind of industrywide benefits could be achieved with wider OEM specification and adoption? Lubrizol Technology Manager John Loop has the answers in this Q&A:

Q: What are some of the major reasons FA-4 lubricants haven’t caught on?

A: One of the biggest reasons has been hesitance at the end-user level, but I think that is slowly changing. Traditional wisdom among fleet owners and maintenance technicians has held that thicker lubricants protect an engine better than thinner lubricants—but with today’s formulations and advanced additive chemistry, lower viscosities can provide the same robust protection as any available formulation. Plus, all certified FA-4 lubricants meet the same wear, oxidation, aeration, and other performance characteristics as their higher-viscosity CK-4 counterparts.

The other reason has been that several OEMs have been reluctant to specify FA-4 for use in their engines. And until that changes, there is a pretty hard limit on adoption—end users won’t use a lubricant that isn’t approved by OEMs, lest they void their warranties.

Q: What’s the source of OEM hesitancy around FA-4?

A: First and foremost, OEMs, like end users, want assurance that the lubricant will provide long-term engine protection. And while the laboratory test data and API certification are one thing, real-world performance is something OEMs want to see.

That performance exists. Lubrizol has field-tested FA-4 lubricants in real-world engines from a variety of OEMS, generating over 86 million miles of testing. Trucks we’ve tested include new models designed to be filled with FA-4 lubricants, and older-model trucks where FA-4 is not specified by the manufacturer. Through this testing, what we’ve found is clear: Engines, old and new, are demonstrating expected levels of wear at up to 500,000 miles of service while demonstrating significant fuel economy improvement.

The fact is that viscosity is not a key indicator of protection. Proper formulation with the right additive technology is.

Q: What benefits can OEMs realize by specifying FA-4 for their engines?

A: There are a few things. Emissions regulations aren’t going away, and there will be continuous pressure on OEMs to create increasingly fuel-efficient engines. For example, phase two of the EPA’s Greenhouse Gas Emissions and Fuel Efficiency Standards becomes effective in model year 2021, phasing in through 2027. Each phase will require larger gains in fuel economy and greater emissions reductions.

Meeting these requirements will require everything at an OEM’s disposal. Lower-viscosity lubricants can be an effective tool, given that a thinner lubricant that flows across engine parts with less resistance can directly translate to better efficiency.

Certain OEMs have already taken advantage, and I believe their experience with lower viscosities today may better position them as the drive toward higher levels of efficiency continues.

Q: Are there other competitive advantages for OEMs as well?

A: Certainly. For one, I think the trucking industry is looking more closely at how their maintenance practices can positively benefit their profit margins. Telematics, for example, have offered fleet owners and operators much deeper insight into their operations—and they’re looking for ways to become more efficient.

So as older trucks inevitably are phased out of service due to fleet buying cycles, and necessitate replacement, I think it’s reasonable to expect fleet owners will seek models that grant that efficiency. Models that can be filled with FA-4 lubricants do exactly that. Consider that fuel represents about 24% of the average North American fleet’s per-mile costs, according to the American Transportation Research Institute. If FA-4 can give a fleet 2% better fuel economy versus trucks that only accept CK-4, that’s a powerful way to enhance profitability.

Q: For OEMs who do not specify FA-4, but might be considering it, what advice would you offer?

A: It’s worth considering that thinner lubricants can enable some design changes in how OEMs optimize their engines for efficiency, and that they are highly complementary to the current trends we’re seeing in engine design. Modern engine hardware works very hard to deliver the efficiencies necessary today. A thinner lubricant inherently reduces a bit of engine stress by allowing it to move with less resistance. Over the course of an engine’s life, that kind of stress can add up, and it means that lower viscosities can contribute to a longer useful life for an engine, all while delivering those fuel economy benefits.

But most importantly, it’s that FA-4 lubricants—and the lower-viscosity technologies that we’ll surely see in the future—can deliver all the necessary protective capabilities OEMs have come to expect from the lubricant market. The millions of miles of testing we’ve performed at Lubrizol demonstrate that performance. The choice between CK-4 and FA-4 is fundamentally a matter of whether you want to enable a higher level of fuel economy performance. There is no compromise.

John Loop is a Technology Development Manager within The Lubrizol Corporation’s additives for transportation division. Since joining Lubrizol in 2001, John has developed unique and exclusive Heavy-Duty Diesel Engine Oil formulations for some of the biggest global HDD Engine Oil marketers for the past five API Categories (API CI-4, API CI-4 Plus, API CJ-4, API CK-4 and API FA-4).