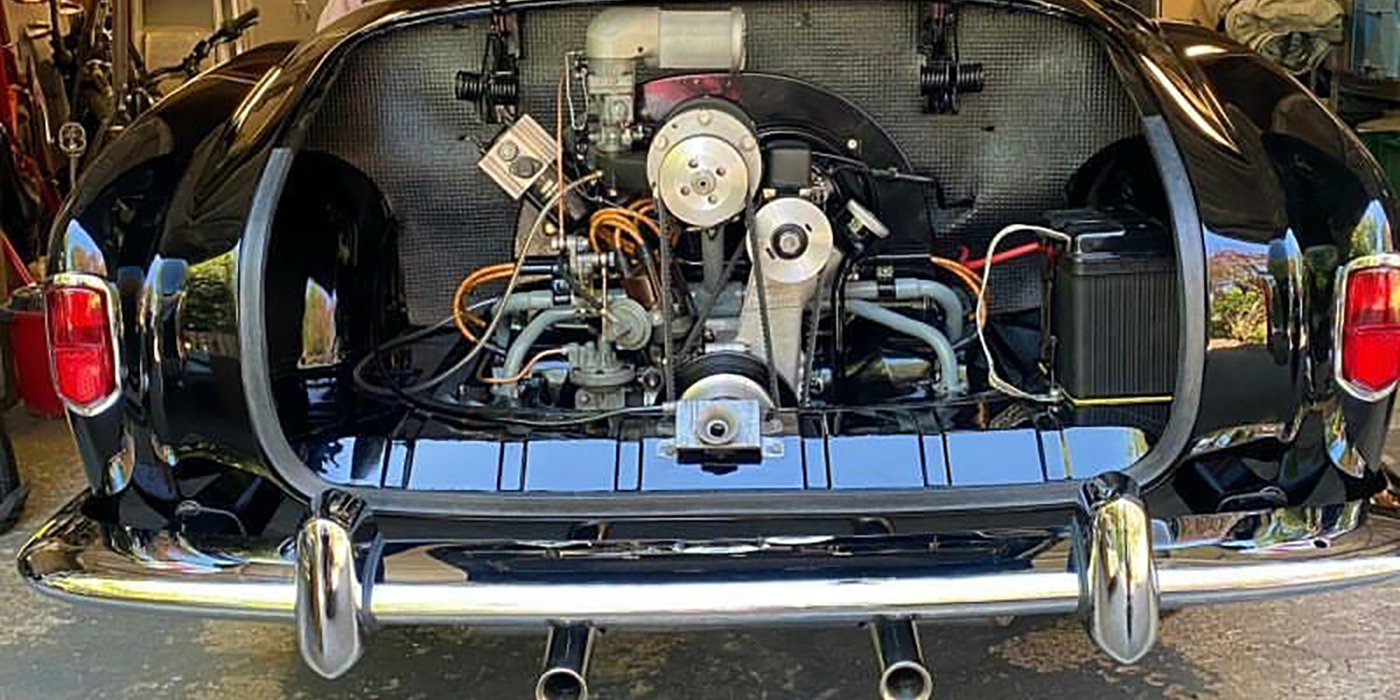 Recently, Bruce Engineering finished a build for a customer with a Volkswagen Lowlight Karmann Ghia, a very rare and early variant of the Volkswagen Karmann Ghia built between 1955 and 1959. The engine is based around a mid-‘50s 30-hp engine case and a rare Judson supercharger kit. Check it out!

One thing we love about social media is the reach it allows us. As we’ve grown our Instagram channel to more than 90K now, we get engagement from people all over the world. One such example is Michael Bruce, a 27-year-old engine builder in Hertfordshire, England who owns and operates Bruce Engineering.

Michael grew up around cars thanks to his stepfather’s business that dealt with VW and Porsche work. Michael’s grandfather also worked on old buses and trucks, so Michael had nowhere to hide from catching the automotive bug.

“We have always worked on classic and vintage cars, but the engine building side started on my own vehicles and grew to become part of our business and a service I have now offered for the last five years,” Bruce says of his shop Bruce Engineering.

Bruce Engineering is a small, father and son family business based in Hertfordshire, England. The small workshop carries out day-to-day repairs as well as engine rebuilds on all sorts of classic cars, but the primary focus is on period tuned VW and Porsche engines from the 1950s.

“While VW and Porsche is the focus, we will also do work on other brands based around the air-cooled engine.” Bruce says. “We’ll work on Fiats and we also have a few BMC Minis and we did a Lancia V4 engine restoration last year to be different. We try to take on all aspects of engine rebuild work in-house. However, we also work alongside local machinists who carry out crank grinds and our case boring.”

Recently, Bruce Engineering finished a build for a customer with a Volkswagen Lowlight Karmann Ghia. The Lowlight is a very rare and early variant of the Volkswagen Karmann Ghia. Initially built between 1955 and 1959, the redesigned Karmann was recognizable by the little extra taillights and the little air inlets at the front.

The engine is based around a mid-‘50s 30-hp engine case and a rare Judson supercharger kit that is a period aftermarket tuning kit. Bruce Engineering also had an original Okrasa stroker crank that the shop incorporated into the build.

“My customer had collected some great period parts for this project, but we also wanted an engine that performed and gave great power down low and had good drivability,” he says. “The case was inspected and aqua-blast cleaned. The case was machined to take an 80mm barrel “big bore kit” and the original cylinder heads were machined to take the larger barrel. We had the challenge of combining an Okrasa 69.5mm crankshaft that required some clearancing to the connecting rods and engine case. Custom barrel spacers were made due to the longer stroke to get piston deck height and compression ratio where we wanted in order to work with the Judson supercharger.

“We have 7.2:1 compression and a massive 6 psi of boost. The final engine size is 80mm x 69.5mm and 1,397cc. Originally, this engine would have been 1,192cc. We are also using a Porsche-style lightweight 8 dowel flywheel supplied by BBT. The camshaft has remained VW to work with the Judson and keep the engine power down low in the rev range with a max rpm of 5,500 rpm.”

According to Michael, these old Judson superchargers cannot be modified to make more boost due to the heat issues and potential damage to the veins. To keep the engine running well and at good temperature, Bruce Engineering outfitted the engine with a deep oil sump, which is important on these early air-cooled engines as they are as much oil cooled as air.

“Originally a 30-horsepower engine, we’ve nearly doubled the horsepower output to the 50-60 horsepower range with good torque down low,” Bruce says. “The engine is now in the car and in the testing and tuning stage.”