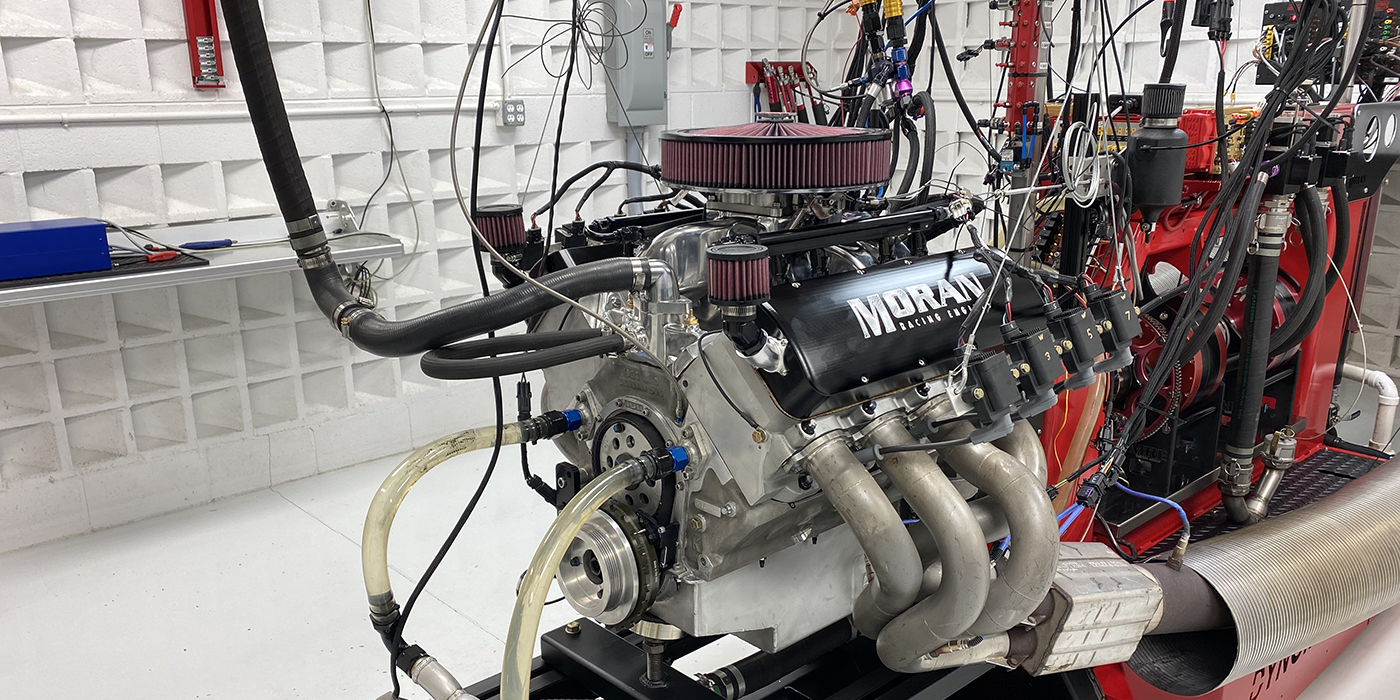 When customers brought in a vintage, Lingenfelter-built, big block Chevy engine, Mike Moran was given free reign to do what was necessary to make more horsepower. Find out what Moran Motorsports did to upgrade the engine and just how much horsepower it picked up!

Mike Moran and his engine shop, Moran Motorsports, don’t need much of an introduction these days. Mike has been around racing and engine building since the late-‘80s and early ‘90s, and is well-known for his racing accolades and engineering firsts.

Moran Motorsports is located in Taylor, MI inside a 24,000 sq.-ft. facility that’s as clean and organized as you’ll see any shop be. That’s thanks to a dedicated staff member who keeps the shop, and the cars, in top condition. Moran has a staff of roughly 10 people who help him churn out high-horsepower race engines, as well as engineering, engine installs, fabrication, tuning, and wiring work.

If you’re interested in more of Mike’s background and history about the shop, or want to know more about his own engine project, the Motor City Billet Bullet Hemi, for his personal race car, click here. The Engine Builder team recently stopped by Moran Motorsports while we were in Michigan and sat down with Moran to talk about a number of exciting things the shop has going on this summer.

One of the things we couldn’t resist was the big block Chevy engine he had on his custom-built Land & Sea engine dyno.

“It’s a big block Chevy that was built by John Lingenfelter,” Moran told us. “This block is very vintage. In fact, it’s a Donovan block from the late-‘80s. It’s been out and about running for the last eight or 10 years and the customer came to me about freshening the motor up. They brought the motor here this past winter and gave me the freedom to do whatever I wanted to it to make some more power.”

To get a baseline horsepower number for where the engine currently was, Mike did some modest tuning and strapped the engine on the dyno. It cranked out 822 horsepower.

“I told the customer, I can guarantee you 80 horse,” he says. “The customer asked if I could gain him 100 horsepower. I didn’t want to guarantee those types of gains. I wanted to wait and see what it did. However, in the back of my head, I figured I could give them 150 horsepower, so I take that number and cut it in half usually, because I try to under commit and overachieve.

“Too many people get in trouble by saying they’ll give you 150 horse and then they can’t deliver. I think I can get 150, so I tell them 80. He wants 100 and I know I can make way more than that. I do the same thing when it comes to the time it takes for the job. I’ll tell them six months and I’ll do it in three months.”

Once Mike and his customers settled on a horsepower goal, he got the engine apart and decided to essentially change everything on it and pretty extensively re-engineered four primary components he wanted to reuse – the block, crank, heads, and intake.

“Obviously, there are a lot better parts available today, but without just scrapping the whole entire engine, I was trying to utilize some of the key players over again,” Moran says. “In order to do that, the components we kept all had to be reworked to today’s standards. For the block, I called Kathy Donovan about putting lifter bushings in it, because I wanted to do something to control the oil because it just had big holes in it,” he says. “I wanted to design a lifter bushing with radius groove oiling and restrict the oil. She informed me that I shouldn’t bore the block any bigger because the blocks were very thin back then, so it limited me on my design. That was a week of phone calls and getting everybody together just to fix the lifter bushings much less the cam tunnel.

“Once I got all that squared away and had a goal in mind, then I pulled all the sleeves out. It’s all based off of a big block Chevy, so it’s 4.840˝ bore spacing, and it’s got an early model Big Chief head on it from ‘90-‘91, which is a really good head for what they’re doing. We reworked the heads, and once that was all said and done, I still had to fit it all within the framework of the ‘56 Chevy [it was going in].

“I couldn’t get crazy with anything big or anything poking out, so the coils are a no-brainer because I can hide them up under the fenders, and the distributor that was banging up against the firewall is now gone. We made it more ergo and more friendly for getting in the car and working on it.

“The crank was probably the least amount reworked and it still had a ton of work in it because it used to be an external balanced crank. We turned it into an internally balanced crank, which took 14 slugs of mallory. It was a bunch of work to get it to what it needed to be. We did all the balancing work in-house, which was tricky, but at this point I could see the writing on the wall that it was going to be pretty easy to make the power we wanted.”

The components Moran Motorsports decided to replace were primarily custom made and somewhat exotic. The pistons are 480-gram Diamond pistons, which are lightweight pistons because the engine is normally aspirated. It’s also utilizing a thin, steel ring pack.

“If you do the finish right and use the lighter-weight rings and the lighter cross section, it’s going to bring more power,” he says. “How you get it to live is you get the rings coated – you get them titanium tungsten nitrided. As long as the hone isn’t aggressive, it doesn’t rip the face off and it gives it longevity. That adds three weeks of delivery time and it adds $300 to the price of the rings, so it’s a $1,200 ring set, but it’s worth it.”

Moran also opted for a set of steel connecting rods, Trend wrist pins and pushrods, Jesel rockers, and COMP Cams springs, keepers and retainers. When it came to the finishing touches on this big block Chevy, Moran wanted to create some custom valve covers.

“My engineer Anthony drew all the valve cover stuff up for me,” he says. “We went over the design together and approved it. We’ve got many different CNC shops we deal with, but we sent the file over to Visner Engine Development because he could cut them the fastest. Visner cut the covers for us, we got them back and put our baffling in them. It was just six days that we went from concept to a finished product with the valve covers.”

Mike topped off the Chevy build with the new Gen IV EFI coil on plug to make tuning the big block easy, and then it was time to see what these changes meant to horsepower.

We were certainly impressed as well, and loved getting the chance to see and hear this engine do some dyno pulls in person!