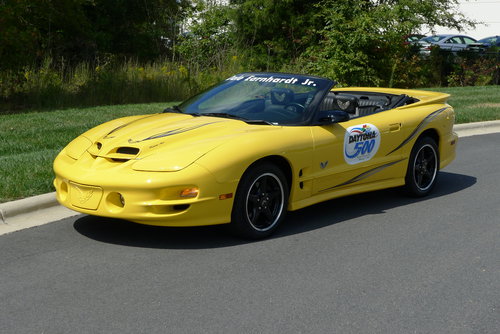 Celebrating the end of 35 years of continuous Pontiac Firebird production in 2002, the fully-equipped, limited-production Trans Am Collector’s Edition (including just 1,041 convertibles) was selected to pace that year’s edition of NASCAR’s season-opening Daytona ‘500’ race. 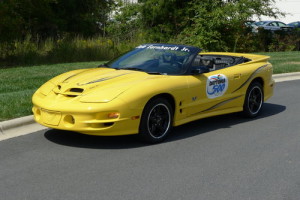 The Russo and Steele Sports and Muscle in Scottsdale will be held January 15-19, 2014.

Famed entertainer Jay Leno, who drove the official pace car, stated the Trans Am had “…lots of horsepower, lots of torque….it’s very fast!” Unlike most other production cars used as Daytona pace cars in the past requiring extensive modifications to perform their duties, the Collector’s Edition Trans Am required no mechanical upgrades.

In fact, the only modifications were special identification decals and a light bar! The pace car was supported at Daytona by a number of special Collector’s Edition Trans Ams, including the stellar example on offer, which carried the starting drivers for the ceremonial pre-race driver introduction laps.

This outstanding example is documented in a letter dated February 2002 from GM’s Pontiac Motor Division as one of the 43 Trans Am Collector’s Edition cars used officially for the driver introduction laps. This one carried none other than Dale Earnhardt, Jr., the immensely popular and successful Rick Hendrick Motorsports driver.

It was acquired directly from Hendrick Performance by world-renowned artist and designer, Sharie Hatchett Bohlmann, aka “Roxy.” As recently stated by Ms. Bohlmann, “Now the time has come to release this one-of-a-kind collector car to a new family, respecting this fabulous vehicle’s lineage and as a rare collector opportunity to invest in this automotive art piece.”

In addition, the Trans Am was autographed by Dale Jr. on the driver’s side visor, and by Rick Hendrick on the passenger-side visor. A fantastic group of licensed memorabilia from the Dale Jr. and Hendrick collections is also included.