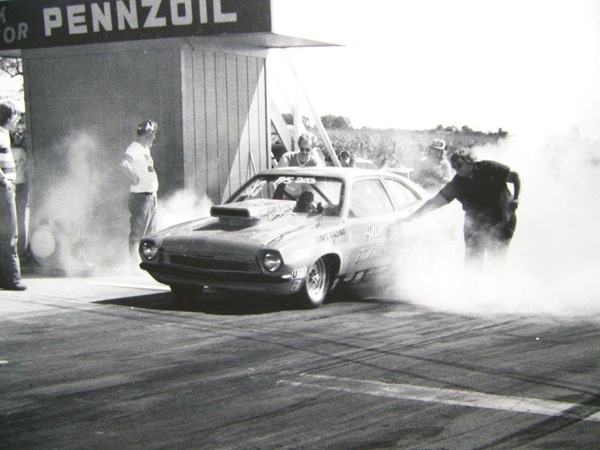 My transition in 1975 from bracket racing a 122˝ wheelbase mid-eleven second, two-ton ’57 Mercury to racing in a low nine-second 99˝ wheelbase, Pinto Pro Stock car, was quite a jump. I was jaded with bracket racing and wanted to run heads up – all out with a door car. So, Pro Stock was it.

In September of 1975, I bought a used  UDRA/Chicagoland Pro Stock Pinto called “The Stone Pony.” It was a serious player –

engine was a 366˝ Gapp and Roush Cleveland coupled with a Lenco 4 speed and Dana rear end. Rear suspension was a four link, Panhard bar, and Koni coilover double adjustable rear shocks. The Pinto had been running low 9s at 150-mph +.

However, my drag racing philosophy was about to radically change. My goal with bracket racing was to pick a comfortable break out, be consistent, cut a good light and know when to take the stripe and when not to. Also, endurance is a must to go many rounds at a race and for the season.

Once a comfortable E.T. was established and you could go rounds, tuning or further modifying to go quicker was not wise.

I worked hard at the above mentioned recipe, and it often paid off. I won a healthy share of Run Tuff Eliminator bracket events and the ’73 and ’74 Oswego, IL, Track Championships. 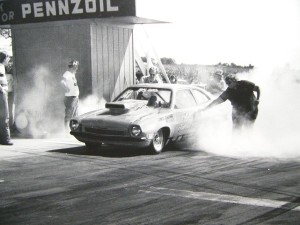 As time went on in my Pro Stock career, I learned many things about the car as a package. But maximum horsepower was still the main ingredient.

Moving into Pro Stock was much different. Horsepower was the key factor. You ran all out, heads up. I had to get a ProStock license, and keep up with changing safety rules as well as performance and modification rules. The car had a minimum weight requirement.

Driving with a Pro Start four-tenth single yellow bulb was no problem. I found it easier than a full 5-bulb tree. Going three seconds quicker and 35 mph faster in a much lighter and shorter wheelbase car, I got used to it quickly, and it was a blast.

As I said earlier, keeping the Pinto competitive, qualifying and go-rounds within the rules was another matter.

The former Portage, IN, Pinto owners, Mark Seaman and Pete Rich were a big help.

Due to business demands they were retiring from drag racing, so they were willing to show me all they could. As I got to know them, I realized it was a matter of pride. They wanted me to do well in a car they built.

When I decided to buy the Pinto, Mark and Pete had my crew chief Rick Davis and I come for the weekend. The Pinto was still apart like when I looked at it the week before. The Gapp and Roush engine was apart. So were the Lenco 4 speed, Hayes Pro Stock Clutch and Dana rear end. For two days, Mark and Pete had Rick and I help put it all back together, teaching us as much as possible.

By Sunday, the Pinto was ready. US 30 Drag Strip was only a short distance away. Being early September, US 30 was open. All four of us took the Pinto to the track so I could make a couple timed runs.

Mark and Pete’s driver and UDRA Pro Stock Champion Joe Gouger met us there. He showed me what to do. At the trailer, Joe had me sit in the car and talked me through mock runs.

We went up to staging. We planned to make an easy run, so we kept the rpms 1,000 lower than an all out run. When my turn came, I drove just as Joe instructed. The little Pinto rang up 9.50 at 150 mph. Wow! I knew this car would run low 9s all out.

In April of 1976, I did my Pro Stock NHRA license runs at Byron. It all went smooth. The track owner Ron Leek let me run all six license runs in one day.

As time went on, I learned many things about the car as a package. But maximum horsepower was still the main ingredient. 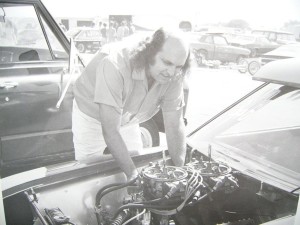 In the ’70s, most all Pro Stock drivers were hands on mechanics and/or engine builders and worked on their own cars. No big crews – usually one or two volunteers or a partner or spouse.

In the ’70s, most all Pro Stock drivers were hands on mechanics and or engine builders and worked on their own cars themselves. No big crews. We usually brought in one or two volunteers or partner or spouse.

To keep up in Pro Stock, I got more involved in engine efficiency than ever before. I learned head porting, using exotic parts, special tolerances, torque honing skills, different balancing methods, filling blocks with epoxy, keeping slipper skirt that punished cylinders alive and round.

I learned things like the importance of piston to head quench clearance. The first time I pulled the heads off that Cleveland, I could see the machining marks in the soot on the flat part of the pistons.

Alarmed, I called Jack Roush and he told me that is exactly how it should look. The tighter that quench area can be compressed safely, the more power will be made and less chance of untimely detonation making it possible to run more timing.

Going with the Flow

Jack Roush was my mentor in

those days. As my Pro Stock effort progressed I bought a couple more Roush engines and parts.

Roush would coach me along. And eventually I built my own Pro Stock engines.

During my Cleveland Small block era (1975 to 1983), I had many of these engines ranging from 339 to 430 cubic inches. Some with Can-Am Aluminum blocks and Furnace Brazed Blocks.

Before long, I got myself a flow bench. I worked with it constantly. For myself and for my customers, it created a whole new business. I worked on any kind of brand of engine imaginable.

I got into serious porting, learning  much of it from my efforts in Pro Stock racing and affiliations with the likes of Jack Roush and other big time engine builders, racers and manufacturers.

I used lot of this knowledge, where appropriate, with my customer’s projects as well. 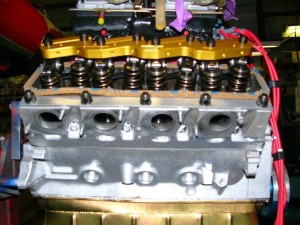 Even though a Cleveland head had great flowing attributes, they still
received serious modifications. That’s why they were so dominant back then.

Induction was a highly modified tunnel ram with two modified 1050 Holley 4500 Dominators. Sheet metal intakes were not in vogue yet. Production tunnel ram castings were hacked, plenums reversed, extensively ported, welded and epoxied with Devcon inside and out. No two were alike.

Heads were a huge determining horsepower factor. The photo on page 16 is an example of a Roush Pro Stock Cleveland head by 1980.

Even though a Cleveland head had great flowing attributes, they still received serious modifications. That’s why they were so dominant back then.

First, the exhaust side had 1.400˝ milled off. An aluminum plate that thickness 2 5/8˝ high was bolted in place relocating the exhaust ports higher. This was known as high porting. The original iron part of head port was welded or brazed and recontoured to match the plate port, making the exit as smooth and straight as possible. The longer you could keep the primary header tube straight off the port, the better the flow. A 19˝ long 1˝ wide X .250˝ thick steel girdle was used on top the aluminum plate. Torque sequence and poundage was also altered.

The intake port also had radical modifications. It was ported to the max flow and the pushrod boss cut through. Then braze or epoxy sealed that area. The intake rocker studs were moved over .250˝ to the right along with the push rod slot. The guides were plates cut, rebridged and welded.

Then blades were carefully installed in the port entrance to calm the turbulence. That blade installation had to be done on a flow bench. If placement was not perfect, it could ruin the efficiency.

Then we had offset dowels to index the head. We reinforced the headdeck by posting. Posting was drilling, tapping and installing 1/2˝ studs into the larger open areas in the head’s deck against the roof. Then mill the deck smooth.

Another must were the 3/8˝ load bolts from the outside ends of the heads through tapped holes nestling against the thin intake seats on #1 and #8 to keep them round. The work done in the combustion chambers was an art form. All was handwork. No CNC.

There were ghost porters back then. A renowned engine builder would work up a sample cylinder, then have a porting talent do the other seven. Jon Kaase told me once he had a porting guy chained to a bench in the basement (I’m pretty sure he was joking!). 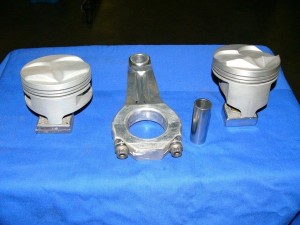 Here are examples of lightweight parts most all SB Pro Stocks ran. The piston on right is a classic narrow cylinder punishing but bigger HP slipper skirt. Piston on left is the stronger but heavier full skirt. The Brooks “Windage” rods were light and incredibly strong. In my 339 cid Cleveland, we spun those parts almost 12,000 rpms.

All this modification was legal. There were limits, however.

Imagine the cost of doing a set of heads like that today. In 1980, a typical Roush Pro Stock engine complete from carbs to pan was only $10,000.

Everything I learned as a Pro Stock, and later as a Pro Modified racer, was a double positive. It benefited me and I passed on what I learned to my customers when applicable.

One huge thing I learned was judgment of cause and effect and how to correct them. I find that not knowing cause and effect is the biggest problem with the novice hotrodder. Not realizing what they are looking at and jumping to conclusions. Therefore, not knowing how to properly correct or move forward.

End of the Run

There is a myriad of information I would have never known if had not become a Pro Stock racer. I could write a million words on this subject.

As the years passed and I moved up, I won more races, championships and awards.

Much of what I learned in almost 50 years has become rudimentary to me, but is probably unknown to some general hot rodders or technicians.

Today, that situation is better thanks to trade magazines like this one. n