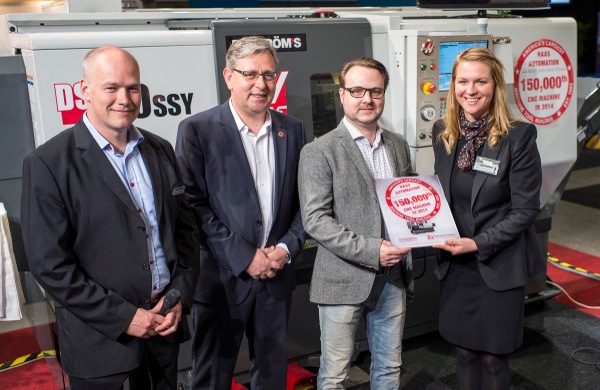 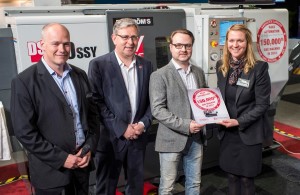 Haas Automation, Inc., has announce another major milestone in the company’s history as one of the world’s leading machine tool builders – the production and installation of the 150,000th Haas CNC machine.

It was a mere seven years ago that Haas Automation celebrated the installation of its 75,000th CNC machine – a VF-3SS purchased by a family-owned machining business in Baden-Wurttemberg, Germany. The 150,000th machine – a DS-30SSY dual-spindle turning center with Y axis – rolled off the Haas production line January 19, 2014, and was installed at Swedish company Claesson Engineering in March, following a special handing-over ceremony at the Manufacturing & Automation Expo (MAX) in Stockholm, Sweden.

“Installation of the 150,000th machine is a very special occasion for Haas Automation,” said Alain Reynvoet, Managing Director, Haas Automation Europe. “The fact that it has been bought by a European company – in the relatively high-cost region of Scandinavia – is further proof that the Haas combination of value, performance, reliability, and support is the right one for any market.”

Haas CNC machine tools are sold worldwide through the company’s 170+ Haas Factory Outlets (HFOs) – dedicated, independently owned Haas resellers who have reached the high-levels of service and support demanded by Haas Automation. The 150,000th Haas CNC machine tool is supplied and supported by the Swedish HFO, Edströms Maskin AB, Jonkoping, one of the longest-serving and most successful HFOs in the world.

“It’s a great honor for us to be part of these celebrations,” said Edströms company owner and CEO, Ola Andersson. “Claesson Engineering is a valued customer, and has already invested in several Haas machine tools over the years, since it was founded in 2000. This celebration is a wonderful opportunity to recognise the achievements of all those involved, but the important thing is that the Haas machine will give the customer many years of profitable, reliable service.”