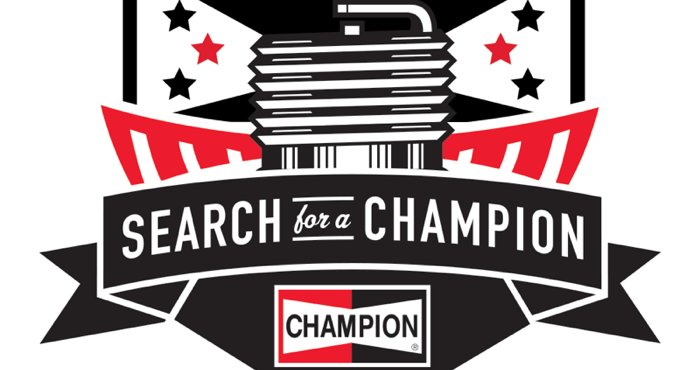 Voting is now open at www.AlwaysAChampion.com for the final round of the 2016 “Search for a Champion” racing sponsorship contest, which will award a record $200,000 in sponsorships and related prizes to grassroots drivers across North America. Finalists include 15 drivers in the Advanced category who will compete for a $50,000 Champion grand prize sponsorship, and 25 amateur drivers vying for one $10,000 grand prize sponsorship from Champion. Champion spark plugs, filters and wipers are global vehicle components provided by Federal-Mogul Motorparts.

Now in its fifth year, Search for a Champion enables grassroots drivers to compete for sponsorship cash and other prizes based on materials submitted for voter review at www.AlwaysAChampion.com. Entrants in the Advanced category were required to submit photos, a 300-word essay and a two-minute video describing why they deserve to become a member of #TeamChampion. In the Amateur category, participants were required to submit photos and an essay, with the option to enter a video. More than 119,000 votes were cast in the contest’s opening round.

Voting is open through March 23, 2016. Anyone may vote once per day per tier in the final round of competition by completing a free registration at www.AlwaysAChampion.com. Federal-Mogul Motorparts will announce the $50,000 and $10,000 grand prize winners March 30.

In addition, each voter in the Search for a Champion contest will automatically enter a drawing for one of 200 Champion prize packs that include a Champion hat, t-shirt and decals.

“The racing community has an incredibly strong connection to the Champion brand based not only on our continued product leadership, but also because Champion has always been a strong proponent of grassroots motorsports enthusiasts,” said Laura Soave, chief marketing and communications officer, Federal-Mogul Motorparts. “This exciting annual contest builds on the brand’s heritage of helping millions of customers worldwide maximize the performance of their engines and vehicles and other equipment.”

In addition to the opportunity to compete for the $50,000 grand prize, each of the 15 finalists in the Advanced category will receive a $5,000 racing sponsorship. These finalists are:

The 25 amateur finalists will each receive a $1,000 sponsorship while moving on to the final round and a chance to win the $10,000 grand prize. The full list of finalists in the amateur category is available at www.AlwaysAChampion.com.