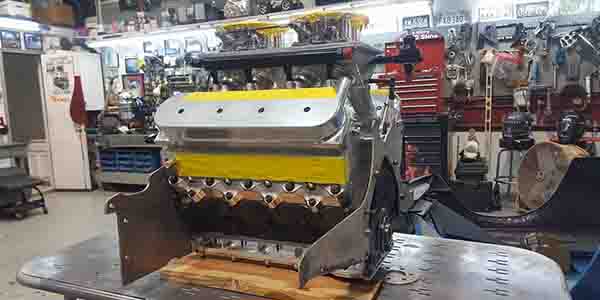 Jim Gray has a rich history in racing. Not only does he own Venom Racing Engines, but he has been in the industry for quite some time as both an engine builder and performance racing instructor.

“Before buying this business and creating Venom, I had a pretty extensive history with a lot of people in drag racing because I had dealt with them through the other shops that I either owned or worked at,” says Gray. Then as a high performance racing instructor at Ranken Technical College I was able to work with a lot of people in the industry and the lower-budget race teams.”

After five years of race instruction, Gray got the opportunity to once again own an engine shop from a man looking to retire from the industry.

“He had all top-of-the-line Sunnen equipment that he had purchased within the last 10 years,” Gray says. “He was just ready to quit and I literally bought everything and he gave me the keys and went home. We formed the new name, Venom Racing Engines, and here we are today full steam ahead.”

Case in point, customers Andy Loyd and Gene McFaddin, owners of a 2002 F-body Camaro they call SloPoke, turned to VRE for an engine to run at this year’s Bonneville Speed Week.

Andy Loyd and Gene McFaddin are pretty well-known in the land speed record world and are commonly found at Loyd’s garage, Bad Andy’s Speed Shop. Andy and Gene will also be joined by Josh Ledford, who is a world-renowned tuner at Pro Line Racing in Georgia.

“They run in a class called C/Gas Altered at Bonneville, which means you can’t run any fuel other than gasoline and cubic inches are limited to 372,” Gray says. “I think the current speed record is 234 mph. Andy contacted us and wanted to break that record by a good bit. So we sought out to build enough power to do it.”

VRE started with a 369 cid, small bore Dart LS Next block to develop a custom, in-house racing package for.

“We went with the small bore block because Andy was concerned with rpm out on the salt flats because they have to be wide-open throttle for so long,” he says. “He was really not wanting to have a 10,000 rpm engine that peaked at 10,000 rpm, so they wanted to keep the engine essentially under 9000 rpm and we added a little bit of stroke to the engine. It’s a 4.030˝ bore with a 3.622˝ stroke.”

VRE then machined the block to add 55 mm roller cam bearings. Jim says this was done to have the ability to shut off the oil from going to the cam and to control it at the main to accommodate running at wide-open throttle for a long period.

This Bonneville engine has a laundry list of parts that Venom hopes will propel SloPoke to more than 240 mph.

On top of the Dart block, the engine has a set of MAST Motorsports Str8jacket small bore cylinder heads.

“We sent the MAST Str8jacket heads to Jesel and they made rocker arms for it, which were an absolutely perfect fit,” Gray says. “They did a fantastic job. Grant Holcomb at Jesel took care of that for us, and they are nice pieces.”

VRE also designed a custom camshaft for the engine. The shop turned to Cam Motion to help grind it.

“All of our cams are from Cam Motion,” he says. “We spec them all in-house and Cam Motion will grind us anything that we want. They don’t question anything and they’ve been great to us. We’ve done a lot of R&D on supercharger cams and stuff like that and they ship out stuff right away so we can get engines on the dyno to test. We’re pretty loyal to Cam Motion because they’re pretty awesome.”

The parts don’t end there. Gray used a Callies Magnum crankshaft, Molnar Technologies H-beam billet connecting rods, and custom CP-Carrillo pistons that were spec’d in-house. It has a custom M&M Competition Engines sheet metal intake manifold and two Accufab 6500 throttle bodies. VRE then added oil squirters in the main webbing of the block to keep the bottom side of the pistons cool, a Dailey bi-stage, all-billet dry sump system that pulls 25-inches of vacuum at wide-open throttle, DLC-coated Trend wrist pins, and King main and rod bearings. The engine also has a really small, lightweight ring pack in it, Jesel 937 DLC-coated lifters and PAC valve springs.

“Every piece of this engine is pretty trick, custom, one off,” Gray says. “It took a long time to build because every piece of it was something that was custom and took three or four months to get.” 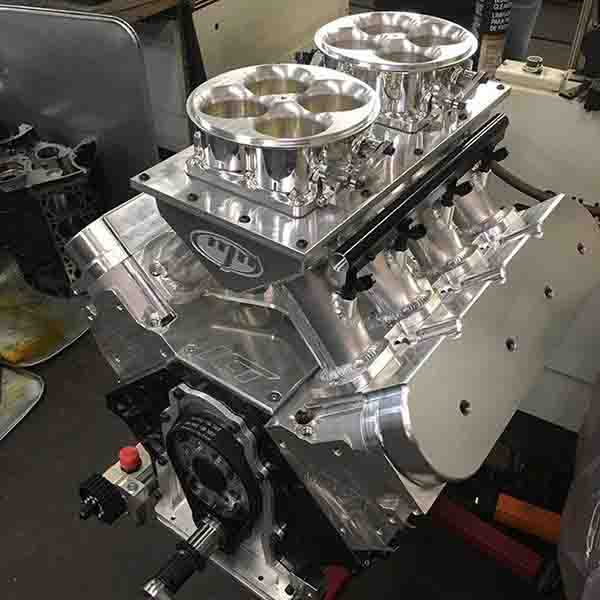 The engine also features Cometic head gaskets, but the rest of the engine doesn’t have gaskets. It’s all O-ring.

“The intake ports are all O-ring and the valve cover rails are all O-ringed,” he says. “We install all the O-rings in-house so everything seals up super nice. That’s one of the ways we were able to get the engine to pull the vacuum that we did.”

To help get fuel through the engine, VRE relied on Fuel Injector Development fuel injectors and a Holley Dominator EFI that the shop tuned in-house.

“Tom Sewel owns Fuel Injector Development and he takes care of all of our EFI injector needs because virtually everything we build is EFI,” Gray says.

Using NGK Spark Plugs, VRE fired up the Bonneville engine on the dyno to see how the build was measuring up to the lofty expectations.

“There were a few snags,” Gray says. “We had a cam sensor extension harness that had something wrong with it that we didn’t know and had to trouble shoot, which took several days on the dyno for us to figure out where our signal error was.

“The other obstacle, other than time, was putting 937 lifters in a LS engine. Doing that doesn’t leave a lot of room for the cam lobe, so positioning the cam was pretty critical. Also we had to machine the cam reluctor wheel off the rear of the cam because the last lifter hit it, so that was a bit of a painstaking process because it was out of the ordinary and not a lot of people put 937 lifters in a LS engine.” 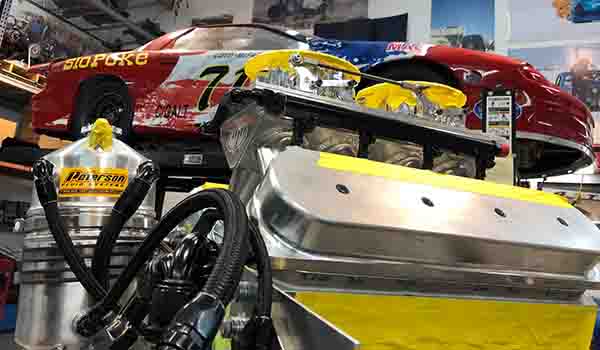 Once those snags were resolved, the rest of the build came together very well, according to Gray. On the dyno, the engine made a naturally aspirated 800 hp peaking at 9,000 rpm and has a little over a 15:1 compression ratio.

The engine has since been shipped back to Andy and Gene in Houston for final preparations before going to the Salt Flats later this year.

“Once the engine is in the car we will be collaborating with them and with Josh Ledford to get it on the chassis dyno and work out any drivability issues they might have,” Gray says. “Since it’s a stick-shifted car, performance is really dependent on whether or not you break the tires loose on the salt. Drivability is really key, so we will work with Josh on getting the tune worked out.”

As far as actual events on the salt, Andy, Gene and Josh are gearing up for Speed Week this year in August, which is where the team hopes to crush the current record. According to Gray, the guys have a good chance!

“I hate to jinx anything, but I can tell you just mathematically the engine we built can rev to almost 10,000 rpm,” he says. “We revved it to 9,500 on the dyno and it functioned flawlessly. The engine was dead smooth up there. The engine should make peak horsepower at 9,100-9,200 rpm. With the gear ratio that’s in the car they plan on running, if they can keep traction from being an issue and stay at wide-open throttle and get to 8,200 rpm by the exit of the course, then they should be able to go 240 mph.

“If they can turn it to 9,200 rpm, they should go well in excess of 240 mph. It all depends on wind resistance and how the engine likes being loaded. It has a really flat torque curve so it should pull really well against the wind out there, but it depends mainly on how soon in the fourth mile they can get wide-open throttle and carry the rpm through. If they can carry the rpm through to above 8,500 rpm, they’re going to far exceed their goal.” 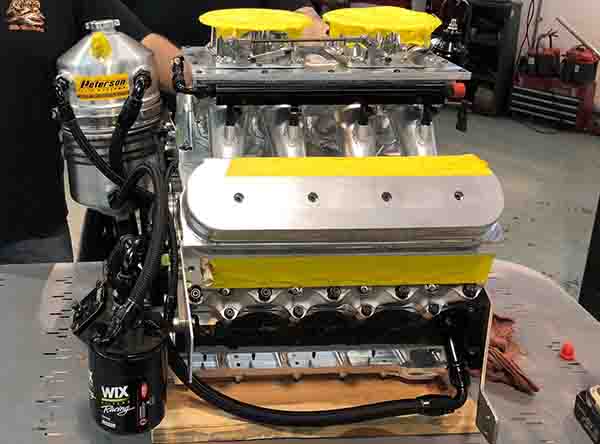 For now, we know Jim and his team at Venom Racing Engines has built a beautiful race engine. Here’s to hoping it’s a record-setter!

Watch the engine make a pull on the dyno: