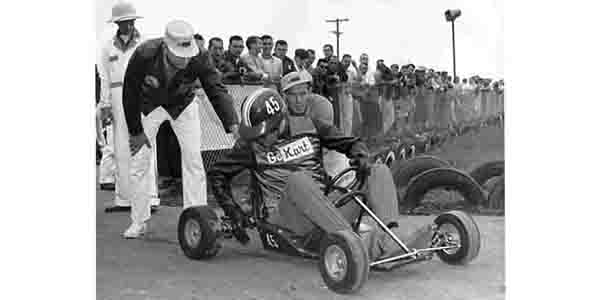 The first ever “go kart” was built by Art Ingeles in late 1956. Art, who would later be referred to as the father of “karting,” was a veteran hot rodder who spent his days working for Kurtis Craft. Yep, the same Kurtis Craft of Indy car fame.

The first ever “go kart” was built by Art Ingeles in late 1956. Art, who would later be referred to as the father of “karting,” was a veteran hot rodder who spent his days working for Kurtis Craft. Yep, the same Kurtis Craft of Indy car fame.

In his spare time, Art designed and built a lightweight tubular chassis that was strong enough to hold his 210-pound body. To that frame he added a set of semi-pneumatic tires and a simple steering mechanism. 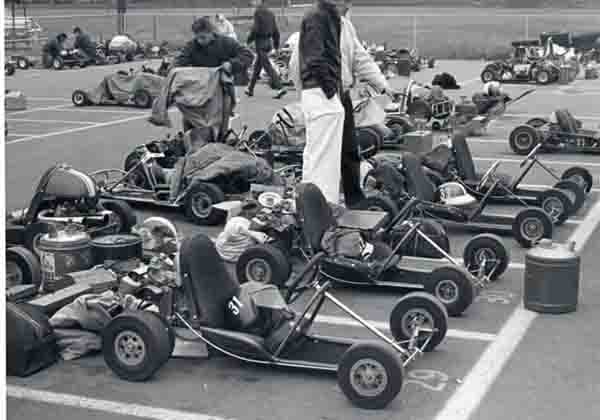 He then mounted a surplus West Bend two-cycle lawn mower engine behind the seat. Using a steel sprocket gear on the engine and another on the left rear wheel assembly, he connected the two using a bicycle chain. Adding a gas tank and some controls put Art in business. When he drove his new creation through back alleys and tennis courts in his neighborhood, crowds of people would gather wanting to know where they could get one too.

Fast forward to 1958. Duffy Livingstone and Roy Desbrow are partners in a muffler shop called GP Mufflers located in Monrovia, CA and are both quite handy at fabrication. After seeing Art’s creation, the two partners decide to build a “car” of their own.

They ended up building a couple of extras for friends, including one for Bill Jeffery, who in exchange did the upholstery for all of the cars. Bill Rowles, a local sales rep and a regular at the GP Muffler shop, found a source for cheap two-cycle West Bend engines from a bankrupt rotary lawn mower company. The GP Muffler Company was officially in the “kart” business. 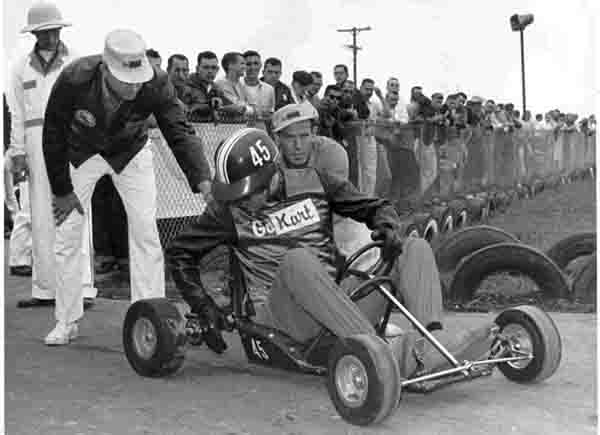 The GP-built karts were officially named “Go Karts” and were sold via mail order for the tidy sum of $129.

Business was brisk, so the two friends formed a partnership and continued to work out of the GP Muffler shop for the next few years. Soon, an average of 30 orders a day began arriving in the mail. The partners decided to form an official corporation and rent a five-acre facility in Azusa, CA from the Aero Jet General Corporation.

A test track was built at the new facility and the company formed a factory race team to promote the product. The “Go Kart“ Company began flying its six driver, four mechanic race team, and seven or eight karts and spare parts to places like Mansfield, OH, Rockford, IL and the Bahamas for major karting events. 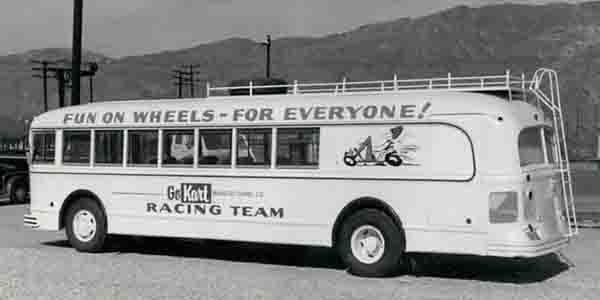 The company also bought and converted a Greyhound-type bus to haul the teams to regional events throughout California. The closest competitor, the Bug Manufacturing Company (located literally just down the street from the Go Kart Company), also bought and converted a similar bus to deliver its teams to the races. Competition between the two companies was fierce both on and off the track. In fact, the teams would often race their transport buses to the next event.

By 1962 (the peak of the karting craze), there were more 30 manufacturers building karts. The Go Kart brand being one of the originals, and one of the most popular, soon attracted the attention of an unlikely buyer…Art Linkletter Enterprises. Art (yes the one of TV fame) offered to buy the Go Kart Company in 1962 for the respectable sum of $750,000 dollars with the terms being $250,000 up front and the balance to be paid at the end of one year. 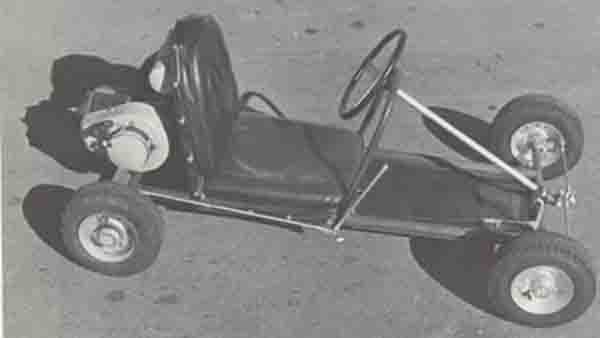 Ironically, in the summer of 1963, barely a year after the ALE offer, the Go Kart Company would find itself filing for bankruptcy, a victim of the recession and slow sales. Most all of the kart building companies followed suit. The karting craze came to an end almost as fast as it began but it was definitely fun while it lasted.