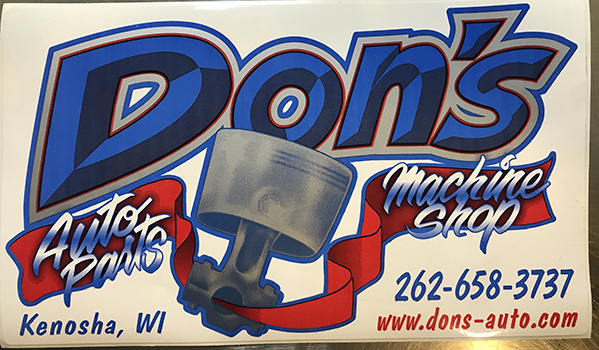 Does it make good business sense to leave a lucrative career as an expert craftsman to take over an aging business serving cars and trucks built long before fuel injection was invented? If you’re Tony Pontillo, owner of Don’s Auto Parts & Machine Shop, it’s not only logical, it provides a great opportunity to give back to a community and an industry.

Pontillo, winner of the 2018 Vintage Engine Builder of the Year award sponsored by Federal-Mogul’s Fel-Pro and Speed Pro brands, is the first vice chairman of the Engine Builders Association (AERA), grew up with a love of cars and began working at the established Kenosha machine shop following high school.

“My father was a car collector, I grew up with motorcycles and I was definitely a gear head growing up. I started drag racing when I was age 16, so I definitely had an interest in engine rebuilding before I came to work at Don’s,” Pontillo said. “Don’s originally started in 1958 as Kenosha Crankshaft – they would actually go out in the field and grind cranks back in the day. In 1961, the focus shifted into being a full machine shop owned by Don Jones. I started working for him right after high school in 1987 and eventually had the opportunity to buy the business.”

Don’s was always just a machine shop, but not “just” a machine shop, Pontillo says. “We were more into the medium industrial market and sport truck, muscle car era as a full machine shop, one of the few shops that did crank grinding in-house even then.”

It was a small shop, Pontillo says – basically only two employees – and he wasn’t sure where his career was headed. After about a decade with Don’s, he moved on and became a certified welder serving the pharmaceutical industry. “However, the company I was working for as a welder was bought out by a very, very large company that ended up changing a lot of things. I also worked part-time for another automotive machine shop in our town during that time. Don had passed away and his son Jim had taken over, so I thought it was the perfect time to approach Don’s about coming back.”

Admitting that it may seem counterintuitive to leave a high paying corporate job to purchase a machine shop, Pontillo says there was a method to his madness.

“I came in with a vengeance – I had a pretty good business plan and I hit it hard and within two years we moved from our 1,000 square foot building to a new location that was about 7,000 square feet. Then eight years later, we moved to our current location, which is 16,000 square feet, and we now have 15 full-time employees,” he explains.

Pontillo has doubled down on Don’s policy of serving a wide range of industries. “My employees always tease me because I can’t say no to anything. It doesn’t matter if it’s an ISX Eagle cylinder head or if it’s a car that was made in 1930, we’ll take it in,” he says. “At least half of our work is vintage – vintage marine, muscle car restoration projects, a ‘1927 Chevy, a Model-T, and flat heads. We just ran through six Chrysler 440s from the late ‘60s as well. 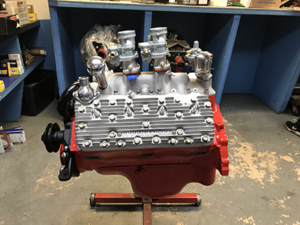 “We’re right up here on Lake Michigan so about 35% of our stuff is vintage marine including old Hercules marine engines and the flatheads. We started taking them in years ago and now we have this niche market – we get them from all over the country.” 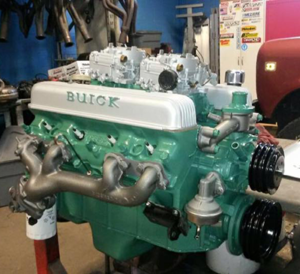 Pontillo says the shop averages seven engines a week, split fairly evenly between those fully assembled and those machined for the customer’s final assembly. 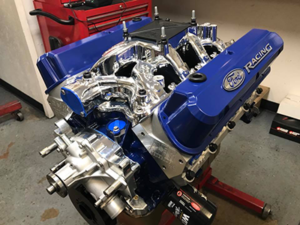 The other half of his business over the last five years has changed tremendously, he says. Three full-time employees work on cylinder heads, though he says they’re doing a lot more diesel and industrial work. “We are picking up cylinder heads at the truck stops,” Pontillo says. “And these are big semi truck models. Now, every time we buy a new piece of equipment for our business, we buy it one size larger.”

Pontillo says this truck business includes performance diesel as well as heavy on-road and off-road vehicles. “It’s just a different market than the other stuff. We are seeing a tremendous amount of the heavy-duty performance vehicle work. I don’t consider us to be in that market like some of the shops that cater to that market, but it’s definitely good work out there for us too,” he says. 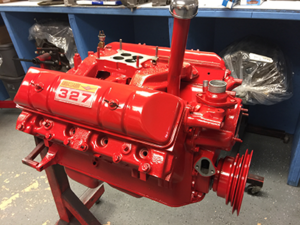 In June 2006, Pontillo bought a local starter and alternator rebuilding company and said it has been a tremendous addition to his business. It’s busy, he said, but it takes a lot of work.

“In addition, we have a driveline company in which we build drive shafts for anything from agriculture PTO shafts all the way up to the big, heavy industrial trucks. Some are custom and some are production runs. We recently built 7,000 drive shafts for an ambulance company in Florida and we also build carbon fiber racecar drive shafts in-house. We do rebuild rear ends here too, but transmissions are the only thing we do not do,” he says. 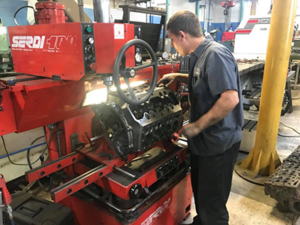 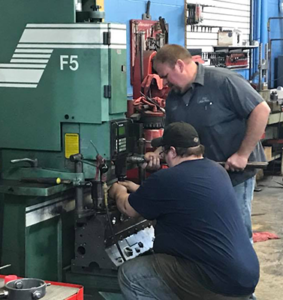 Pontillo currently races a Comp Eliminator B dragster automatic, campaigning down south when business is slow in Kenosha. His 17-year-old son races go-karts at tracks like Road America. His involvement with racing keeps him in touch with his performance customers, though he admits, “It’s a chore to balance all that out.”

“We’ve been members of AERA since Don’s was formed in 1961, so when I took over I just continued that tradition. I definitely have a good relationship with the association and was excited when they asked if I was willing to serve. I have also served on the advisory committee for the Gateway Technical College, the automotive and diesel college here in town,” Pontillo explains.

“I’m also an adjunct teacher at the college for the engine rebuilding program and I enjoy that tremendously,” he says. “When we have engine rebuilding classes, students come here for an eight hour day and we’ll spend the day teaching them hands on. We’ll let them take cylinder heads apart with our guys and see how it all works.” 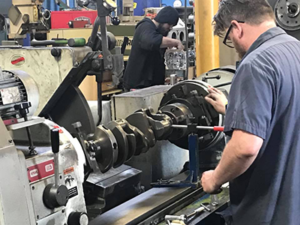 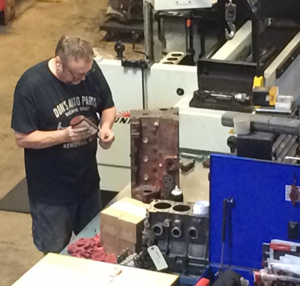 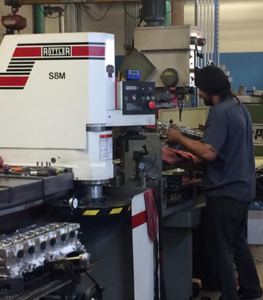 His commitment to the next generation doesn’t begin and end with college however.

“A lot of times we’ll get a father and son – or even a father and daughter –  who are building a car together. If we’re doing a motor for them, we allow them to come and we help us assemble it with us. We started that about 10 years ago and to this day we still do it, probably half-a-dozen times a year.”

Pontillo prides himself on being able to share his enthusiasm for the industry with customers and fellow engine builders alike.

“A lot of times, I’ve had other shops call me and ask how to diversify their business,” he says. “If you walk through our shop, I think you would be amazed to see the range of things we’re working on. Yeah, we’re automotive based but we also take our balancer and we use it for many other things. We’re eager to open up our market share. I think too many shops think that because they’re an automotive machine shop they’ve got to stay that way. That’s not true.”

He gives credit to his staff (including his own 17-year-old son) for continuing to help make all his big plans successful.

“We have 15 regular, full-time employees and we’re reaching across the Midwest. Our radius is 100-150 miles, doing work for other engine builders, machine shops and parts stores across the Midwest. We all joke because we’ve been in this building for just five years, but it is already full to the max. You can’t even walk down the aisles,” Pontillo says. “That’s a good thing, and of course it makes me happy, but at the same time I think my son’s going to have to eventually make some decisions about how big he wants to get.”