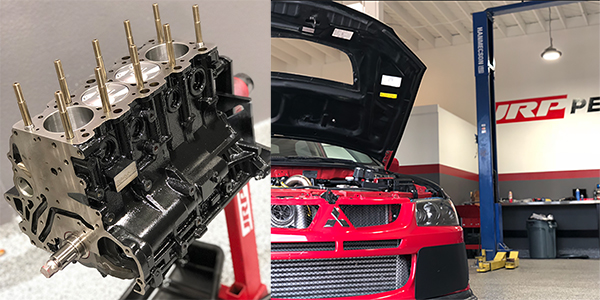 Working as a Mercedes-Benz tech after graduating from UTI seven years ago, Roni Almasi gained some great industry experience. However, it wasn’t long before he turned sour on dealership politics and simply having to repair something back to its original working order. Almasi wanted to build engines with more horsepower and better engineering than they previously had.

His love for engine building grew even more after he bought a Mitsubishi Evo. “I really wanted to get into the engine building side of things, but there wasn’t a lot of good information on Evo engines at the time,” Almasi says. “I had to just do it on my own. It took a lot of research and talking to a lot of other engine builders and machinists that I met throughout the years.

“I started investing in some tools and everybody at the time was telling me I was crazy for spending this much money on engine building tools. They told me I could just pay somebody half of that and get the engine built. That may be true, but it’s not the same as you putting everything together, not somebody else.” 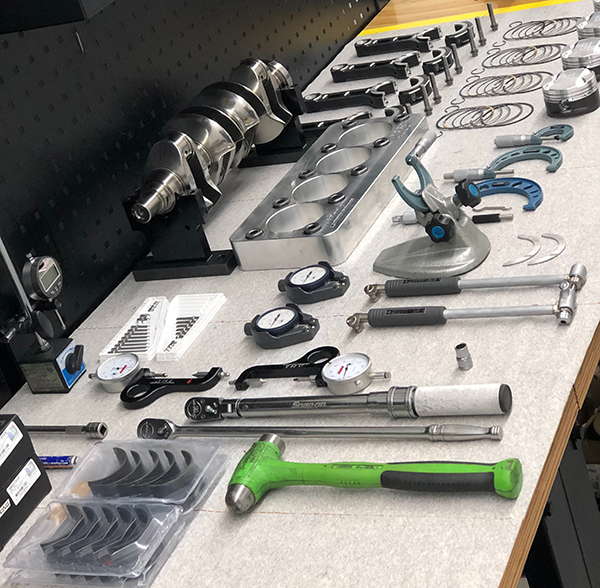 After leaving the dealership, Almasi went to work for another company that focused on Mercedes-Benz, Lamborghini and R8 engine work. There he gained some pit crew experience and eventually became their in-house engine builder.

“At this point, I’d already built a few Evo engines properly, learned about torque plating, proper machine work, plateau honing and more,” he says. “I was never a machinist, but I just learned as I went and just started building engines on the side for people.”

About a year and a half into working there, the company shut down due to legal issues. Almasi left, but this time he turned those side Evo engine projects into an opportunity to start his own shop. Just seven months ago, Almasi and his business partner Jeffrey Velazquez, opened JRP Performance in Bellflower, CA. 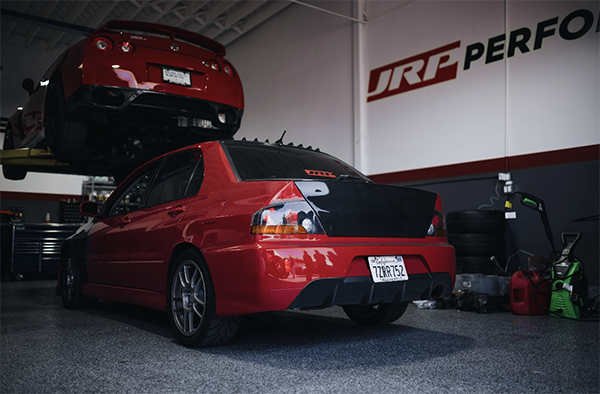 The full-service shop features three bays where it performs engine building and assembly work, transmission work, tuning, maintenance, and much more in-house. The shop averages about six engines a month and utilizes DSport for its CNC machine work.

“I always wanted to do something that was about making horsepower and making something better than it was – that was always appealing to me,” Almasi says. “The main strength here at JRP Performance is the pride that’s taken on every single engine that we do. We do a lot of 4G63, 4B11, VR38 and GT-R engines.”

One of those engines that features all of JRP Performance’s skill set is a 4G63 Evo 8 engine that is half concrete-filled with half-inch head studs, stainless steel o-rings, custom Diamonds pistons and aluminum FFWD Vader connecting rods. 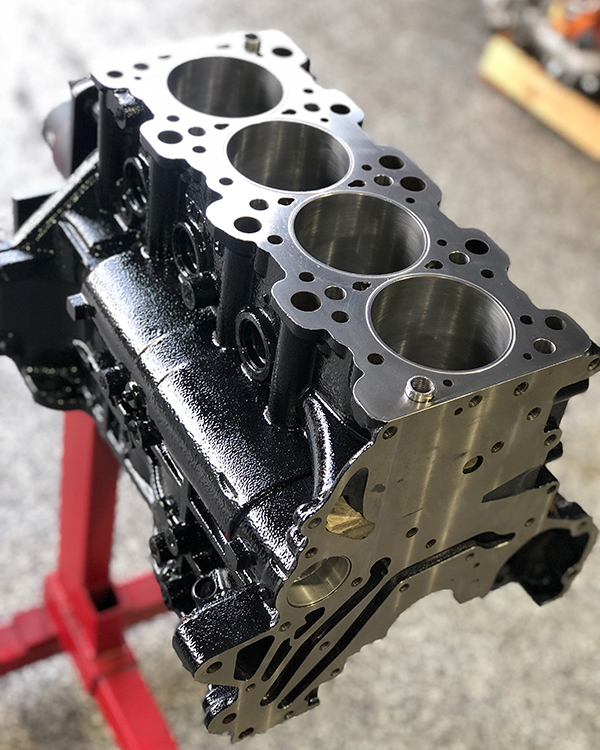 “This engine is a 4G63 for an Evo 8,” Almasi says. “It’s actually using an Evo 9 block, but the only difference is the oil fitting to the cylinder head because the Evo 9 has variable valve timing and the Evo 8 does not. The engine is going into my personal Evo 8.”

The block has been drilled and tapped for L19 half-inch head studs, which are bigger than factory – 12.7mm versus 11mm. However, the special part of the block is the concrete work. 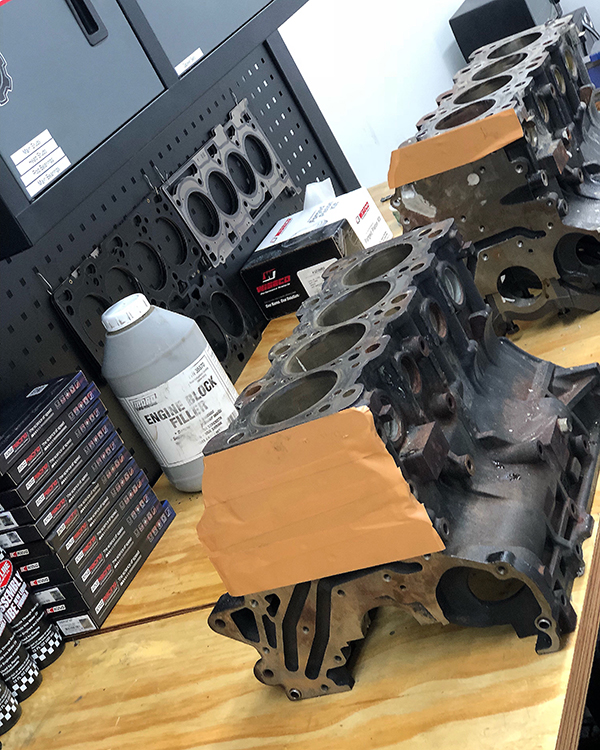 “I used a Moroso block filler – the more water you add to it, the harder it gets,” he says. “It cured perfectly. The reason I did the concrete fill was because on one of our previous builds I had a complete wet block and the block actually ended up cracking at one of the coolant ports. The concrete is believed to reduce harmonics in the engine block, whether it’s half filled, three-quarter fill or full fill. The reason I do that is mostly so the bottom end doesn’t flex. When each cylinder is making in excess of 250 horsepower, there’s chaos going on in there. The concrete allows me to not get super loose with the clearances.”

In keeping with a smooth operating engine, JRP used a 4340 billet 88mm stroke crankshaft from Callies that got nitrided and cryogenically treated to eliminate flex, and has a special finish to reduce windage. 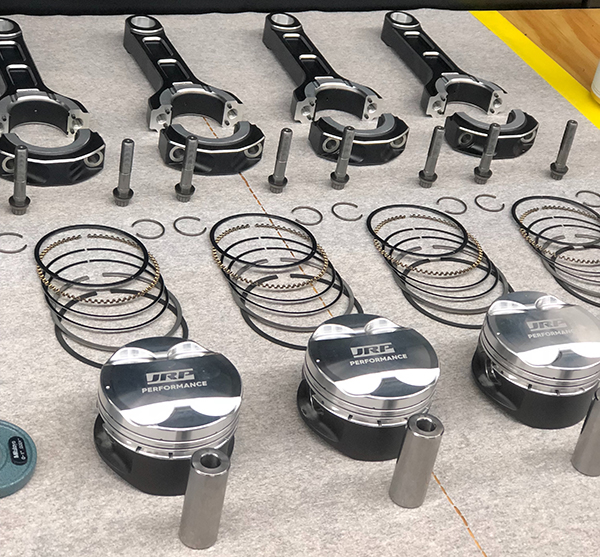 “You want to avoid the deflection of the block when it’s operating at these power levels and these cylinder pressures,” he says. “I believe the concrete does help. The nice thing about the half fill is the factory water pump just bolts up and all three passages work perfectly fine.”

This 4G63 Evo 8 is also a long rod engine, and therefore features 156mm Vader aluminum rods from FFWD. Diamond made a custom set of pistons to go along with a Total Seal ring pack with an AP-grade top steel ring with horizontal gas ports. The engine uses stainless steel o-rings and Cometic MLS head gaskets that are .053˝ thick compressed. It also has ARP 2000 grade main studs and King bearings. 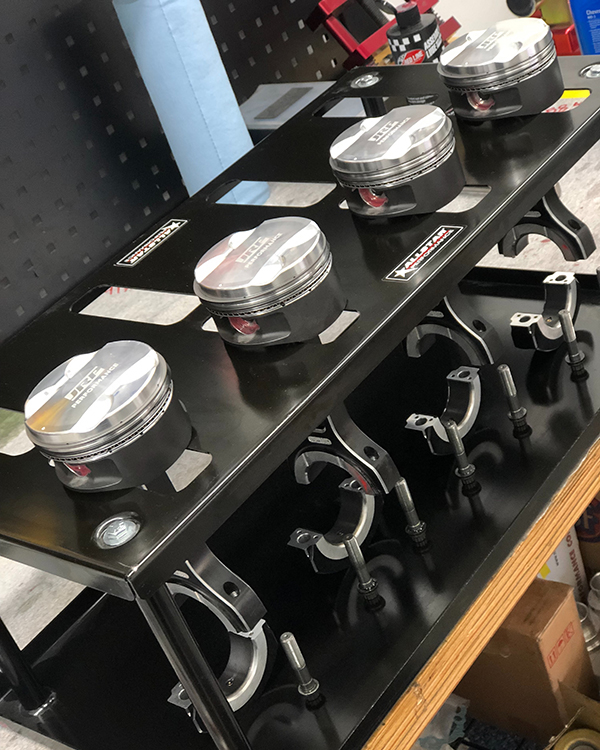 “I’ve actually never used a set of anything but King bearings,” Almasi says. “I’m using half extra clearance shells and half normal shells to get it to the clearance I wanted. We ended up at about .0025˝ on the mains and just under .0030˝ on the rods.”

The 4G63 Evo 8 engine is also running a 72mm Forced Performance Super 99 turbo. The head is modified for half-inch head studs and will feature Kiggly Racing beehive valve springs, which have a seat pressure of 131 pounds without any shimming. For the camshafts JRP is using Kelford 288s, which are 12mm of lift on the intake and 11.5mm on the exhaust. To round out the cylinder head, JRP is using Ferrea Competition Series intake and exhaust valves. 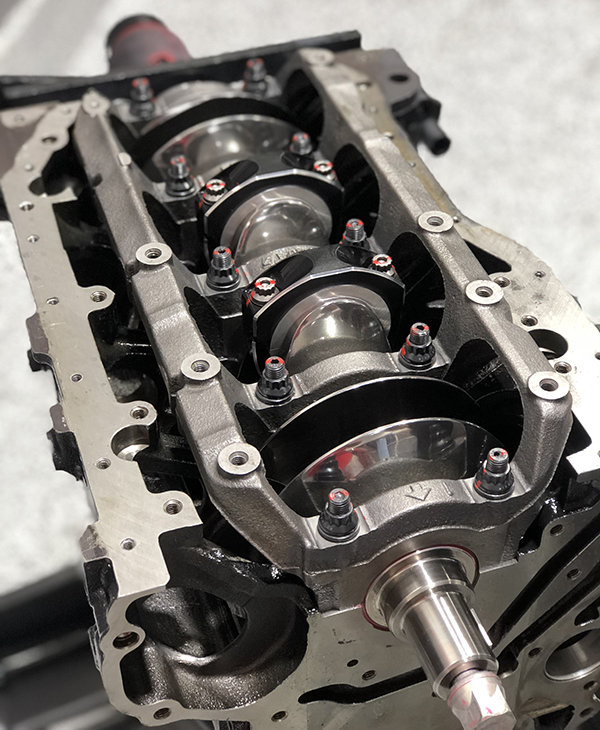 “The head has been fully hand ported and polished here by us at JRP,” he says. “We are going to be revving this thing up to 9,500 rpm.”

The 4G63 Evo 8 engine is solely going to be run on Ignite Racing e90 fuel, which is 114 octane. Using the 72mm turbo, this engine made close to 1,000 horsepower at around 45 lbs. of boost. Future plans for the engine include making a switch to nitrous later on. For now, it should make for one heck of a drag racing power plant. 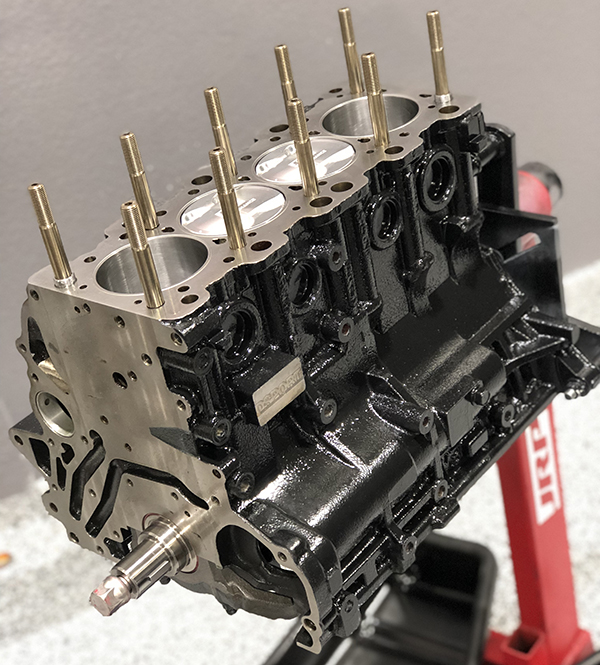