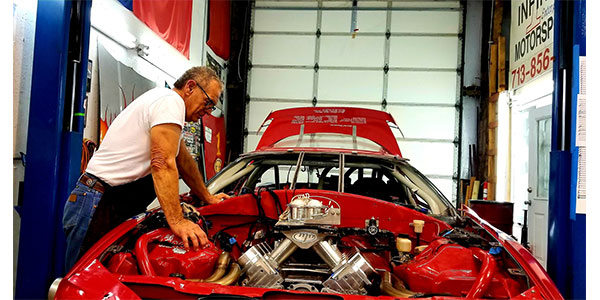 It was late in the afternoon during the middle of the week. I had just walked down to my shop, Bad Andy’s Speed Shop, when I heard a vehicle pull up to my door. A nicely dressed gentleman stepped out of his sports car and walked over to several of my classics sitting in the drive. I had backed them out earlier, in order to get to one of my other projects to work on.

It was late in the afternoon during the middle of the week. I had just walked down to my shop, Bad Andy’s Speed Shop, when I heard a vehicle pull up to my door. A nicely dressed gentleman stepped out of his sports car and walked over to several of my classics sitting in the drive. I had backed them out earlier, in order to get to one of my other projects to work on.

I stepped out to greet him. He immediately noticed the Bad Andy’s Speed Shop insignia on my shop apron and asked if I was Bad Andy. I smiled and shared it was the nickname my friends had given me. He then went on to tell me he had been looking for the sign to my shop for several weeks now and that I had been recommended by a friend of his. He stated that my name had come up in several conversations and he had heard a lot about my shop and the work that I did on ‘60s and ‘70s muscle cars.

He had seen my red ‘63 split-window Corvette and my ‘68 SS/RS Camaro convertible as he drove by. He went on to say that he couldn’t find a phone number to my shop, but found me on Facebook. He wanted to make an appointment to meet me and get a tour of the shop. As we stood in the drive, he saw my red ‘64 Malibu convertible and my two-tone ‘61 Ford F100 Unibody pickup sitting in the bays under my land speed cars – a ‘53 Studebaker and a ‘98 Camaro. He had been told that I set two world land speed records at Bonneville and had been inducted into the 200-mph Club. He was intrigued that someone living in Texas would travel to Utah to attempt that. I chuckled and told him it had been a boyhood dream of mine and that I’m headed back this coming August to attempt two more records!

As we walked into my shop, he spied my silver ‘72 Nova SS and my ‘37 Ford F85 LS1/T56 rat rod pickup I built over 12 years ago. The gentleman then asked if I knew if the ‘63 Corvette or the ‘72 Nova were for sale. They were not. He then asked if this was all the cars I was currently working on. I told him that I had two resto-mod projects, a ‘66 GTO with a 408 LS twin-turbo Stroker and a ’69 Camaro with a LS2 in another building.

He was looking for a reputable shop to build him a mid ’60-‘70s resto-mod to his specifications. At this point, he wanted to know what my hourly rates were for my services. It then dawned on me what he was looking for. I quickly told him I was only a hobbyist and built cars, trucks and motorcycles for myself.

Bad Andy’s Speed Shop is not a business. It’s my sanctuary. I don’t sell speed parts and I don’t build vehicles for customers. All of these cars and trucks are vehicles I admired as a kid. I purchase clapped out or abandoned unfinished projects. I disassemble them, cut out the rust and weld in new metal or replace a complete panel if necessary.

I did learn that I could save money by having my engines professionally built. All of my vehicles, even the Ford pickups, with the exception of the ‘53 Studebaker, ’64 Malibu and the ‘72 Nova SS have LS engines in them! I put Tremec T-56 6 speeds in everything, but the wife’s ‘63 Corvette.

I am not a mechanic, but I am mechanically inclined, and I love to fabricate. I’m a self-taught welder, a better grinder and I don’t mind getting dirty. I learned that I enjoyed the “build” more than owning the car, but I get so attached I don’t care to sell them. I’ve been doing this for 20 years and now have a small collection – all of which I drive!

The reason I don’t build cars for a business is because I don’t want it to spoil my fun. Our son, daughter and grandkids all love coming to the shop to help with whatever I’m working on. I have friends that drop by and end up spending several unsolicited hours working on a project with me. We sometimes work into the early hours of the morning and have the time of our lives!

The man shook my hand again and as he walked out, he said, “This explains why I never saw a Bad Andy’s Speed Shop sign or found a phone number.”

I wished him luck and told him that he was always welcome to drop by. I’ll be dropping by the pages of Engine Builder in the upcoming months to update you all on my various projects and interactions with my engine builders. For now, I’m heading back into the shop!

For the Fun of it