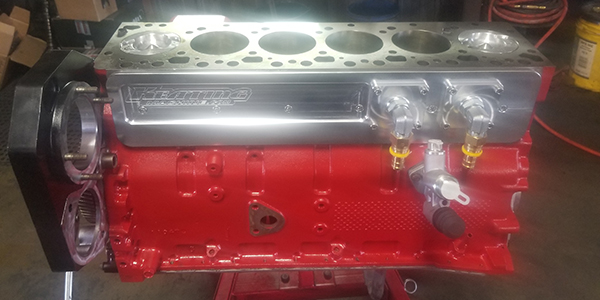 A customer recently came to A-Star Diesel Performance looking for a transmission build. That work turned into an engine build on a 5.9L Cummins for the customer’s ’92 Dodge 1-ton dually, single cab. Find out what went into this compound turbo diesel engine!

Growing up around plenty of farm equipment, meant George Loewen was never a stranger to engines and machinery. Add on a background in construction and you have someone ripe for engine building.

That’s exactly how Loewen found his way into an engine shop and working on diesel engines. He built himself a “pretty cool” 2004 Duramax and word of mouth kept him busy helping friends fix up their trucks.

“After I built my 2004 Duramax, word just started getting around about me building diesels and I started helping people and helping people, and next thing I know I’m running a shop,” Loewen says. “I’ve just always been good at it and learned things over the years.”

George started A-Star Diesel Performance in Abilene, TX about six years ago. Today, he’s known by some as the Duramax whisperer, but he’ll also work on Cummins and Powerstrokes too, as well as transmissions and basic maintenance.

A-Star Diesel’s performance work is focused on drag racing. For its engine builds, the shop relies on outside machine shops, specifically one called Ed’s Machine Shop. The four full-time employees of A-Star do the rest in-house inside the 4,500 sq.-ft. shop.

“We recently refreshed an NV4500 transmission for a customer, and that turned into an engine build,” Loewen says. “We pulled the motor, put stuff together and rebuilt the motor. After everything was said and done, the engine was all right with the NV4500, but we didn’t like it. Instead, we put in a 48 with a manual valve body.”

The Cummins engine block got bored .020˝ over and got goodies like a set of Carrillo rods, Full Blown pistons and a Stage 2 camshaft. In addition, the Cummins features compound turbos, an Industrial Injection girdle and a Scheid Diesel P pump.

“It’s got some pretty good goodies in it,” he says. “The bottom end is stout. We used Power Driven Diesel’s AFC Live – that’s how you control it. When you drive it, it’s really clean.”

The customer has this engine in a ’92 Dodge 1-ton dually, single cab, which he uses as a daily driver farm truck. After A-Star Diesel was done with this compound turbo 5.9L Cummins, the engine put out some nice numbers, especially with the turbos! It makes around 850 hp, but could push 1,000 hp, according to Loewen.