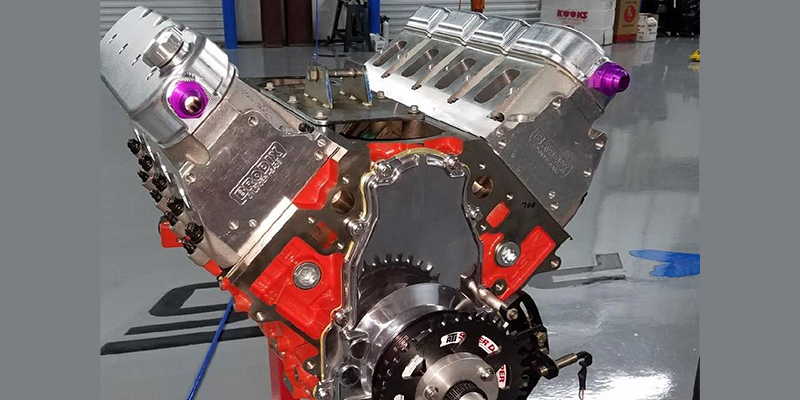 After spending time as a Marine, Kyle Thompson returned to civilian life with a serious need for speed. He started Thompson Motorsports to feed his passion, and today the Texas-based engine shop churns out 550 engines a year like this 440 cid LSX methanol engine for radial drag racing! Find out went into this low 4-second engine build!

Although Veterans Day was yesterday, the timing couldn’t have been better to shine a spotlight on Kyle Thompson, owner of Thompson Motorsports in Nevada, TX, and a former Marine. Kyle was a mechanic in the Marine Corps. and returned to civilian life a little more than 10 years ago. With a passion for motorsports and anything that goes fast, Kyle returned home needing something to occupy his time.

In 2008, he started Thompson Motorsports with his wife as a way to pay for his motorsports habit/hobby. “The intent was to really just help me reduce the cost of my own projects,” Thompson says. “I hired a couple of guys and started doing some in-house work – primarily cigarette boats and race cars – anything that was fun and went fast.”

Thompson Motorsports was more or less a side gig for the first two years Kyle ran the shop, but a growing customer base and consistently busier work schedule started to change the mindset.

“It kept getting busier and busier and around that third year it got busy to the point that I realized I needed to put a little more focus into it,” Thompson says. “I stepped in more full-time with the company and started looking at it as more of a business rather than a hobby. Once I stepped in and we really started looking at it, we started growing at a pretty astronomical rate. Around the fourth year, it had gotten to the point where we decided to quit bringing customers’ vehicles in… and really focus on expanding our engine program.”

“We started with pretty simple builds, and grew with the LS community,” he says. “We were doing a lot of stock blocks with either stock cranks and forged pistons and rods or all forged builds with some ARP hardware or some upgraded hardware and stock-style heads. As that envelope continued to push, we realized the potential of the LS and decided it was time to go ahead and get into the higher level, higher output LS engines.”

That realization meant Thompson Motorsports would have to start playing with the bigger teams, and that’s just what the shop did.

“We started getting in with a lot of the bigger teams that were racing – some of the Outlaw level, methanol, high output builds,” he says. “We also went ahead and started our own team doing No Prep Outlaw and Small Tire No Prep and spent three years traveling with an Outlaw Small Tire car on methanol, so we could learn that side of it.”

And the shop learned fast. In fact, in addition to building engines, Thompson Motorsports does all its machine work in-house as well.

“We do everything in-house,” Thompson says. “We’ve got two CNCs – a Centroid 5-axis for doing heads and a 4-axis T&S for doing blocks. We’ve got everything you can imagine. We are capable of line honing and boring, doing valve jobs, seat and guide work, digital balancing, and more. We try to stay ahead of the curve as far as the technology goes with the equipment that we’re using. It’s really allowed us to evolve into some really high end, top-of-the-line, state-of-the-art stuff.”

Within its 10,000 sq.-ft., the shop also has a 2,500 hp Land & Sea engine dyno, which is a dual rotor, billet break dyno, fully automated, so the shop can run anything from standard dyno tests to simulated road race courses.

While Thompson Motorsports has the capabilities to work on engines for any application such as Ultra4, cigarette boats, buggies and Pro Drift, the Texas-based shop is focused primarily on drag racing applications such as No Prep and Radial. From its humble beginnings as a hobby shop to now a full-fledged engine shop, Thompson Motorsports can churn out 550 engines a year!

“We peaked two years ago at about 700 engines a year, and we were just building too many out of the facility,” Thompson says. “We knocked our lower-level builds out and started focusing more on the higher-level build so that we could put more time and more attention into them.”

One such “higher-level” build the shop recently completed was a 440 cid LSX engine for LSXperts in Ball Ground, GA. The engine runs on methanol and will be used for Radial drag racing.

On the short block, the shop actually started with a Callies Ultra billet crank, but ended up switching to a Dart center counterweighted crank.

“When we switched to that crank, it actually wouldn’t fit in the LSX block,” he says. “We wrote a program on our CNC and went through and clearanced it to use that crankshaft so we could get it to fit in without crashing anything. The heads are Brodix BR7s. We did have them hipped through Brodix to help with some strength there. It’s still all water jacketed, but there’s no water in it. The heads and block are water jacketed, but we run it dry.”

“We did a 2.250˝ on the intake and a 1.580˝ on the exhaust – nice long valves so we’re able to get a little bit of lift and really shim it up and put some pressure to it so we can turn it,” he says. “We set up the engine on an Aviaid dry sump. We plugged the main galley on it, ran it through the back, and then we used a Cam Motion custom ground camshaft. We worked with them to put together a grind that we thought would work really well and it actually worked phenomenal for this.”

The camshaft selection pairs well with the single Precision turbo the shop chose, which will get the Corvette down the track quickly. And, Thompson Motorsports stuck with a standard MLS head gasket, despite the high horsepower.

“There’s been some controversy over making this kind of power and whether or not you need to go in and do the top fuel hoops,” he says. “We stuck with an MLS gasket and the idea behind this was one that even though it was set up to make big power and do what we’re doing with it, we can put water on it and still drive this motor.”

The engine was completed with a FuelTech operating system and a Frankenstein Engine Dynamics billet intake manifold. With a 10:1 compression ratio in this methanol-fueled 440 cid LSX, the engine churned out 1,980 horsepower at a little under 30 lbs. of boost on the shop’s hub dyno.

However, Thompson admits there’s plenty of horsepower still on the table since the shop didn’t really lean on the engine on the dyno. With about 20 passes on this particular setup, the Corvette has gone 4.52 at 161 mph on 23 lbs. of boost in the 1/8th mile.