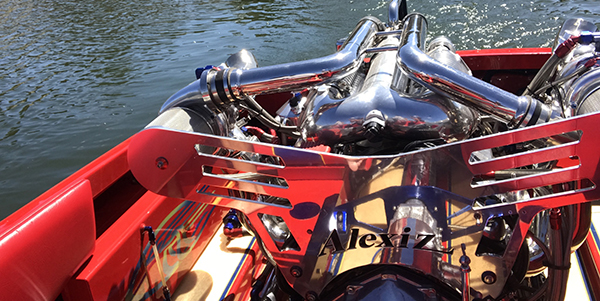 Boat engines are just different. Just ask Alexi Sahagian, owner of Boost Power USA. He builds 700-1,500 horsepower marine engines all day, every day, and making them live in a marine application is job No. 1. Alexi took the marine engine one step further with his build of a 650 cid compound engine, which features two turbochargers and two superchargers. Find out what went into this wild build, and what kind of power it produces!

Lucky for pleasure boat and offshore boat owners who frequent Sahagian’s engine shop, Boost Power USA in Newbury Park, CA, Alexi has more than figured out how to make marine engines live. His engines live very well and perform to the max. Alexi Sahagian grew up around race boats and used to help his dad work on race boats designed to pull speed skiers.

“Tommy Nelson and I grew up together in high school and we would go street racing every Wednesday and Thursday night,” he says. “Basically, he went automotive and I went marine. We grew up in Thousand Oaks, CA. I went to college at night in Santa Barbara and started my company, but I wanted to get a college degree as well, so I was doing both.”

Alexi started Boost Power USA in 1986, but due to being in school, he really kick-started the business in 1990.

“Most of our stuff is offshore pleasure boats,” he says. “In the early ‘90s we used to cater to the racers, but they changed the rules and the classes so much that we stepped away from it and decided there’s way more numbers and volume of dollars in the retail market. We produce engines from 700 to 1,500 horsepower on a daily basis here for offshore boats and pleasure boats.

“We do engines, but we also build injector kits, supercharger systems, we do all the solid works design of all our pulleys, parts and pieces in-house. We specialize in the pleasure boat from 22 to 44 feet in all different ways. We also do complete rigging work.”

Boost Power USA has 12 employees – including Alexi’s wife, mom and sister – and is about 30,000 square feet with the capability to do everything in-house. The shop has three dynos, all kinds of test equipment for injectors and flow benches, and the shop’s original facility located down the street houses the machine shop with one dedicated employee.

“All he does is the dirty work – boring, honing, decking and balancing,” Sahagian says. “Everything then gets transferred into here and we assemble here.”

While much of the pleasure boat market utilizes big block Chevy power, Alexi built himself a marine engine that’s a bit different than the rest.

“Usually it’s some custom aftermarket billet block, Chevy firing order or LS firing order, 540 or bigger cubic inch and usually fuel injected and supercharged,” he says. “That’s the most common thing. When I was a young kid, my shop was at my dad’s trucking yard, and the old Detroit diesels were compounded – they had a supercharger and a single turbo. I built a clay mold of what I thought a cool engine would be with a big supercharger and two turbos feeding it. I didn’t really know if it would work, but I figured it would because the military was using them in plane radial engines. That was when I was 13-14 years old, and I still have the clay model. Then I evolved it.”

In 2010, Alexi built the first one. Today, there’s five of these compound marine engines, and they churn out anywhere from 2,500 to 4,500 horsepower!

“The technology in them is pretty neat because you can have multiple power curves in them on the fly because of all the electronic wastegates and tunability that the ECUs have,” Sahagian says. “You can also run multiple fuels.

“People always ask me, ‘Do you need to do all that to make that power?’ The answer is no, we can do it with two turbos, but when you drive a specific boat, like a small 21-foot V-drive with a compound set up in it, the acceleration is so abrupt it’s worth every penny. Of course, you don’t need all of that, but the dynamics of how you move the air is a critical thing to drivability.”

Alexi’s personal boat is a 21-foot Schiada V-drive design that weighs what a 25-ft. boat would weigh, so it can handle the power output of the compound engine.

“It was designed as a hot rod-type boat to go buzz around,” he says. “The boat manufacturer and I decided this engine would be a good choice and safe to run in a boat like this. Usually, we run it in the 1,200 ft.-lbs. setting, because it’s plenty fast like that. It’s got 240+ hours on it now. I don’t know how many guys can make that kind of power for that long.

“On the original one, we do a lot of taking apart, looking at it and putting it back together. We haven’t taken mine apart yet and neither have we taken apart the other three or four out there. We’re learning as we go.”

Alexi’s compound marine engine starts with a 650 cid, all-billet aluminum block. Boost Power does all the solid works design in-house and the engine has CNC-ported Brodix BB4 aluminum heads. The basic set up remains a conventional big block Chevy-type engine, but that’s where the similarities stop.

The engine has two 90mm Turbonetics turbos on it feeding two 112H Magnuson superchargers that are modified on Boost Power’s own casting and intercooler set up with port injection.

“It’ll make 41 lbs. of boost, but the engine is only 6:1 compression, so it’s really low and really quiet at idle too,” Sahagian says. “We CNC designed the block, but it wasn’t built here. When we received the block, we machined all the pads on the front for all the V accessories, dry sump systems, drop brackets, reverse alternator brackets, cam trigger, crank trigger, etc. The valve covers were machined here. The intake manifold and intercooler Y manifold are casted parts that house two superchargers for our production 900 horsepower engine. We used that as the intake and then we designed a wraparound merge plenum that has all the wastegates, blow off valves and bleeders in it for the system that are controlled electronically via the ECU, which is an AEM Infinity.

“Internally, we have our own crankshafts made in Germany. They’re EN30B billet. Same with the connecting rods. The pistons were made by CP for us. The exhaust valves are all Inconel and severe-duty stainless steel for the intake. We used Clevite coated H-series bearings. The engine has a Jesel belt drive, rockers and lifters. CHE made the lifter sleeves. It’s got custom-made bracketry to hold all the triggers to it. It has a dry sump pan and a Barnes dry sump 4-stage pump.”

Boost Power also has a company under its roof called B2 Superchargers, which provides the superchargers to Boost Power’s main business.

“We buy the rotors from Magnuson, which are Eaton 112H rotors, and then we make all the castings and the snouts for that set up for our regular production 900 engine,” he says. “That’s the rotor group that we have in this engine too. We also have modified seals and oiling systems because we’re pressurizing the supercharger, so we’ve had to make some mods there.

“This engine runs on alcohol, e85, 100 octane, 89 octane, 87 octane –  it’s got about 12 settings in it – those are the most common ones. It’s kind of like a diesel tuner – you can choose how you want to run it. I usually use 100 octane because it’s easy to get, it’s good around the water and it still makes plenty of power. It’s our moderate setting, but it still pushes that boat pretty good.”

As the 650 cid compound marine engine sits today, it has cranked out 2,448 hp, but Sahagian says that’s conservative for this engine. In its moderate, 60% range it pumps out 1,500 ft.-lbs. of torque, but could provide as much as 2,200 ft.-lbs of torque. These power numbers translate into Alexi’s 21-ft. Schiada V-drive race boat hitting top speeds in excess of 150 mph!

Advertisement
In this article:Elring, Engine of the Week, Marine Engines, PennGrade Motor Oil