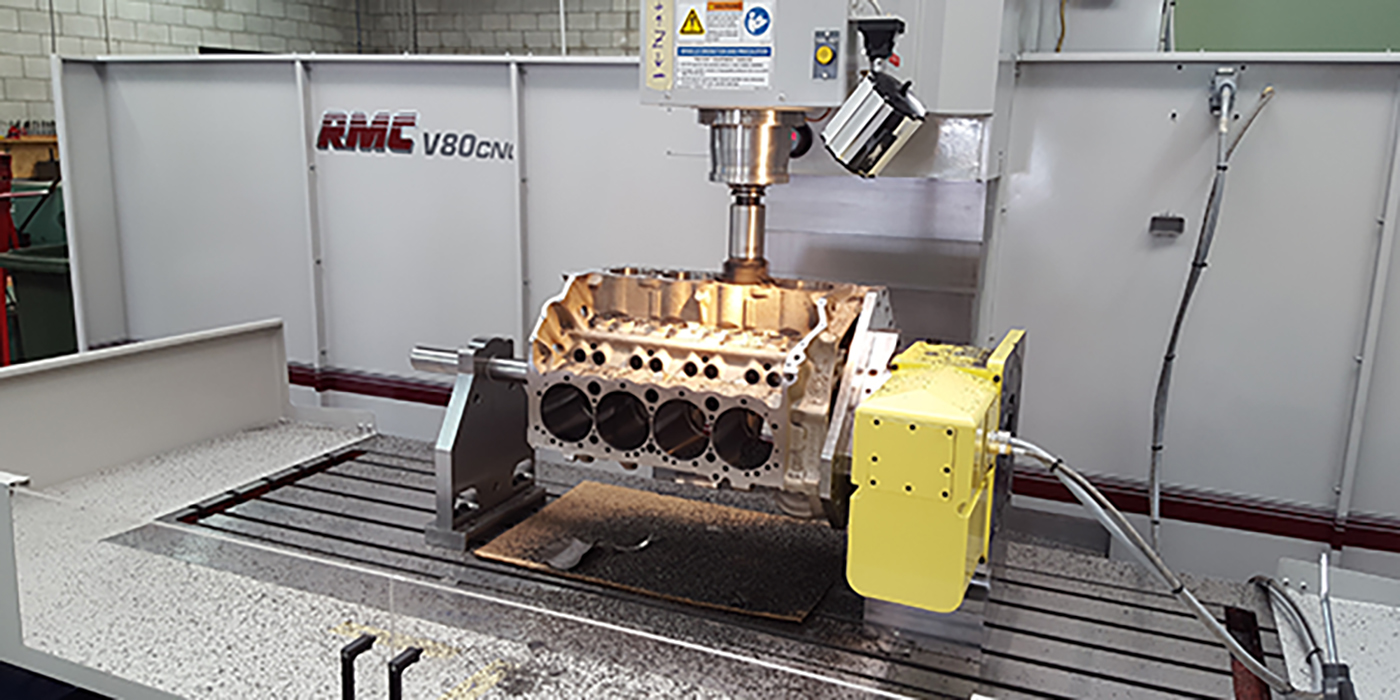 Engine builders have as many preferences for the way they machine and build their engines as a baker does for making dough.

Boring and honing have been one of the backbones in the engine building industry since the beginning of rebuilding. While many of the processes are the same as they were decades ago, there have been many advancements along the way, driven by the necessity for tighter tolerances.

Boring and honing machines are “connected at the hip” when it comes to quality machining, according to David Bianchi of Rottler Manufacturing in Seattle. “High-speed boring machines with the latest insert technologies leave a cleaner finish, free of pulled out material and ready for honing – setting the stage for a quality finish after honing.”

Cylinder boring is a critical job because it brings the engine block back to life with straight and round holes. A true concentric bore minimizes ring flex as the piston moves up and down and is squarely aligned to the center of the bore and crankshaft. The bore must also be dimensionally accurate to fit a piston with the proper side clearances.

How much material should you remove? In boring operations, it is dependent on what oversize you want to go, but typically, engine builders take anywhere from .020˝ to .100˝ in boring operations. “We always suggest leaving a minimum of .003˝ on the diameter to hone,” notes Rottler’s Ed Kiebler. “This ensures you get to base metal after boring operation.”

Engine builders have as many preferences for the way they machine and build their engines as a baker does for making the dough. However, the best recipes for surface finish come down to the peaks and valleys and how you balance the need for oil retention versus friction. “With today’s fuels, cylinder pressures and temps, moly rings will no longer foot the bill,” Kiebler reveals. “We see more tool-steel rings in performance applications. Ring manufactures say they no longer look at the surface finish in regards to ring composition as much as they look at cylinder wall finish for specific applications. Typically ring manufacturers are asking for higher RvK (valley depth average) numbers when it comes to power adders like nitrous, blown or turbocharged engines.”

Most performance engine builders and even many production engine builders use torque plates when they are honing blocks to ensure the best finish. Proper bore geometry improves ring sealing to maximize power while minimizing blowby, compression losses, emissions and oil consumption.

Other than uneven clamp loads from the head bolts, Kiebler says one of the leading causes of bore distortion is the pressure put on the cylinder wall during either boring or honing. “Using a positive rake smaller radius boring insert to reduce cutting pressure during the boring process can reduce stresses.

“On a honing machine, it is critical to maintaining even pressure on the cylinder wall. Newer honing machines can set honing pressure as a percentage of the load. Depending on the type of block or manufacturer of the block, some blocks can withstand more pressure and still have round cylinders. Other blocks have variations in cylinder wall thickness and need less honing pressure to maintain round cylinders. Another way to fight bore distortion during the honing process is to use a honing head with more stones. So in a thin wall cylinder that wants to distort, a six stone hone head will work better than a four stone.”

How much bore distortion is too much? Kiebler says it depends on the application, but for many late model gasoline engines with relatively tight piston-to-cylinder wall clearances, “being as little as .0005˝ out-of-round could be too much.” But on an older Chevy small block budget motor, higher tension rings and greater piston clearances, “you might get by with as much as .005˝ of bore distortion.”

One- and two-person shops do not have the same needs as a production engine remanufacturer (PER) with 100 employees. Smaller shops often can’t justify the purchase of a top-of-the-line boring or honing machine with all the latest “bells and whistles.”

Matt Napolitano of RMC Engine Rebuilding Equipment in Saginaw, MI, says smaller shops are at a crossroads and are sitting on the fence about buying newer CNC equipment. “Unfortunately, part of what goes into the equation of whether or not a new CNC is affordable is your location.”

He says older, smaller shops in lightly populated areas are going to have a hard time justifying the expense of new equipment if they don’t have the volume of work to make it worthwhile. “At the end of the day, with a multi-purpose CNC that can do many operations, including cylinder and line boring, you’re gonna end up with a pretty good size payment.”

According to Kiebler, the single biggest challenge today is finding good people who will work. “It is tough to find people who will show up, want to learn and will stick with it. I tell shop owners: you can spend more on a machine that will do the work for you, always show up, never get sick and never ask for a raise. Or you can buy something that might be less expensive on the initial purchase and then try to find someone to run it so you can process enough work to pay for it.”

Today’s machines allow a small shop to double their output with the same amount of people. “There is no reason you can’t be honing, boring and doing something else – like cutting valve seats or balancing while a CNC block machining center is boring all eight cylinders and relieving those cylinders for honing automatically,” Kiebler notes. “And the hone is moving down the bank of cylinders while you are doing something else.”

While a multi-purpose CNC may be a significant expense upfront, if you add it all up, it’s about the same or less than buying four separate manual machines. “If I go buy a surfacer and an align boring machine, a Bridgeport mill and a boring machine also, there are four machines right there. You add all those up, you’re going to spend more than a CNC and still have limited capabilities,” says Napolitano.

A lot of guys in the industry are getting older, according to Napolitano, some in their 60s and even older. “Some of these guys bought their equipment 20 or more years ago. It’s all paid for now and it still works, so they balk at the price of new equipment.” He says that unless a shop has a plan to pass on the ownership, many of these smaller shops are content to continue doing the same thing until they can’t.

Shops that want to stay in the game and work on new engines may get “chewed up” because a shop nearby will buy a CNC and take most of the business, says Napolitano. It is a big decision for some shops to make such an investment, but it can also bring in more than an owner thought it would because now you’ll have the capability to go far beyond the standard jobs.

“I sold a machine earlier in the year to a guy in Australia, and he had work piled up so the jobs could be done on the CNC. He had guys that could wait for him to get the machine and the training to finish their job on the new CNC. He says he has double the work today.”

While the principals of boring have not changed much over the years, the tooling and equipment have indeed evolved to keep pace with both OEM advancements as well as the demands of racing and new materials.

Kiebler says the needs of a small shop match well with equipment such as their F9A boring bar and H85A cylinder hone. “The F9A has a range with an optional boring bar to go from 1.5˝ to 5.0˝, and our H85A can be upgraded as the business grows to a more automated process.”

Today’s CNC honing machines will go from hole to hole and even roll a V8 block and hone the opposite bank automatically. With the new hones that will run automatically and hone every cylinder to within .0002˝ to size and straight.

Kiebler believes the hone should now be the first piece of equipment purchased. “The honing operation is by far the most important operation to sealing rings and making power. You can have the perfect bore perpendicular to the crankshaft and exactly 90 degrees from the other bank, but if you don’t seal the rings, you’re done.”

Bianchi says with the new advancements in honing, engine builders can go as far out as creating different surface finishes at different locations in the cylinder. “For a performance engine builder, this is a distinct advancement. For example, our latest honing machine can produce a rougher finish on the top of the cylinder and a smoother finish on the bottom for engines using power adders.”

Kiebler and Bianchi also note that older style hones with rack-and-pinion, two-stone, two-wiper-style hone heads can’t generate as round a cylinder as the four and six stone diamond hone heads on the newer machines. Nor can they give you the plateau finishes which many ring manufacturers desire. EB