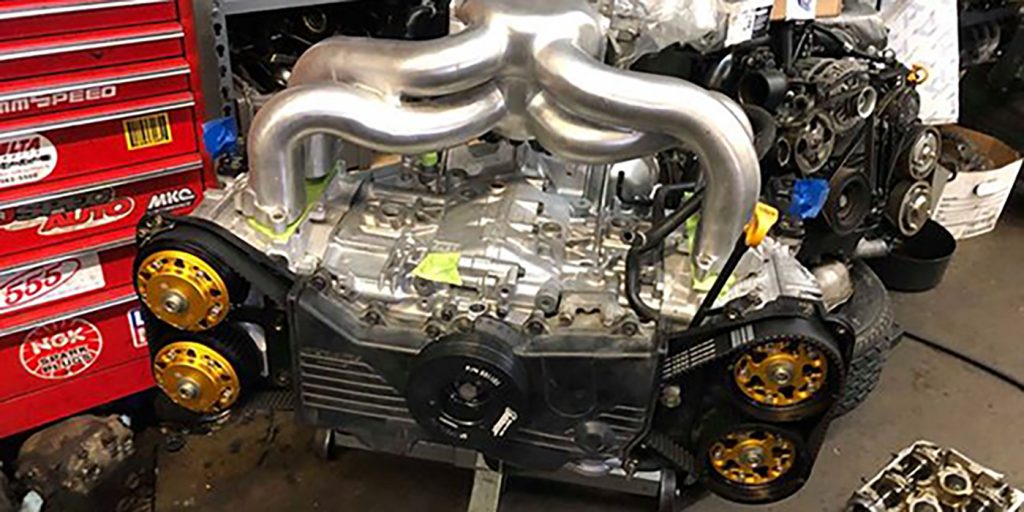 One thing I’ve come to enjoy about the Engine of the Week series is the engagement and feedback we’ve gotten from our readers over the years. I especially love when we get submissions for potential engines to feature. This week, we feature one such submission – a naturally aspirated Subaru EJ engine built by Brandon Loveless.

Brandon reached out to us on our Facebook page and was happy to tell us all about his Subaru build that has been years in the making. Brandon resides in the St. Louis, MO area and has an engine shop background having worked in a couple over the years, as well as adopting a love for cars and engines from working with his dad.

“When I was young, my dad and I were always tinkering on cars,” Loveless says. “That really fueled the inferno and the passion I have today. My dad and I mostly worked on his old C10s. He has a ‘68 C10 that is a very rare configuration – long bed step side with a 454 big block and turbo 400. His other C10 we always work on is a ‘69 short bed fleet side with a 400 small block and turbo 350.”

Brandon’s passion for Subarus didn’t take hold until he moved away for college, where there was a 100 Acre Woods Rally just a few miles away. That led to his first Subaru, a 2002 WRX.

“That car was a lot of fun, but I was actively looking for a 2.5RS coupe for years,” Loveless says. “They’re very hard to find, especially a clean, rust free one as they are rare in the GC chassis.”

It was also in college that Brandon started building and selling STi engines with forged internals to learn on and make a little money.

“It was then that I finally found a ‘99 2.5RS that was pretty rust free, but needed body work and paint,” he says. “I then built my first version of a high output NA Subaru engine. It was very basic compared to my current setup, having just high compression pistons and Delta 2000 cams. That engine was nice and very reliable for autocross events, but I wanted more. I sold that engine after only 3,000 miles to Aaron Kaufman who used it in his rally car on Discovery channel.”

After selling that car, Brandon began the build of this naturally aspirated Subaru EJ engine, which he refers to as digging a gigantic rabbit hole to feed his obsession for perfection.

“It has been three years in the making and hundreds upon hundreds of hours,” Loveless says.

He built this engine for autocross and track day events with the goal of eventually getting into time attack racing.

“I built the engine on my own, but had help with machining from Phase II Machine in St. Louis, MO,” Loveless says. “It was very hard to get very high-performance parts for pursuing a high output NA Subaru engine. Almost everything had to be made custom to reach my goals. In a world of turbo Subarus, I stand alone pushing the limits of NA Subaru EJ engines. I can’t count the number of times I was told to just turbo it. But I desired that instant response and predictability of NA.”

To kick off the naturally aspirated EJ build, Brandon used a set of EJ205 heads (2.0L turbo heads) that got CNC ported and chamber matched to 2.5L by Larry’s Auto Power.

“I am running Ferrea valves with a multiangle race valve job, BC 80-lb. chromoly springs with titanium retainers and Ferrea keepers,” he says. “The camshafts are custom ground Crower cams from blanks with 288 duration and .453 lift, but a tight lobe separation angle and more lift at .050 than other turbo cams. I had to mill a significant amount of material to get the cams to spin without hitting the bucket grooves. I also had to cut down the valve guides so my cams would spin all the way around too.”

The bottom end for the build features an EJ257 semi-closed deck block that has been bored to 99.75mm, square decked and soda blasted. The crank, rods and pistons were all balanced to within a tenth of a gram.

“The crank is a nitrated 257 crank that was balanced by Lens Crankshaft Co.,” he says. “The rods are Carrillo Pro Super A-beam rods. They are ultra-lightweight, but still very strong. The pistons are custom 12.5:1 JE pistons. They have been thermal barrier ceramic coated on top and friction coated on the side skirts. I worked with JE to get a custom design for my desired compression ratio with my chamber mold and cam specs.

“The engine has a Fluidampr crank pulley to dampen any harmonics. The intake manifold is from a later model EJ253 that has been very customized for twin throttle bodies as well as many hours of shaving and polishing it.

“The build also features 1,000cc injectors for e85 and the occasional e98 fuel. My header is a custom 4-2-1 header from Inferno Fab – 1.75˝ primaries, 2.25˝ secondaries and 3˝ final collection. My beautiful intake tubes were done by DKG Fab. It is controlled by a Haltech Elite 1500 and tuned by Shinji Tuned.”

The Subaru EJ engine lives inside a ‘99 Impreza 2.5RS coupe and is mated to a JDM version IV STi 5-speed transmission with 4.44 gears and LSD differential.

“The build hasn’t been easy at all,” Loveless admits. “I made a mistake the first time the engine was in the car. I did not double check the custom pistons that were made for my setup. The valve pockets weren’t in the right place and it turned out the piston maker didn’t use the chamber mold I sent them of my heads, so the pistons were smashing the valves.

“It was hard to find why it was running so bad the first time, even with the valves contacting the pistons, there was only 3% leak down. I went on a limb and pulled off the heads to look in there as I knew something was wrong, but the valves weren’t leaking. With a head off, it was very obvious what was happening. Luckily, I caught it before it did any serious damage. I contacted the piston maker and they found their mistake and remade the pistons for me.

“The engine is going together now with the updated pistons, and once it gets dialed in, it should make upwards of 230 hp to all four wheels revving to 9,000 rpm.”