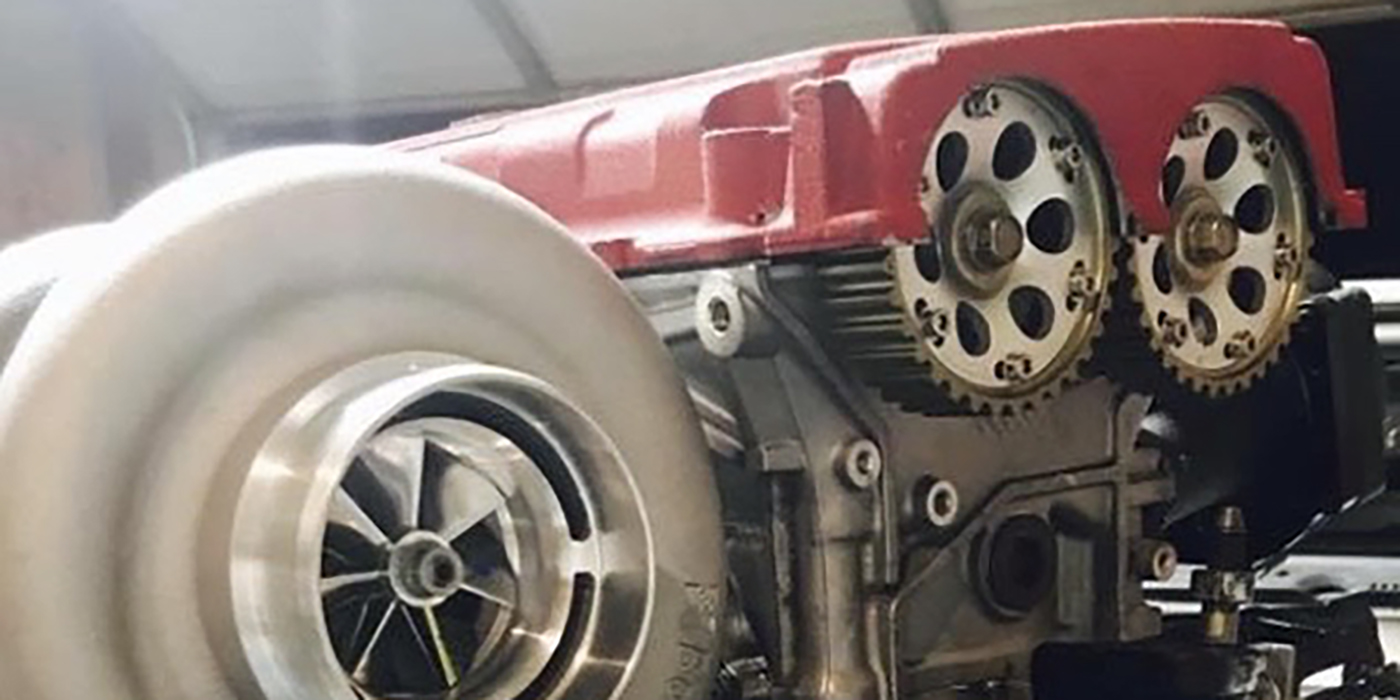 When an attempt at building an all motor Honda engine wasn’t going to perform up to expectations, Daniel Cahalan and the team at 1320 DTR decided to go with a turbo set up for a top drag car application. Find out the results of the Honda B18C engine build!

Growing up, Daniel Cahalan (pronounced Calahan) wasn’t all that into cars and engines, unlike many who enter this industry. It wasn’t until Daniel’s friend, Shelby Henderson, brought him along to go street racing that Daniel’s interest in the industry took a 180.

“I really wasn’t all that into cars until 18 or 19 years old,” Cahalan says. “I decided to go out with [Shelby] street racing and I’ve been hooked ever since.”

Daniel and Shelby’s first foray into the industry was actually in the form of a clothing company selling car-related t-shirts. Unfortunately, Shelby passed away six years ago, and Daniel lost interest in pursuing the t-shirt company without him.

Despite the loss of his good friend, Daniel’s passion for the industry was still strong, so he decided to team up with his brother Hunter to turn the t-shirt company, called 1320 DTR, into an engine shop focused on import engines.

“I decided since the t-shirts didn’t work out for us, let’s try to move into the race side of things,” Cahalan says. “My brother and I are the owners of the company now. We’ve been racing for about 10 years and became licensed in January 2019. It’s been paying off pretty well for us. We try to really focus on just engine building of mostly Hondas, but we have done Mitsubishi and some other stuff and we’re starting to explore the Toyota stuff as well. We’ve stuck with the import scene here in Colorado… and new technology has been a game changer for the imports.”

1320 DTR is located in Thornton, CO. The DTR stands for down to race. The import engine shop has five total employees working out of a 3,000 sq.-ft. space. Daniel’s goal with doing primarily Honda engines is to not spread the shop too thin when it comes to engine work.

“A lot of companies are good at a lot of things, but they’re not really great at any one thing,” he says. “We really wanted to focus strictly on engine building for those particular imports. This year, we gained a lot of support from Ostar Motorsports and PFI Speed. They’ve given us quite a bit of business.”

The shop doesn’t do any in-house machine work, but 1320 DTR will do port work on cylinder heads and all assembly work in-house.

“We try to focus on working with customers on what their goals are – whether it’s a horsepower goal or a goal at the track – and try to fit that in with their budget,” he says. “We’ve had to turn down a few jobs because we won’t cut any corners. We’ll do our best to fit a budget, but if someone is going to slack on some parts that are definitely needed, then we won’t do it.”

One of the engines 1320 DTR recently did was a Honda B18C for a top drag car. This engine was built to show other 1320 DTR customers what could be done with one of these Honda engines without breaking the bank.

“We started off bracket racing and moved up to the heads-up racing side of things using this top drag car,” Cahalan says. “We tried to use off-the-shelf parts to show customers that you don’t need to have all this money dumped into it to go fast and have fun. We can knock off 8-second passes here on the mountain.”

“The first go around on this engine build, I changed my mind and sold everything,” Cahalan says. “I was going to go all motor with it, but after watching some of the other guys here at this elevation using four cylinders, it just wasn’t going to reach the goals I was hoping to reach with the car. The density altitude (DA) here in Colorado at the race track on a good day would be 7,000 feet elevation, and all motor for a four cylinder is just not going to cut it. I ended up selling the all motor stuff and going back to the turbo set up.”

The Honda B18C engine build went together with a compression ratio set at 11.2:1 and is installed in a 1990 Honda CRX, which is now capable of 8-second 1/4-mile times!

“We’re going to put this engine/car in the PSCA Pro Class locally, and then we’ll try to get into some IFO (Import Face-Off) races in Vegas and Arizona as well,” Cahalan says.

With great work like this Honda B18C engine, things at 1320 DTR are going well. It also doesn’t hurt that the shop has it’s good friend Shelby looking down on them. He’s remembered in the shop’s logo, represented by the wing, which is an angel in the sky.