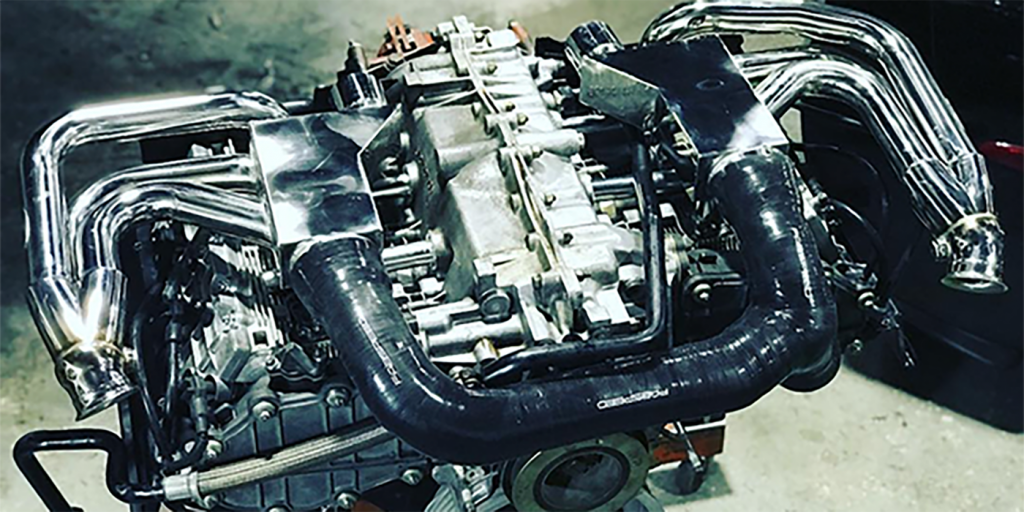 If you’re a serious Porsche fanatic with a lot of money, there are a couple of builders who immediately spark your interest – Singer Vehicle Design, Gunther Werks and Workshop 5001 are some of the most obvious. However, if you’re Joshua Wekstein, spending $500,000-$750,000 isn’t really in the cards. That’s not to say Josh would be denied a really nice Porsche!

In 1992, Porsche produced a super-lightweight, rear-wheel-drive only version of the 964 dubbed the Carrera RS for the European market. It was based on Porsche’s 911 “Carrera Cup” race car and harked back to the 2.7 and 3.0 RS and RSR models.

In order to please devoted American 911 enthusiasts who wanted an RS model, Porsche produced the RS America as a model year 1993 and 1994 car based on the US Carrera 2. The RS America featured a distinctive “whale tail” spoiler and RS America and RS logos. Deleted to save weight were power steering, cruise control, powered side mirrors, air-conditioning, sunroof and radio, although the air-conditioning, sunroof and radio as well as a limited slip differential could be ordered as options.

The RS America was listed by Porsche as weighing 2,954 lbs. – 77 lbs. lighter than the weight listed for a stock Carrera 2.

In 2013, Josh Wekstein and a friend/business partner, started a hedge fund together, buying classic cars as investments. The Porsche RS America was one of those cars.

“It’s a 1993 RS America and a 964 3.6L engine,” Wekstein says. “We bought a handful of cars to demonstrate proof of principle and that we knew what to buy. We wound up buying about 13 cars or so. However, the hedge fund never went anywhere, so we wound up splitting up the cars. My buddy took pretty much all the cars except I took the RS.

We bought the car in 2013. We kept it in storage for a couple of years because we weren’t driving the cars in our portfolio, as you might imagine. When we decided this wasn’t working, we split them up in 2016.”

Now that Josh had his dream Porsche, he wanted to drive it and knew he needed to improve the car. With its age, he also knew there may be some issues in the engine, and that’s where his Porsche build began.

“I took the RS back in ‘16 and drove it for a little bit,” Wekstein says. “That’s when I began to open up the car. When I was dropping the transmission to put in a lightweight flywheel, I had an opportunity to look through the engine because I was worried about the valve guides. On 911s the valve guides wear and it can be a problem.

“I called my mechanic, which is Lynmor Motorsports in Long Island, NY. I knew the valve guides probably should be replaced, but they found that the cylinder heads were in bad shape too. That opened up a slippery slope. The condition of the cylinder heads is what triggered the rebuild.

“My buddy had a Singer built and I was intrigued by what they did. I couldn’t afford a $750,000 car, however, but I had the 964, which was basically the body they were building off of. Through various online places, I ended up getting connected with essentially all the subcontractors that Singer uses. I got in touch with Jae Lee over at Mirage international in San Diego, CA, and I sent the heads off to Xtreme Cylinder Heads in Palm City, FL.”

The original RS America Porsche engine is a 220 cid 6-cylinder with a bore and stroke of 3.94˝ x 3.01˝ and a compression ratio of 11.3:1. It is electronically fuel injected, has an aluminum block and heads with a forged crankshaft and an overhead cam. Stock, the engine produced 260 hp and 230 lb.-ft. of torque.

“It’s all still numbers matching,” he says. “The heads are original. The camshaft is not, but it’s a bespoke camshaft. The engine case, the heads – all that stuff is original. The suspension has been refreshed. It’s running on Ohlin’s TTX dual adjustable dampers, which is the same as the Singer. It is running on Jenvey Dynamics ITBs (Individual Throttle Bodies). It has custom Carrillo rods put together by Jae, which are lighter. It’s got beefed up springs and valves, so the engine can spin to 7,800 rpm without a problem. It’s got a camshaft by Dema Elgin. It’s got Fabspeed RSR dual outlet headers and exhaust system. It’s got an FVD short shift kit with golden rod. It’s got Recaro lightweight bucket seats with CarBone cushions. It’s got carbon kevlar bumpers and the car rides on BBS E88 wheels.

“The car weighs around 2,575 lbs. wet. It was tuned by Peter Dawes at Dawes Motorsports in Pennsylvania. It produces 364 horsepower at the crank – 300-310 hp at the wheels. The car is probably just a drop under 7 lbs. per horsepower and makes tremendous sounds. It’s a pretty unique car. It’s been pretty well thought out. Jae was the chief engine architect.”

The build was almost two years, soup to nuts, by virtue of the fact that Josh had to rely on extremely specialized Porsche builders for each aspect of the vehicle.

“When you get to really good guys, there’s like one guy, and you have to wait until he’s ready to work on your car,” Wekstein says. “It was a sequential process because Jae couldn’t spec the cam until he had the heads and so on. The whole project was a handful of guys who are just one guy – be it Jae, Xtreme or Dema Elgin – so it took a couple of years to get straight.”

With all that work finally done on the RS America, Josh makes sure he “drives the shit out of the car.”

“It’s not a garage queen,” he says. “I take it out in New York and I’ve got a place in Southern Vermont and in Southern Vermont there’s a private toll road, which climbs 3,500 feet in four miles and has 40 hairpin turns. For $15 it’s you, the road and the trees are what keep you in line. You don’t have to worry about losing your license. You don’t have to worry about killing anybody – other than yourself. It’s about as good a $15 as you could ever spend.”

We would have to agree that Josh’s entire build was money well spent!