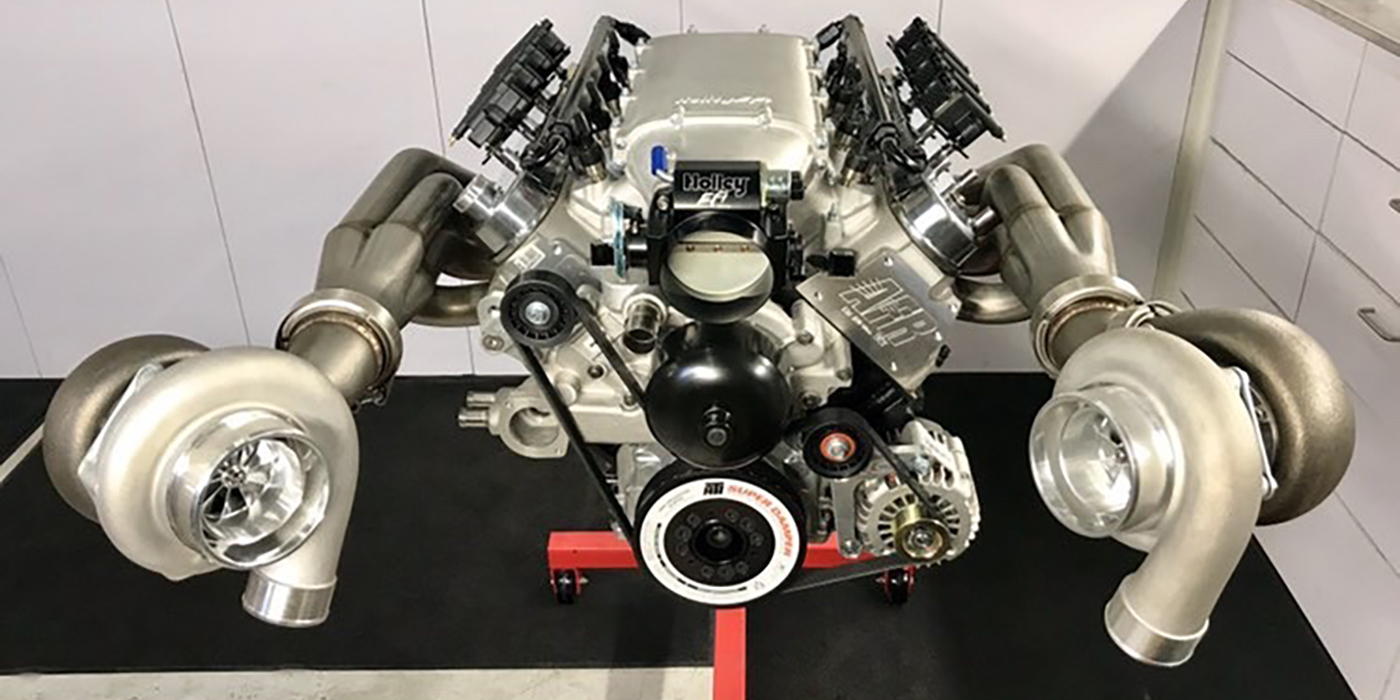 Stef Rossi grew up in the UK around Volkswagen engines. He quickly got into the engine building industry with air-cooled engine work, but a passion for V8 American-made muscle drew him to LS engines. He opened a shop in California last year and has been cranking out LS builds like this twin turbo 370 cid LS that recently went out the door to a happy customer.

Stefan Rossi, who goes by Stef, is the owner of ACE Performance Engines in Torrance, CA. He opened the shop last April after years and years of dreaming of building engines here in the States.

Stefan is originally from the UK – the Birmingham, England area two hours north of London – where he grew up with a father who loved Volkswagens. The passion rubbed off on Stef as well and he immediately got into the industry.

“My dad was into Volkswagens and all his friends had big engines in their Volkswagens and I was always interested in them,” Rossi says. “My dad had a 675 in the garage, which he let me have. I took out the engine and rebuilt the engine. I bored it out and it just spiraled out of control from there. It just got bigger and faster.”

Stefan took his early engine talents to a few shops in the UK before he joined the army at 18 years old.

“I did four and a half years in the army,” Rossi says. “Every time I came back on leave, I used to go to one of the shops I used to work at. I’d get three weeks leave and I’d get bored, so I’d go work.

“Once I left the army, I lived in Canada for a year. I thought it was going to be my stepping stone to move to California. However, it’s just as hard to move from Canada to California as it is to go from England to America.”

After his short stint in Canada where he worked on semi-truck engines, Stefan returned to England in 2010 and opened his own engine shop, Air-Cooled Engineering.

“We just did air-cooled VW and Porsche primarily,” he says. “That was 10 years ago. About six years ago, I got into rebuilding American small blocks and big blocks. I found LS engines about four years ago after a friend told me I should do work on those.”

Stefan’s air-cooled obsession began morphing into a V8/LS engine obsession, and the desire to move to America grew as well.

“We moved to California in April 2019,” he says. “The aim was to come over here and get more and more into the LS engines. In England, I was getting to be the known go-to guy for LS engines, but over here, not many know me… yet. I’m still very busy with Volkswagen engines too, but we want to focus more on the LS stuff.

“We started the shop in California in 2019. I brought all my machines, my toolboxes, everything. We got an engine room and started from scratch. The shop in the UK was called Air-Cooled Engineering. I didn’t want to keep the same name, even though the name here is very well-known in the VW and Porsche scene. A lot of people knew me already. I had a good following from the guys over here and that scene, but I didn’t want to keep that name because I can’t be building LS engines with the name Air-Cooled. I decided to just use the acronym ACE Performance Engines.”

ACE Performance Engines is capable of doing some machine work in-house, but a majority of the bigger machining jobs get sent out to local machine shops in Torrance.

“The shop’s not that big at the moment,” he says. “We’ve had to downsize quite a bit, but the plan is to be self-sufficient.”

It didn’t take Stefan long to get right into building the LS engines he’s been dreaming about building. In fact, he recently finished up a sweet-looking twin turbo 370 cid LS, which funny enough, is getting shipped to England.

The customer of the 370 LS only wanted 800 horsepower out of the build, but Rossi was able to get him to upgrade the build for more power.

“I told him to build an LS with only 800 horsepower and doing all the machine work we’re already doing and the ARP hardware, you might as well use nice rods, pistons and some good heads with the 7.50˝ deck,” he says. “Then he’s probably going to be good for 1,200-1,300 horsepower. It gives him room to improve the turbos in the future if he wants to go chasing numbers more.”

The LS build also features ACL Race bearings, a COMP Cams timing set and a Brian Tooley Racing turbo camshaft. All the machining was done by Manny at Shaver Specialty in Torrance. To finish the engine, Rossi planned to use PennGrade oil to keep the engine running well.

“I was going to speak to PennGrade for the oil in this one,” he says. “I’ve used PennGrade before and been happy with it.”

For now, this twin turbo 370 cid LS engine makes low to mid-900 horsepower, with plenty of room for more if desired.