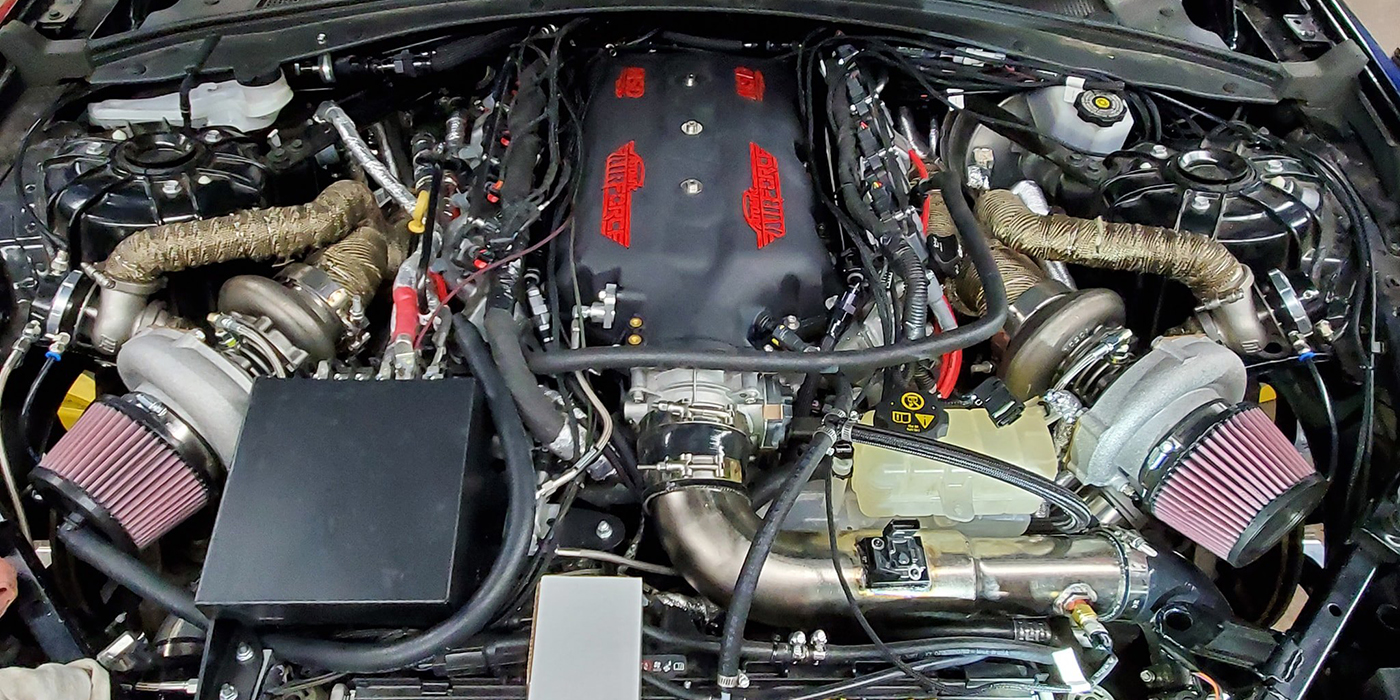 In its 50-year history, Pro Car Associates has done it all when it comes to automotive work and engine work. Now in the capable hands of Chris Wright, Pro Car continues its quality work on builds like this 416 cid twin-turbo LT1 engine for a 2016 Camaro SS. Find out how much horsepower this beast cranks out!

Celebrating 50 years in business last year, Pro Car Associates is one of those truly special shops located in Akron, OH. Founded by Chuck Wright and Jim Cavallero in 1969, and today run by Chuck’s son Chris Wright, Pro Car Associates has the know-how and the capabilities to do it all. The shop is even located in a building that when it was built, was the second-largest, single-span building in the city of Akron.

“It was built with bridge trusses from Delaware and it was a Mack truck dealership,” Chris Wright says. “It’s a neat, old-school building with brick and real high ceilings. My dad bought this building in ‘76.”

“We’ve got 10 bays for working on vehicles,” Wright says. “We’ve got a full fabrication area, a machining center that houses everything for cylinder heads, which we do in-house, and our other miscellaneous machines, mills, lathes, grinders, etc. We’ll make anything from exhaust systems to frames and custom stuff for car builds.

“We’ve got layout areas where we have cars that are sitting in bays that we’re working on or doing other things to. We’ve got an engine tear down area. We’ve got a complete wash bay for cleaning parts and everything. I’ve got a glass beader, a slurry blaster, an ultrasonic tank, hot tanks, and chemical tanks. Anything we need to clean or do in-house, we do it all here.

“We also have an engine dyno facility in the back, which is explosion proof. We also have our engine room back there, which is airconditioned and is a clean environment. We also have a flow bench testing room, all of our office space and a parts room up front. We’ve got plenty of room to do what we need to do. We have a lot of vertical space too, so we’ve got a lot of racking and things of that nature.”

What’s really benefited Pro Car so much over the years, has been Chuck Wright’s ability to do so many things. According to Chris, he was a certified welder and an engine developer, and he built some of the fastest race cars in the country in the ‘70s.

“In one year, he built cars that set 11 different national records,” he says. “He was a rare breed. Pro Car was a place that anybody could come to get anything done and it was at the best level you could ask for.”

While Chris gives his dad deserving credit for building the shop into what it is, Chris himself is a chip off the old block. He grew up in the business seeing his dad build some incredible engines and cars.

“My dad totally got me into engine building,” Wright says. “My dad did over 50 years of engine development with the auto industry at all levels. Growing up with him, having done all that, I grew up in it. My first job was when I was 13 working at a race car chassis shop.”

Despite his interest in working for his dad and following his lead, Chris also wanted a career of his own, so he became an engineer in the industry.

“I spent 13 years in motion control and automation robotics as an electrical engineer,” he says. “During that time, I raced all over the country. I would do 15 to 20 races a year. What was really interesting to me was the crossover between automotive and being able to do automation and motion control, because everything today has so much data and is automation driven. The vehicle is nothing but a machine. The engine is nothing but a mechanical device. In motion control and robotics, you have to understand both the mechanical aspects of everything and the electrical aspects of everything, so it really crossed over into engine building quite easily. Having spent so much time with somebody like my dad who was very gifted and talented at what he did, I was able to learn so much and cross the two sides together. Everything I did in automation and motion control, I’ve applied in some way to the automobile and to the engine.”

As part of his engineering job, Chris moved back to Akron in 2011 and was able to work from home out of the Pro Car shop. This would ultimately rekindle his love for engine work.

“I still had my full-time job, but I was spending my evenings here in the shop,” he says. “I was literally working two jobs. I was working crazy hours and I did that up until 2014. In April 2014, I made the switch to full-time at Pro Car Associates. I was fortunate I got to work side by side with my dad every day from 2011 until he passed away at the end of 2018.”

Today, Pro Car does general repair work, full car builds, performance work, engine work, transmission work, EFI tuning and customization, and complete drivetrain work. What Pro Car doesn’t do is body and paint work, interior work and cage work, which it partners with a few other shops for. Pro Car also sends out balancing and block work on the engine side, but the rest is done in-house.

“At one time, we had about $2 million worth of machine equipment here,” Wright says. “All the cylinder head work and fabrication is done in-house. We do all the port matching and things of that nature. We weld stuff. My goal is to get back to where we were machining in-house, because I want to do some additional things and control quality better.”

When it comes to the shop’s engine work, Pro Car’s focus is on GM engines since Chuck Wright was a GM engineer back in the day.

“We build all your big block, small block platforms and LS/LT platforms,” he says. “We work on other V8 and V6 engines. We can build your basic street engine to your really high-end, high-performance drag engine. Then, we get into the custom drag engines. We also build Ford and Chrysler engines. We’ve actually held national records with all three manufacturers throughout our history.”

With five full-time employees, Pro Car certainly does great, quality work, and one example is a recent 2016 Camaro SS with an LT1 engine under the hood. The customer came to Pro Car two years ago to get the engine supercharged.

“We actually had supercharged and custom tuned this engine two years ago and it was making around 600 horsepower at the wheels,” Wright says. “It wasn’t a ton of work as far as customization or anything, it was more just bolt-on stuff. That customer wanted to continue adding horsepower and take the engine into the next phase.

“We were going to supercharge it to a more extreme level and build up the engine a lot, but he wanted to go with twin turbos. He brought us a twin turbo kit, which we ended up modifying. Phase one was supercharging this thing a couple of years ago, which made good power. Now, phase two, which we started this past winter, is adding the twin turbos and building a killer engine. My goal was to make 1,200 horse. That’s what I wanted to see.”

To do that, Chris admits he’s pushing the limits on the LT1’s stock block, but inside, the engine got a bunch of new goodies to handle the horsepower.

“The block is kind of the weak link at the moment,” he says. “Inside, we’re using a Lunati crank, Carrillo rods, Diamond hardcoat pistons, and our MVT/LT1 cylinder heads, which flow over 400 cfm. Then, we added an aggressive Cam Motion camshaft to our design and finished out the whole valvetrain with Ferrea 6000 series valves, PAC springs and titanium retainers. We did our own custom porting on the cylinder heads. The intake manifold is an Atomic EFI intake for the port injection set up.

Pro Car set up the controls and when the Holley starts kicking in and when those fuel pumps kick on is all automatic.

“We basically looked at the wastegate spring setting and we tuned the factory system,” he says. “We had done 12 lbs. of boost on the old supercharger set up with the OEM system we had in it, so we knew we were good with the factory OEM to 12 lbs. Well, the wastegate springs are like seven or eight, so we tuned the factory OEM system all the way up to 7 or 8 lbs. of boost. Then, once we had that good and dialed in, we switched over to the Holley system. The Holley controls all the ignition and all the secondary fuel, which is port injection.

According to Chris, with this system, the engine can be tracked tuned very easily because they can do all of the ignition control, launch control and CO2 boost control on the spot. Now this 416 cid twin-turbo LT1 is ready to go!

“Right now, we have it set up for 21 lbs. of boost and it made that comfortably,” he says. “We’re making close to 1,100 horsepower at the flywheel, because we’re putting out 951 horsepower and 890 lb.-ft. of torque at the wheels.”