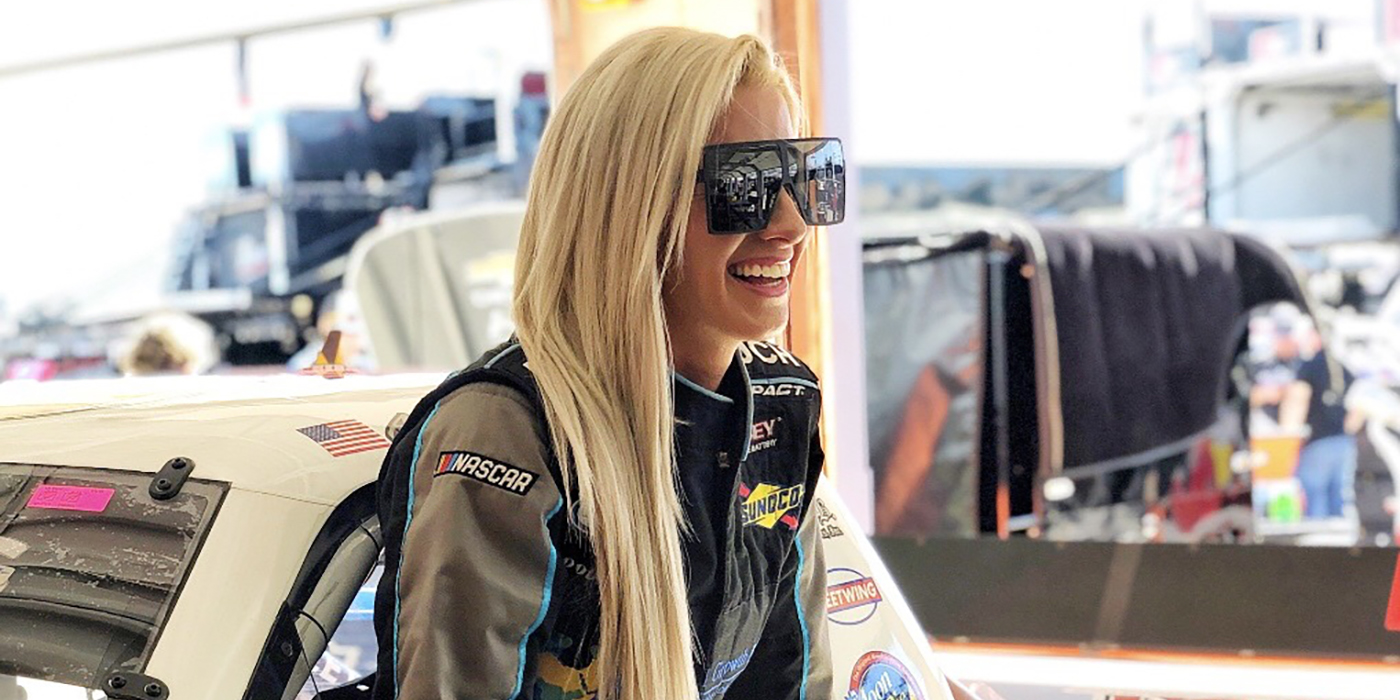 “There are only three female drivers in NASCAR right now and to know that I’m one of them is pretty amazing.”
– Angela Ruch

Angela Ruch is a top female driver in the NASCAR Gander RV & Outdoors Truck Series. She’s the niece of former Daytona 500 Champion, Derrike Cope, and the only woman in NASCAR who is a mother. She made history in 2019 by becoming the first female in the NASCAR Truck series to lead laps at Daytona International Speedway, and she has added a new title to this list – star of her own reality docuseries, The Ruch Life, which can be seen on Facebook.

“There are only three female drivers in NASCAR right now and to know that I’m one of them is pretty amazing,” Angela Ruch says. “Racing has been in my family for three generations. My grandfather drag raced, my dad raced and my uncle, Derrike Cope, won the Daytona 500 in 1990, so racing has been in my family. My grandfather also owned Cope Brothers Machine Shop out in Spanaway, WA and it’s currently owned and run by my dad now. I’ve grown up around motors my whole entire life.”

Angela’s first taste of racing came when she got a Go Kart for Christmas at the age of nine. “I didn’t even really know what it was,” Ruch says. “I didn’t know the gas from the brake ­– but that’s when my passion for it started.”

That gift turned into a passion for speed and being the first to cross the finish line. Angela joined a Go Kart series with her twin sister and from then on, there was stopping her.

Of course, having the opportunity to learn how to drive from a Daytona 500 champion uncle helped Angela and her sister see early success.

“Growing up, I would watch my uncle on TV and we came from a racing background, so we kind of lived it,” she says. We just wanted to race cars and be like our uncle Derrike. My sister and I would say, ‘Why can’t women do that?’ You never really saw any females in the sport at that time in the ‘90s. Having family to look up to really inspired us.

“We went and raced every single weekend and were doing well. When we started beating grown men that made us think, maybe we do have something. Maybe we can be just as good as they are. That motivated us to keep moving the needle further and further.”

With the Go Kart series dominated, Angela stepped up to racing Super Late Models at the age of 15, before she even had a driver’s license. From there, she had an opportunity at the age of 21 to move back to North Carolina with her uncle to pursue her shot at NASCAR.

Angela started off in ARCA and did some testing in the Xfinity series. However, she only ran a handful of races before funding became tough to come by. After that, she took a few years off, but kept dreaming about getting an opportunity in NASCAR.

“Here I am two years later running a full season in the NASCAR Truck series this year,” Ruch says. “I ran 12 races last year and I’ll be doing a full season this year. I have some great sponsors on board, so that definitely helps things.”

Angela’s shot at NASCAR really took hold in 2019 when she ran for Joe Nemecheck.

“Running for Joe Nemecheck was probably the biggest highlight of my career,” she says. “Getting the opportunity with Front Row Joe and learning from one of the best drivers in the world was a dream in itself. I obviously always have my uncle by my side as well, but it’s nice hearing from other drivers and getting input and their take on things. Also, being the first female to lead laps at Daytona was incredible in the Truck series and getting a top 10 placing was awesome as well.”

For 2020, Angela is one of three women racing in the NASCAR Gander RV & Outdoors Truck series where she’ll be driving for Josh Reaume. Her efforts over the years have culminated in her realizing her dreams and breaking barriers within the sport of NASCAR.

“Women are more accepted into the sport today than ever,” Ruch says. “Danica opened up the doors and opportunities for younger girls to come into the sport. It’s awesome what she’s done for everybody. But in the end, we do need a female to win when it’s all said and done. We do need that W – one of us does – to really prove that we do have a presence.

Of course, being the competitor that Angela is, she won’t rest until she’s the one celebrating in Victory Lane, but outside of racing, Angela’s life has gotten a lot more rewarding as well. In 2019, Angela and her husband Mike adopted two children.

“My husband and I adopted two kids, both under a year old,” she says. “We are super, super blessed. Their names are King and Lord. I never thought I’d say this, but the most rewarding thing is coming home to two kids rooting me on. No matter how the day ended, how the night ended, just knowing you get to come home to their smiling faces – it’s the most rewarding thing in the whole entire world. Words can’t explain it.”

As if the life of a professional NASCAR driver and taking care of two young kids doesn’t keep them busy enough, Angela and Mike also opened their lives up to a Facebook Watch docuseries titled The Ruch Life.

“It’s a docuseries so nothing is scripted on the show,” she says. “It’s just me trying to make it in a male-dominated sport, earning the respect of the drivers out there that I’m racing against. You’ll see the struggle that I go through. It’s tough to be at the level I’m at. But it’s not just that. You’ll see my husband and I going through the adoption process and the good and bad with that. It’s all real life stuff that I think people can relate to. And the people that don’t understand the sport of NASCAR and how tricky it is, they’ll get to see firsthand all the things I go through. In the end, it’s pretty cool that we could share our lives with people.”

A: Daytona and Las Vegas. I love the fast speedways. The fast mile and a halves, they’re awesome. Super speedways are my favorite, obviously. I think they’re everybody’s favorite.

Q: What race are you looking forward to winning most?

A: I would absolutely say Daytona. I had a taste of it last year, and obviously this year, I started 32nd and when you start in the back, you can only go forward. To know that we raced our way up to the top five and had a taste of victory, you feel like you’re right there. One wrong move, unfortunately, puts you out of the race. Daytona is the one that I have in my mind.

A: I love Bentleys. I’m in love with them. My husband surprised me with one a couple of years ago and that’s been my ultimate dream car. Obviously, since we adopted two children, I needed a little bit bigger car, so I also have a new V12 760 BMW. It’s super cozy and super fast.

A: It depends on what track I’m at. If you’re at Daytona, being in the draft is key. You want to have friends out there so you’re not hung out to dry.

Q: What have been some of your rookie mistakes?

A: I think as drivers we make mistakes all the time. It’s how we learn from it. I’d say my mistakes last year, and I did it twice, both at Texas on the same turn, were not really understanding the draft and how the air kind of plays a part on these trucks. When you’re passing cars or you’re getting passed, you need to know where to be and where not to be because it takes air off your spoiler and puts you in the wall. Learning that last year was very, very tricky for me. It happens so fast, you don’t even know it. I promise, after doing the same thing twice at Texas, I will not be doing it this year.

Q: What do fans in the stands or watching on TV not fully understand about racing?

A: Maneuvering the draft and the air off these trucks is key. That’s what I’ve learned and I haven’t been doing it for that long of a time, so for me it’s tough to adapt to. Once you’re in the seat full time and you’re going at it every weekend you start learning a little bit more.

Q: Crashes are inevitable in NASCAR. How do you cope with that reality?

A: You never really think it could happen to you. You don’t fully realize how serious the sport really is until you are brought to reality and it hits you in the face and you see an accident like Ryan Newman had [at Daytona]. Knowing it can be any of us at any given point in time is scary. But also, in the same respect, we’re there to do a job and it’s something I’ve grown up doing my whole life, so it doesn’t change things for me. It just reminds you how serious the sport really is. NASCAR does an incredible job at keeping us extremely safe with different devices, the way the seats are mounted, the frame rails, they’re so safe today and NASCAR does such a great job with it. To know that we can walk out of those kinds of wrecks is pretty remarkable.

Q: What has you excited about the future?

A: I love that question and I hate it at the same time. I just live day by day. It’s hard for me to judge what next year holds for me when I’m trying to live in the moment today. Getting this huge opportunity of running a full season – I’ve never had that shot in my life and I want to make the most of it. I just want to make everybody happy. I hope that I can continue doing what I love to do and what I’m most passionate about – with my kids alongside me, of course.