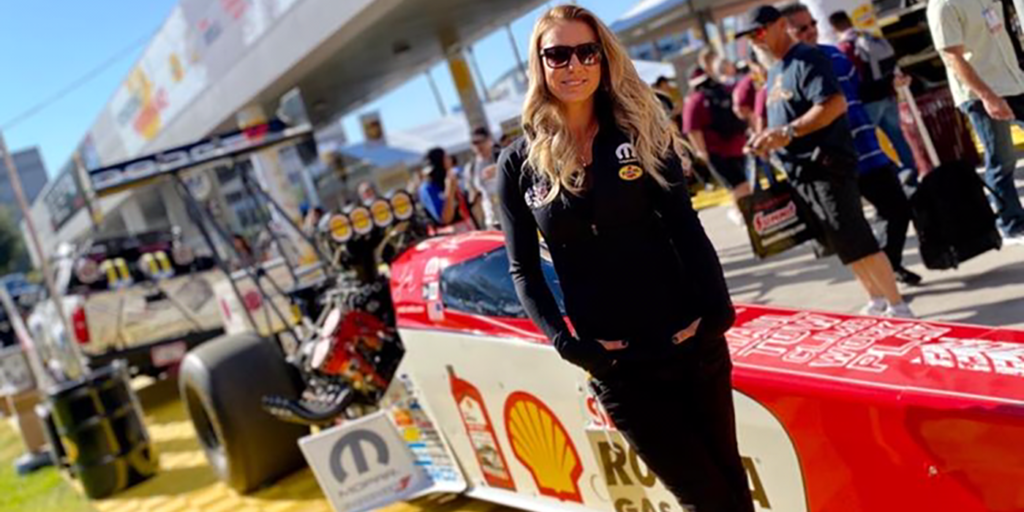 All it takes is 3.6 seconds for Leah Pruett to cover the length of the drag strip at 335 mph. Her road to becoming an NHRA Top Fuel driver – a whole heck of lot longer than that. But that has never deterred her from going after what she wants to achieve on the track. That is, once she figured out being a driver was truly her passion.

“I grew up around motorsports, but not drag racing,” Leah Pruett says. “My father was a land speed racer at Bonneville and El Mirage, so all I ever knew was scraping salt off the car and making dirt clumps. My dad wanted two boys, but he didn’t have two boys, he had two girls.”

In an effort to get Leah and her older sister into the sport he loved, he got his daughters into the newly created Junior Drag Racing League.

“That’s the first form of drag racing I ever saw was somebody in a 20 second 1/8th mile – the slowest thing in the world,” Pruett laughs. “My sister was losing. We weren’t very successful and it wasn’t a good time. My dad always asked me, ‘Do you want to race?’ I said, ‘No, that looks terrible. You guys are crying and losing.’ A month before my eighth birthday, I did the normal sibling thing and said I wanted to race. We started junior racing and I got good at racing with my sister.”

From there, Leah’s need for speed blossomed and you’d be hard-pressed to get her away from the racetrack and the sport of drag racing.

“We started traveling around the West coast collecting points, doing well and really enjoying that,” she says. “When I was about 12 years old, I went to a national event at Pomona and just fell in love with Nitro – everything about it. We would be in the stands all day. We would tape off blankets to mark our spot. I loved the cars, the Pedal Fest, the $18 hotdogs, waiting for John Force and Tony Schumacher’s autograph – all of that. Watching them disassemble the engine, I didn’t even know what I was looking at. I was racing with a Briggs & Stratton motor. But I wanted to become a professional race car driver.”

The big question in Leah’s mind – how do I do that?

“If it takes large dollars, because this is a very expensive sport, you’re going to have large, awesome partners that understand what they’re doing in the marketing space. I’m going to cater my education towards that, so that’s what I had done.”

Leah built nostalgia Funny Cars with her dad, started racing, started finding small sponsors, started to elevate her racing status with the money she was finding while putting herself through college and working. From there, she focused on someday representing the world’s largest and most reputable brands. That was the goal.

“I would attend the SEMA Show and try and talk to Shell and Pennzoil and Dodge, specifically,” Pruett remembers. “I was focused on relationship building. It’s crazy for me 10-15 years later to be in this position. I’d proven myself on the race track and won championships.

“My first big break-in point was getting a call from Don Schumacher Racing asking if I’d be interested in driving Nitro because I put it out there that I did. I guess one of the life goals in all of it was tell people what your goals are and your dreams are because they can’t help you unless they know that you need help or assistance. Not a handout, but definitely a hand up. I’ve been fortunate enough to have a lot of drive and determination and to capitalize on a lot of hand ups to make us world champions.”

“From there, I got picked up by the bootstraps and Don and I were able to build a team together,” she says. “The 2019 season was a roller coaster. That would be a really good way to describe it. In 2018, we won the World Championship in Factory Stock and we had a handful of wins and a handful of number one qualifiers. We ended up fifth in the points standings.

“2019 has been more challenging and I believe it started in the beginning of the season. We were not able to test. We always are able to and that’s a financial situation, but it kind of put us behind the eight ball a little bit in the development of what direction we wanted our race car to go. We had one win at Brainerd where we reset that track record. Unfortunately, we’ve had a plethora of mechanical issues.”

While the 2019 season didn’t go exactly how Leah and the Don Schumacher team would’ve liked, they’re focused on continuing to bring the heat anyway they can.

Speaking of racing, NHRA’s Top Fuel dragsters, which Leah drives, are known as the ‘kings of the sport’ and for good reason.

“On a good day, we like to say that we’re 12,000 horsepower,” she says. “There’s no dyno in the world capable for us to demonstrate that, but it boils down to 1,200 horsepower per cylinder. We run a 1471 supercharger. We’re limited to 500 cubic inches and we build our own blocks in-house. 3.63 seconds at 335 mph is my quickest time. We have set the national record multiple times and then somebody else grabs it. Per rule changes, I do think that 3.5s are capable in 2020.”

Something else we’ve been seeing much more of around the NHRA ranks are female drivers, and women who are beating the men, like Leah, Erica Enders and Brittany Force.

“What I find being in this space for 15 years is it would be a novelty to have a female race car driver and it would be almost a risk from a partner standpoint,” Pruett says. “If you go with your quintessential white, male, middle age driver, that’s the safe way to go. Fast forward to the progression I think the world in general has made, it’s no longer that much of a novelty and instead is actually a request to have the diversity in the sport.

“From a driver’s standpoint in the space, I feel like I’ve always had to prove myself more as a female. One, my dad told me I would never be as good as the boys, so I focused on being better than the boys. To further prove my worth, I said I would never want to be a helmet back driver, much less a female helmet back driver. That has pushed me to work on the cars, build them from a chassis standpoint with the Funny Car crew, perform clutch work, etc.

“I don’t think that the guys like it too much when the female portion gets super, super played up, but at the end of the day, take Brittany or I or Erica out of it and the fact that we’re female, the stats are still freaking amazing because of the people that make that job happen. Unfortunately for everybody else, our will as females to prove everybody wrong has become extremely empowering for other people who want to be behind it. That might be what is a threat to the very traditional way of doing things.”

For Leah, her biggest focal point is putting herself and the Don Schumacher team back in the winner’s circle.

“I’m looking to win a national championship,” she says. “I’m not satisfied with not being number one. I want to run a full season, that’s the plan for me to have 24 national events in the Top Fuel car. I want to put Don Schumacher Racing back on top.”