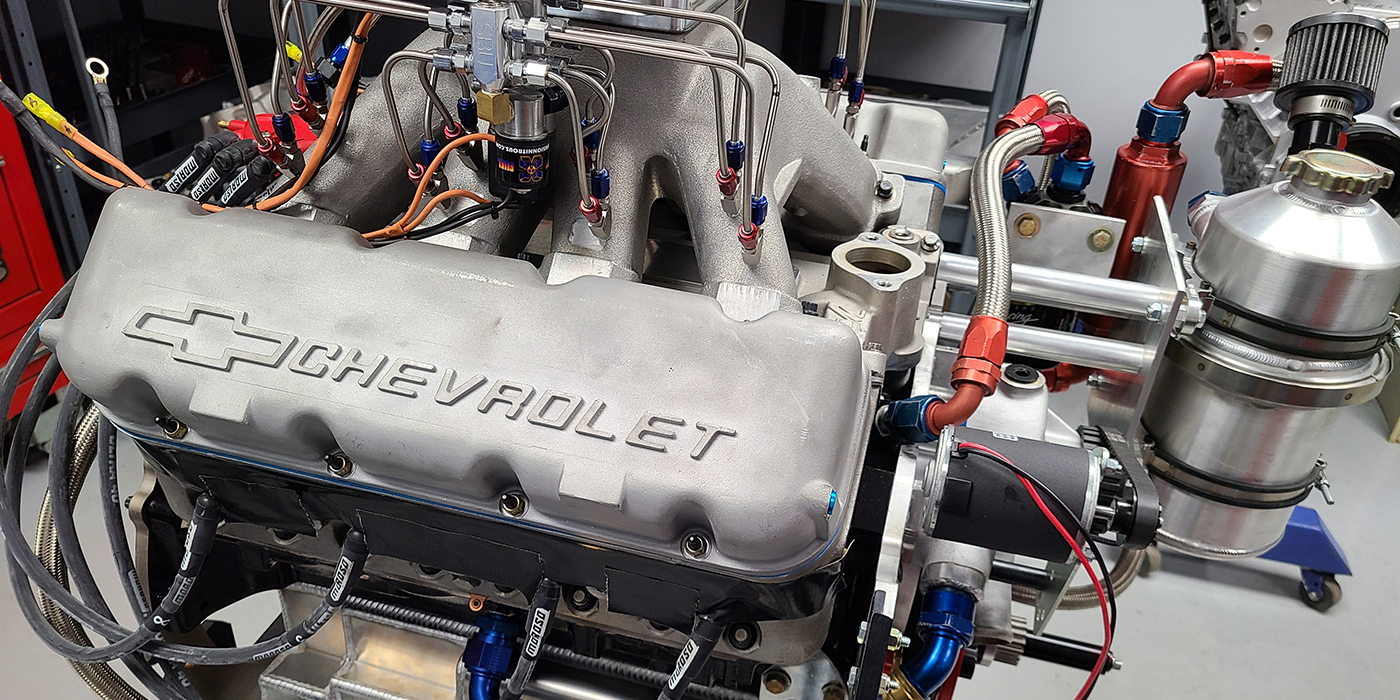 Using all the best of the best engine components, this 452 cid small block Chevy engine is one of Gibbons Motorsports more intense custom engine builds. Did we mention it also has nitrous? Find out what went into the build!

When Peter Gibbons was racing the CASCAR Super Series in Canada many years ago, he decided to open an engine shop in order to build his own engines. He quickly became the go-to shop for most of the racers in CASCAR and the shop grew from there. Peter’s two sons, Pete and Jake, have since gotten involved in the engine business, and today they run the Mooresville, NC shop, named Gibbons Motorsports, while their dad Peter enjoys semi-retirement.

“My brother and I just grew up in the shop,” Pete Gibbons says. “We were around the engines and at the race track every weekend. My dad opened the shop in 1989. I’ve been running the dyno since I was 12 years old and I’m 28 now. I started at the bottom washing parts and scraping gaskets and doing the greasy work. I was probably 14 or so when I was cleaning parts and setting up bobweights to balance cranks and helping assemble engines.

“I manage everything now and my dad is semi-retired. He comes in sometimes to help do some stuff, but my brother and I pretty much do everything now.”

“We pretty much do everything,” Gibbons says. “We do everything in-house too, that’s why we end up getting a lot of jobs because we can spec, get the parts, machine it all, assemble it, and dyno test it. Some highly specialized CNC work might go out to a couple local guys, but 90% of the stuff never leaves our shop.”

Gibbons Motorsports built its current shop about six years ago, which is located up the road from its original location, and the business has a second building that Pete says is more of an automotive shop where they recently started getting into the car side of engine work to offer customers a more complete package.

No matter how many or what type of engines get built at Gibbons Motorsports, the best ones are always the custom builds, like the shop’s recent build of a 452 cid SB2 small block Chevy engine for a customer into drag racing.

“At the time this project started, this customer was just a walk-in new customer,” Gibbons says. “Since, he has sent us a lot of other work. He’s a racer and he’s been buying pieces as we go. The guy is spending over $50,000 on the engine. It’s got custom parts and specific things that he wanted that weren’t cheap, but he didn’t mind paying for it. It has all the best of the best you can buy in it.

“It’s one we’ve done a lot of custom work on and is probably one of our most intense custom machined motors. It’s an SB2-headed small block Chevy for drag/grudge racing. It’s a 452 cid tall-deck engine.”

The build started with a raw Dart Iron Eagle block that got bored and honed to a 4.185˝ bore. The shop also bored out the cam tunnel from a standard core to a 55mm needle bearing cam tunnel and bored the lifter bores to accommodate .937˝ lifters.

“We used a Dart Iron Eagle block, a custom crank, custom rods and custom JE pistons – some heavy-duty nitrous stuff,” Gibbons says. “It is a heavy nitrous motor and has a big fogger system with two stages of nitrous. It’s got a dry sump oiling system on the front of it, so that required a lot of custom plumbing and machining to make it all work. It’s got a Peterson oil tank and an Auto Verdi oil pump.

“We used Jesel lifters, an X2 Xceldyne belt drive kit and custom T&D rocker arms to accommodate for the 1˝-lift Jones Cam Designs camshaft that it has. It’s a monster nitrous cam that has a custom mill and grind and some really radical nitrous lobes on it.

“SBU did all the nitrous stuff. It’s got an M&M single dominator cast manifold on it that I ported. It’s got a custom Dan Olson dry sump oil pan on it and we’re using a Pro Systems three circuit dominator carburetor.”

The 452 cid small block Chevy got finished with SB2 cylinder heads and Gibbons Motorsports put the engine on their new SuperFlow Powermark dyno to break it in. The engine cranked out 900 horsepower, but the shop knew there was more to be had, so they did a few more tweaks.

“We kept tinkering with some stuff and it’ll probably make somewhere right around 1,000 horsepower naturally aspirated,” he says. “We’re not going to spray nitrous on the dyno, but I think he’s going to be spraying close to 600 horsepower worth. He’ll be in the 1,600-1,800-horsepower range on nitrous. He’s running C23 fuel.”

Now it’s time for this small block Chevy to finally hit the track!