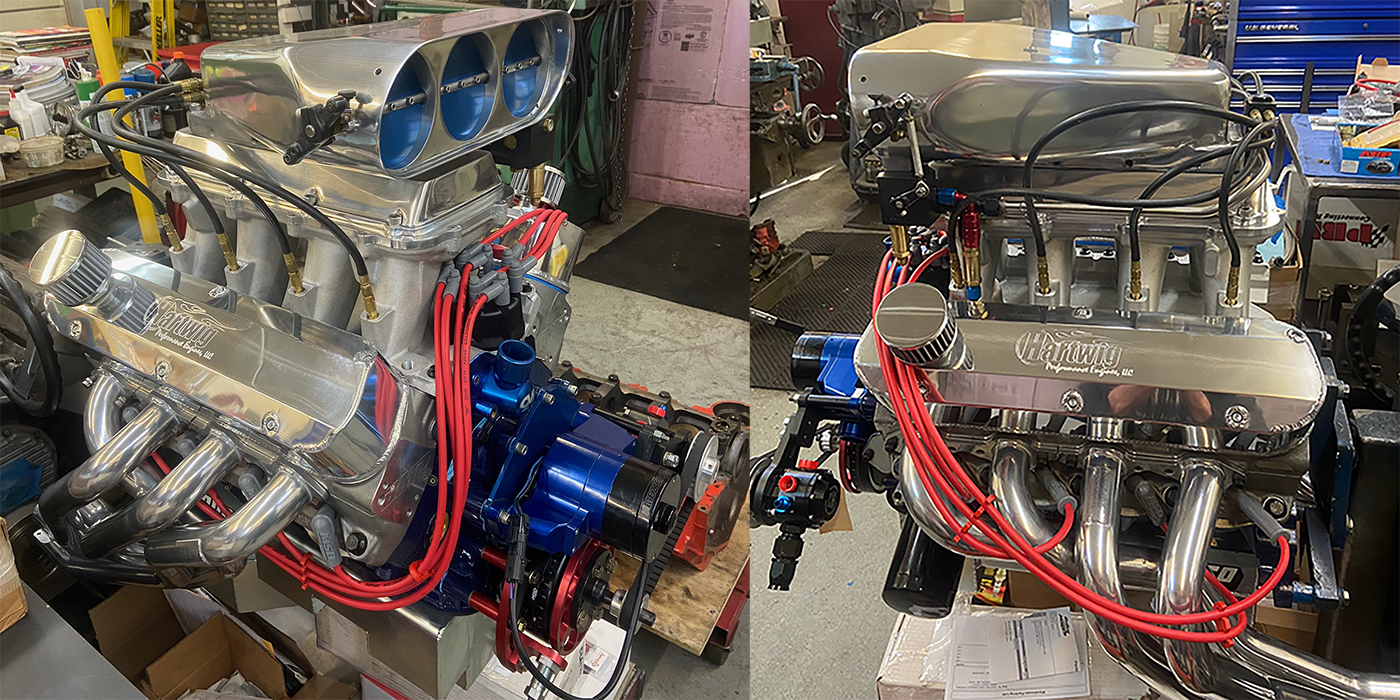 Looking to add more horsepower to his ’86 Foxbody Mustang bracket car, Adam Hartwig went to the drawing board and came up with a unique engine set up. It was this methanol injected, blown 427 small block Ford engine. Find out what went into the custom build.

“I got into engine building at a young age with my dad,” Hartwig says. “We got into tractor pulling with what they call Minnesota mini rods. We had a V8 engine that we ran for quite a few years, and that’s kind of where my background started was tinkering with my dad on his pulling tractor.”

Once he got into high school, Adam didn’t know what he wanted to do as a career. That is until they held a technical career day and Northwest Technical College advertised its automotive machining program.

“It really piqued my interest, so I ended up going that route in 2002,” he says. “I went to Northwest Tech for two years and got my degree in automotive machining. I didn’t have anything lined up at the time when I had finished school, so I went back to welding for a while until I decided to start my own engine business in October 2005. I’ve been building engines ever since.”

“We’ve done a lot of really cool, radical, off-the-wall items for guys,” Hartwig says. “We focus on the circle track stuff. We also do work for other engine builders in the area since I’ve got some CNC equipment. I do absolutely everything in-house, except for crankshafts. I do complete cylinder head blueprinting and block blueprinting.”

One of those custom, off-the-wall builds that Hartwig recently did was a methanol injected, blown 427 small block Ford for his own ‘86 Foxbody Mustang.

“The engine build is for this ‘86 Foxbody Mustang that I’m doing,” he says. “I did have an engine in it, but it just wasn’t enough horsepower. I went back to the drawing board and came up with this kind of off-the-wall recipe for a 427 small block Ford. I had never seen one with mechanical injection with the blower hat on top of a small block Ford. They don’t have a whole lot of aftermarket parts out there for that combination, so I had to really sit down and figure out how I wanted to approach that.

“What I came up with is a Dart SHP small block Ford Windsor block – it’s a 4.125˝ bore and 4.000˝ stroke, which comes up to 427 cubic inches. I had Dart leave the block just rough bored and rough decked, so I could finish hone it and finish deck it to my specs. That way I could get it blue-printed on my CNC machine.”

Internally, Adam went with an all-forged rotating assembly – a forged crankshaft, forged connecting rods and a set of Icon flat-top pistons. For the cylinder heads, he went with Ford castings from Bill Mitchell Products.

“I ended up with a 235cc cylinder head with 58cc chambers,” he says. “They flow right around 310-315 cfm at .700 lift. I ended up with a set of Howard’s 1.65˝ wall pushrods and Howard’s bronze-bushed roller lifters, which are great for high rpm and high spring pressures. I also used a set of T&D rocker arms. They’re a 1.7 ratio. I used a set of Howard’s springs, which are .235 at the seat and around .735-.740 on the nose. The engine has a mechanical solid roller camshaft from Howard’s called a big bottle camshaft.

“The engine also has Enderle mechanical injection and that’s set up for methanol. For that set up, I got some recommendations from Good Vibrations Motorsports out of California. They recommended a Waterman 700 fuel pump and their 31-32 Enderle injectors.

“For the oiling system, I just went with a Melling high-volume oil pump and I plan on running a real lightweight oil with the clearances that I’ve got, like a 5w20. I like to use Brad Penn (PennGrade) for regular use. I’ve been using Brad Penn for many, many years. I actually remember when it was Kendall GT1 when it was the green stuff. We’ve been using it since way back then. The green oil is the good oil as far as I’m concerned.”

To top off the small block Ford, Hartwig went with a Holley EFI intake manifold, which he custom machined for the Enderle injectors. He also used a Meziere water pump, a Cloyes gear drive and an ATI balancer.