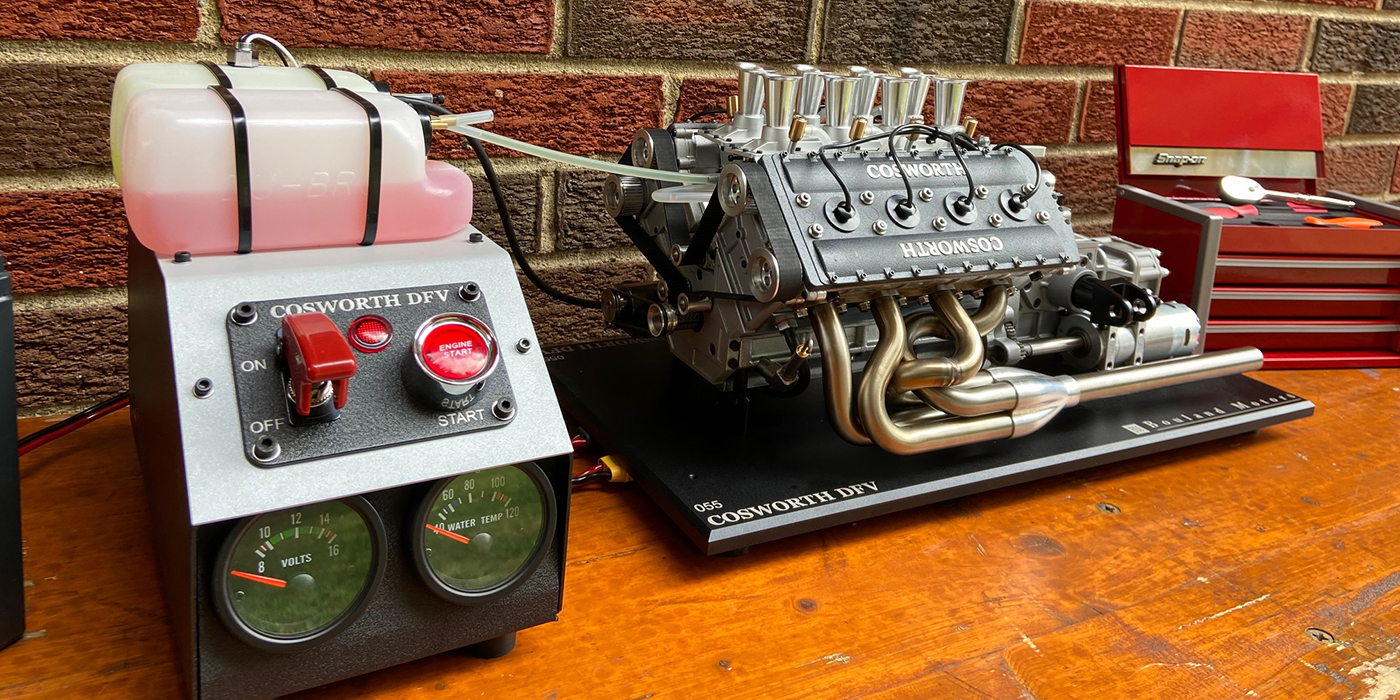 With its success, the Cosworth DFV V8 engine is considered one of the most legendary F1 engines ever, and has since inspired many in the automotive racing world. One such person is Marcel Bouland, a scale model engine enthusiast and collector from the Netherlands, who decided to develop a fully working 1:3 scale Cosworth DFV engine.

When the Ford-Cosworth DFV (Double Four Valve) engine made its winning debut in the 1967 Dutch Grand Prix at Zandvoort, it revolutionized the sport of Formula One racing by introducing a completely new concept to the Grand Prix world. For the first time, the idea of the engine forming a structural part of a Formula One car was introduced. It’s an idea that remains fundamental to Formula One even today.

Though it did not produce as much power as some of its rival 12-cylinder engines, it was lighter, resulting in a better power-to-weight ratio. In addition to being lighter, it was also made a structural part of the car itself, by placing load bearing arms to stress the block.

The Ford-Cosworth DFV engine and its derivatives went on to claim 155 Grand Prix wins. It dominated F1 racing from 1967 until its final wins in 1983, when Keke Rosberg claimed victory in the Monaco Grand Prix and Michele Alboreto won the Detroit Grand Prix, just before Formula One entered the turbo era in the mid-1980s.

With its success, the Cosworth DFV V8 engine is considered one of the most legendary F1 engines ever, and has since inspired many in the automotive racing world. One such person is Marcel Bouland, a scale model engine enthusiast and collector from the Netherlands, who decided to develop a fully working 1:3 scale Cosworth DFV engine.

Bouland’s scale model work began to catch people’s attention at the end of 2015, but at that point, Marcel wasn’t willing to sell his engine creations. That was until Glenn Debeljak saw Bouland’s 1:3 scale Cosworth himself and wanted one.

Debeljak lives here in the U.S. in Mentor, OH, just outside of Cleveland. He has a background in motorsports having worked for Scorpion Racing Engines in Cleveland in the ‘80s doing drag race and street performance engine builds, and has experience selling and promoting RC cars.

“When I saw the 1:3 scale Cosworth DFV V8, I was in awe. I wanted one,” Debeljak says. “I have promoted and sold RC cars from Italy and 1:2 scale RC go-karts from Portugal. I wanted to sell and promote this 1:3 scale Cosworth work of art. I had a Skype meeting with Marcel, and long story short, I then became part of his business.”

“The budget was way out, but it was well worth it,” Debeljak says. “The scale model has a capacity of 76cc and it’s made with over 1,200 parts. The wonderful sounding, high-revving, little V8 can rev up to 10,000 rpm producing about 7 hp. All components of the engine are made in the Netherlands utilizing the best manufacturing companies the country has to offer.”

Top quality was the utmost priority during the entire development stage. All parts went through rigorous testing, not only for aesthetics, but also for performance. Marcel builds no more than two engines a week.

The transmission attached to the model is solely for looks, but Debeljak says they do offer a working out drive for those who want to build a running model. Before delivery, each engine is tested for about one hour to ensure proper break-in of the piston rings and liners. During this period, each carburetor is also fully adjusted for optimal performance.

Marcel’s capabilities allow this 1:3 scale model engine to emulate the real deal very closely. One of the few differences to the real engine are that the cams use a belt and pulleys instead of gears, due to strength. Gears would be too small and unable to handle the power. Otherwise, the 1:3 Cosworth emulates the real V8 engine even down to titanium valves.

The engine comes assembled, tested and tuned, and also includes an original mini Snap-on toolbox with tools and starter kit, which consists of a little fuel tank, tank for coolant, 12v power supply for the starter motor, temperature and battery voltage gauges, and a starter button. For a cool $12,000, one of these impressive engines can be yours.

According to Debeljak, the market for these mini motors are historians, race fans, car collectors, and people who like fine art to display in their home or garage. As of now, Marcel only builds the Cosworth engine model, but has considered an early Porsche engine as a next project.

To date, a total of 58 1:3 scale Cosworth engines have been sold worldwide since coming on the market two years ago. There are around 60 engines left. And, if you’re wondering if you can see and hear the engine run, the answer is yes, you can! Check out this video on YouTube.

Engine of the Week is sponsored by PennGrade Motor Oil, Elring – Das Originaland Scat Crankshafts.If you have an engine you’d like to highlight in this series, please email Engine Builder Editor, Greg Jones at [email protected]

Advertisement
In this article:Elring, Engine of the Week, Formula 1, PennGrade Motor Oil, Scat