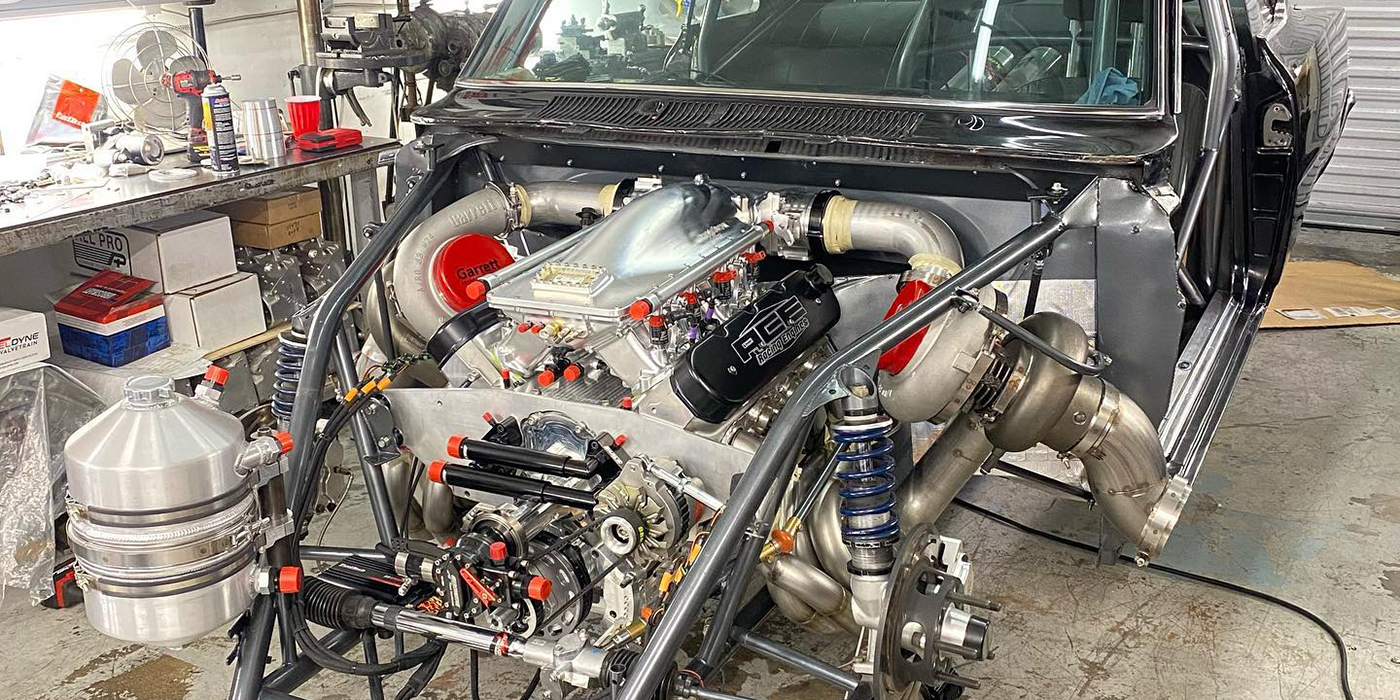 Stefan Rossi of ACE Racing Engines recently took a month off from building customer engines in an effort to focus on rebuilding his 1966 Chevy Nova SS drag car equipped with a twin-turbo 427 LS engine to compete at Drag Week. He didn’t end up making it to Michigan this year, but he still wound up with a 3,000+ hp LS build. Check it out!

We first got acquainted with Stefan Rossi of ACE Racing Engines back in March 2020, and ever since, we’ve been in awe of his engine work. Fortunately, since our first time speaking with Stef, we’ve kept in touch and he’s has been nothing but generous with his engine work, sharing much of it with us, as well as his knowledge, having contributed to the magazine a few times over the past year and a half.

ACE Racing Engines is located in Torrance, CA and was opened in April 2019 after years and years of Stef dreaming of building engines here in the States. Stefan is originally from the UK – the Birmingham, England area two hours north of London – where he grew up with a father who loved Volkswagens. The passion rubbed off on Stef as well and he immediately got into the industry.

Stefan took his early engine talents to a few shops in the UK before he joined the army at 18 years old and went on to serve four and a half years. Once out of the army, he moved to Canada for a year, thinking it would be a stepping stone to move to California. However, he learned it’s just as hard to move from Canada to California as it is to go from England to America.

After his short stint in Canada where he worked on semi-truck engines, Stefan returned to England in 2010 and opened his own engine shop, Air-Cooled Engineering.

“We just did air-cooled VW and Porsche primarily,” Rossi says. “That was more than 10 years ago. About seven years ago, I got into rebuilding American small blocks and big blocks. I found LS engines about five years ago after a friend told me I should do work on those.”

Stefan’s air-cooled obsession began morphing into a V8/LS engine obsession, and the desire to move to America grew as well.

“We started the shop in California in 2019,” he says. “I brought all my machines, my toolboxes, everything. We got an engine room and started from scratch. The aim was to come over here and get more and more into the LS engines. I’m still very busy with Volkswagen engines too, but we want to focus more on the LS stuff.”

Recently, Stef and his partner Laura Pugh, had been busting their asses to get their ‘66 SS Chevy II Nova drag car back up and running in time to make it to the 2021 edition of Drag Week. And speaking of LS engines, the ‘66 SS Nova got outfitted with a custom-built twin-turbo 427 cid LS beast.

In an attempt to get all the work done on the car and engine in time for Drag Week, Stefan took a ‘working holiday’ from ACE Racing Engines where he put aside his customers builds for a full month. Sadly, the amount of work needed and the timing didn’t pan out. Stef and Laura had to make the tough call to not make the drive to Michigan for Drag Week, but on the bright side, the Nova is 95% complete and the twin-turbo 427 LS is a sight to behold!

“We had so many last-minute issues and fabrication work to get done, that combined with the 35+ hour drive, minimal sleep and no chance to test the car either, it was too much,” Laura says. “We decided the best thing to do for our safety and in the best interest of our car, money and business would be to call it quits on Thursday (September 9).

“We are now looking to get it ready for Street Car Supernationals at Vegas in November. We will be testing locally before then and will most certainly be going to Drag Week next year, without a doubt!”

According to Stefan, his month-long thrash to get the engine and car finished up was filled with a few snags, custom parts having to be made, wrong parts showing up, parts taking longer than planned, and all the other things you’d expect out of a build of this magnitude.

“We may not of made it to Drag Week this year, but I’m stoked that after 5 years my car is finally pretty much finished,” Rossi says. “I can’t thank [my crew] enough for all of the help and graft everyone has put in. I also want to thank all of our sponsors and vendors that have been hugely involved in this build. I would have loved to finish the final few things and take the car to Drag Week, but the reality is I really don’t want to drive 35+ hours with no sleep already and an untested car that has the potential to run low 6s once dialed.

“I will take the next week to tidy the shop, begin catching up on customers’ engines and fully finish the last few things on the Nova to get out testing with no stress. I look forward to showing up next year with a fully dialed car with plenty of street testing miles on it.”

The Nova is an original 1966 ‘SS’ Chevy II Nova. Stef and Laura believe it was first home to someone in Chicago before moving to Canada where it was turned into a tube chassis drag car with a fiberglass front end. While in the UK, Stef saw it on YouTube and knew it was his dream car and had to have it. He contacted a drag strip in Canada who knew the owner and passed Stef’s details onto him. The owner was an older gentleman, and luckily for Stef, he was willing to sell it.

Stef imported it to the UK in 2016. At that time, it was a small block Chevy based around a Dart block and was naturally aspirated and ran on methanol. Stef rebuilt the engine and got the car into the 8s in the 1/4-mile, which was his goal then. However, wanting to attend Drag Week, Stef knew the engine needed to go up a few more notches.

The 427 LS engine has a 10.8:1 compression and utilizes pump gas on the street, but alcohol (M1) on the track thanks to two separate fuel systems. All of this combines to make the LS engine capable of 3,000+ horsepower!

“The Nova is a 25.1 chromoly tube chassis car with a Strange Pro-Mod modular rear end and built to be driven on the street,” Rossi says. “We are aiming to get the car to do sub 6.50s. The idea of the car/engine is to show people what can be done with a 9.240˝ deck block and the modern tech now available with hydraulic roller set-ups versus the traditional, big cubic inch, solid roller big blocks.”

With the 2021 Drag Week event behind us now, we can’t wait to see ACE Racing Engines get this Nova tested and ready for next year! See below for a video and more photos!