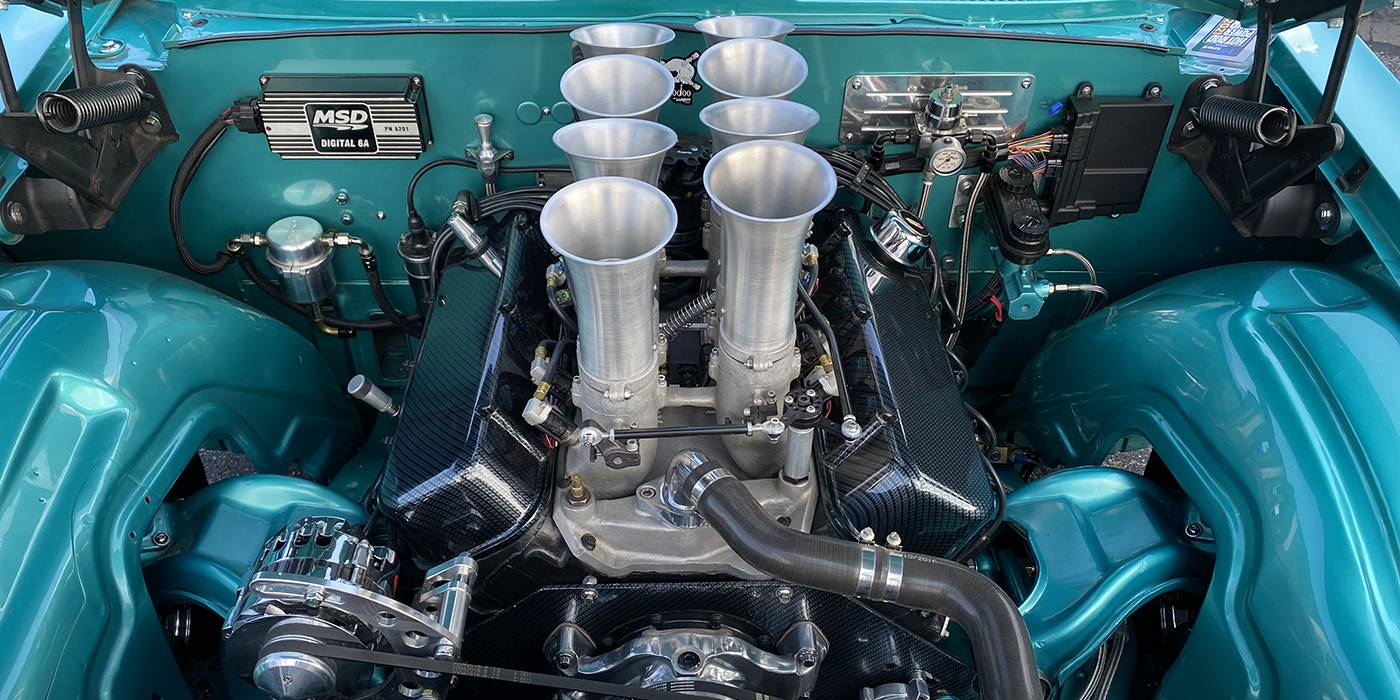 While combing Summit Motorsports Park during the 2021 Hot Rod Power Tour for some standout cars and engines, we spotted Rick Cox and his 1961 Oldsmobile Dynamic 88, which had a 454 big block Chevy engine proudly on display. We had to know more and so should you. Check it out.

Being in close proximity of Summit Motorsports and to Summit Motorsports Park in Norwalk, OH has its advantages. We’re just a mere 45 minutes from the track, which gives us opportunities to see plenty of races and car shows throughout the year. We recently spent a day in Norwalk back on August 23 to take in the first stop of the 2021 Hot Rod Power Tour before it rolled on to Dayton, OH, Indianapolis, St. Louis, and Champaign, IL.

My guess is Norwalk show out that Monday with somewhere in the vicinity of 1,000 cars, but among all those gorgeous vehicles, we spotted Rick Cox and his 1961 Oldsmobile Dynamic 88 with a 454 big block Chevy engine. The Calypso Green Metallic paint job was shining bright in the 90-degree heat, so we were drawn to it like moths to a light, and we found out more about Rick and his car.

It turned out, the 2021 Power Tour was Rick’s first, but he was certainly no stranger to cars and car shows. In fact, his 1961 Olds was a Hod Rod Top 10 Car of the Year back in 1995, and it had won the Hot Rod Super Nationals Show right here at Norwalk 26 years ago. As for Rick’s passion for cars, well, that started long ago as well.

“I’ve always liked playing with cars,” Cox says. “This is what I do for fun. I don’t do anything else. I used to golf, but now I’ve got a bad back, so I can’t golf. I used to bowl, but my back has ruined that too. Cars are what I do now.

“I grew up building model cars. I had walls of model cars. As I got older, model cars turned into real cars. That’s what inspired all these stacks on my car today. Every model car I ever built I always put the stacks on.”

Rick’s 1961 Olds restoration started back in 1990 and took five years to complete. Since owning the car, he’s had three different big block Chevy engines under the hood, opting not to stick with an Olds engine. The latest powerplant is a 454 big block with EFI that he got built at Engine Dynamics in Potterville, MI, which is just outside Rick’s hometown of Lansing, MI.

“I didn’t stay with the Olds motor – this is a 454 big block Chevy over .030˝ with a Turbo 350 behind it and a Ford 9˝ rear end,” Cox says. “I’m a customer of a machine shop called Engine Dynamics. They do a little bit of everything. I went to them and told them I wanted to run EFI. From there, they recommended what we should run for camshafts and the other components and away we went. We built it for the fuel injection and it seems to be working really good.

“We went with a marine camshaft. They recommended that I get something with a bigger lobe center line and not a lot of overlap, so that the self-learn part of that would react a little better. I’m really, really pleased. It’s working really good. I can drive it around and I haven’t had any issues with it whatsoever.

“The main other business involved in the build was Fuel Injection Enterprises. They’re the ones that did the intake and the EFI conversion, and they made it look old school with the rubber hoses and a junction block instead of fuel rails and all that.”

The BBC engine is 9.9:1 compression and runs on 93 octane fuel. It utilizes a stock crank and aftermarket rods, but the heads are cut to run bigger 2.19˝ valves and they feature all Lunati valvetrain components. Horsepower-wise, the 454 is right at 500 horsepower.

“Obviously, with a big block Chevy we could get a lot more than that, but that’s not what I wanted,” he says. “The 500 hp was fine with me. It’s got plenty of low-end torque and I can drive around and enjoy the hell out of it. I wanted something dependable.”

With this engine, Rick got exactly what he wanted, and his Calypso Green Metallic (a ’92 Ford Probe color) Oldsmobile Dynamic 88 looks just as good as it did 26 years ago.