Casey Wegner, head of the CNC department at Wegner Automotive, Markesan, WI, can still picture this scene from his childhood: His father Carl meticulously hand porting a cylinder head, which took several days to finish an entire set of ports for an eight-cylinder engine.

Fast-forward 30 years: Casey Wegner has become an expert head porter, like his father, and his company is working with Advanced Design Concepts (ADC) to recreate high-performance, hand-ground cylinder ports faster and more accurately than ever before.

The new method pioneered by Wegner and ADC is made possible by digital shape sampling and processing (DSSP), used by major automakers, aerospace companies, and product manufacturers to seamlessly unite physical and digital worlds. The centerpiece of the process is Geomagic Studio software that processes scan data from both a GOM ATOS white-light scanner and a Romer Cimcore arm outfitted with a Perceptron scanner, then digitally reconstructs and duplicates a hand-ground cylinder port for automated manufacturing. 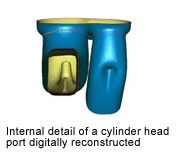 The heart of the engine

Like its process for cylinder head porting, Wegner Automotive Research has come a long way during the last three decades. Carl Wegner started his machine shop in a shed in the backyard of a 350-acre farm in central Wisconsin. He worked on everything from local hot rods to pickup trucks to farm tractors. Carl did good work, and his reputation grew quickly, especially in motorsports. It didn’t take long for the farm to give way to the engine shop.

These days, engines from Wegner Automotive compete – and win – in races from NASCAR Busch Grand National to various forms of go-kart, motorcycle and truck racing on asphalt and dirt.

A central part of Wegner Automotive’s success is the ability to use cylinder head porting to coax additional horsepower out of an engine.

Wegner estimates that his company produces more than 30 types of cylinder heads, which vary according to factors such as the type of vehicle and engine, racetrack characteristics, and rules of the sanctioning organization.

Through the years, pros such as Carl Wegner have made an art out of hand-grinding cylinder heads. But, the art is part of the problem. Once the expert has created an ideal port, it has to be replicated several times.

Although the new process was an improvement over hand-duplication, speed and repeatability were still problems. The probe captured points one at a time about an eighth or sixteenth of an inch apart. Faced with limited data points, the surfacing software could generate only approximate surfaces.

Looking to further improve its processes and gain a greater competitive advantage, Wegner Automotive turned to ADC, based in nearby Pewaukee, WI. ADC had earned a reputation for its ability to reverse-engineer complex, free-form parts for customers such as the Cleveland Clinic, Briggs & Stratton, American Blimp, Harley-Davidson and Richard Childress Racing. The company’s work spanned everything from artificial heart valves to gas tank designs to cylinder ports. 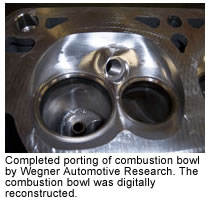 From days to hours

ADC’s initial scanning process for Wegner Automotive relied on a Perceptron laser scanner mounted to a Romer seven-axis arm. In this process, the cylinder head is sprayed with a talc to reduce reflective surfaces and mounted on a table so that all angles of the port can be captured.

The scanning captures a master set of ports, which includes an intake, exhaust and combustion bowl. Once the master set is scanned, the scanner head is replaced with a hard probe, enabling ADC to capture machined surfaces, valve guides and dowel-pin locations that are essential for placing the model within a coordinate system.

The combined Perceptron/Geomagic process improved accuracy and enabled ADC to reduce the scanning and processing time from three days to a matter of hours.

Making the next leap

Although Wegner and ADC have made amazing progress over the last few years, both companies think that the best is yet to come, and this time the implications could extend well beyond cylinder head ports.

At the beginning of this year, ADC implemented what Groth calls “hybrid scanning.” ADC uses a GOM ATOS white-light scanner to capture the overall shape and the “hard points” (datums, holes and other features) of the cylinder head, and the Romer Cimcore scan arm outfitted with a Perceptron scanner to capture hard-to-reach places. The new non-contact, non-destructive process eliminates the painstaking point-by-point collection with a hand probe.

“Nobody thought this could be done,” says Groth. “Using a scanner instead of a manual probe inside the port has reduced data capture time while increasing accuracy and repeatability.”

The process within Geomagic Studio is similar, except that the data sets are larger – around four million points. Decimation features are used to reduce data size without affecting quality. Where GOM and Perceptron data overlap, Geomagic Studio makes it easy to discern and select the best representation.

Wegner Automotive takes the Geomagic NURBS surface file and brings it into Delcam PowerMill software, which has the ability to process multi-patch surfaces. Within PowerMill, Wegner engineers specify tools and tool paths, check for clearances, and program five-axis machining. The resulting CAM file is sent for milling. 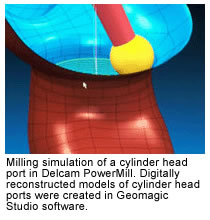 After machining, further cutting is done to get the valve angles correct, air flow is tested on a flow bench, and volume is measured to make sure it matches the master. Within a couple of days, an entire set of cylinder head ports can be recreated from an original, machined, tested, and installed into an engine.

“The process is made possible by the ability to scan inside a port and automatically surface it with high accuracy,” says Casey Wegner. “The areas that the scanner cannot ‘see’ are always filled in accurately by Geomagic Studio. People within the racing industry can’t believe how smooth our cylinder ports are.”

The ability to turn out a complete set of cylinder head ports that duplicate a hand-ground original is making a major difference in Wegner Automotive’s business, according to Wegner.

“Porting is what keeps us the busiest,” he says. “Now we can do something nobody has ever been able to do before: We can have a cylinder head handed to us in the middle of the week, prepare a complete duplicate set, and install it in an engine that is ready for a race team by the weekend.”