The Buick 3.8L has evolved from its humble beginnings as a cheap, easy to build, economy motor in 1962 into one of the best pushrod motors in the world. It started in life as a Buick V8 that had two cylinders “missing,” because that allowed GM to machine it on the same line as their V8 with common tooling. Unfortunately, that meant it had two cylinders missing in the firing order, too, so it was an odd-fire engine that sounded strange and ran rough.

That may have been okay in the ’60s, but it wasn’t good enough in the ’70s, so in 1977 Buick split the crank pins to make it into an even-fire motor that ran a lot smoother. Unfortunately, it still had a nasty primary imbalance because it was a 90-degree block with a 120-degree firing order, so the 3800 would still need a balance shaft to make it suitable for the upscale FWD cars later on. The gerotor oil pump and roller lifters were added in ’86, on-center bores were added in ’88 along with the balance shaft, and a one-piece rear seal was introduced in ’90.

The 3800 was completely updated in ’95 when it became the Series II motor that was lower, lighter, smoother, and more powerful than any of the earlier versions. It’s been installed in over 6,000,000 cars since ’95 and is still being used in some applications even today.  That’s quite a tribute to any pushrod motor, let alone one that started in life as a rough-running, odd-fire V6 in the ’60s.  With that bit of history in mind, let’s trace the evolution of the 3.8L from 1988 to 2008 and see how it has changed through the years.

Buick introduced an updated version of the 231 that they called the “3800” in ’88.  It was used in all of the FWD cars except the LeSabre that still came with the old VIN 3 motor without a balance shaft.  The 25531617/25522646 block castings had on-center bores and a balance shaft that was located in the valley above the cam.

The earlier “EV-6” block was revised in ’93.  It had an additional pad on the driver’s side for the knock sensor and another bolt hole in the left front corner, just below the deck surface, for an accessory mount.  It’s either a 24502134 or a 24502441 casting.

The block that was used for both of these applications in ’95 was unique.  It had the same 24502441 casting number that was used in ’94, but it was modified to share some common components with the new Series II (VIN K) motor that was introduced for most of the naturally-aspirated applications in ’95. So, three of the bolt holes for the oil pan were relocated to fit the new VIN K pan gasket, the cam thrust plate was held on with two bolts instead of three, and there was an extra hole drilled in an ear that stuck out on the passenger side of the block. Mixing this block up with one of the earlier ones will cost you money, so verify the application by counting the bolt holes for the cam thrust plate.  If it has two, it’s a ’95 block.

The all new Series II 3800 was used for most of the naturally aspirated applications in ’95 and for all the supercharged applications beginning in ’96. It was a low-deck block that had cross-bolted mains and a sleeve bushing instead of a needle bearing for the balance shaft. The cam bores were bigger and there was a rear seal holder that covered up the oil and water passages in the back of the block, too.  The end seals for the intake slipped over the rails on both ends, just like they did on the small block Chevys. The 24502287 casting was used for both the FWD and RWD applications.

There was another new block casting in ’97 that had one small difference: the end seals for the intake manifold were held in place with two pegs that fit into the blind holes that were located beside the end rails. It’s a 24506029 casting that was used for all FWD and RWD applications.

•1984-’88: There were two cranks used in ’88, one in the VIN 3 and another in the VIN C. The VIN 3 motor that was carried over for the LeSabres still had the original 267 casting that had been used in all of the FWD motors since ’84, but the VIN C engines came with a different crank.

•1995-’08: The lightweight 2170 casting that was introduced in ’95 in both the VIN L and VIN K engines has been used for all the FWD and RWD Series II/III applications including the VIN 1, the VIN 2 and the VIN 4 engines since then.

There have been several rods used in the 3.8L over the last 20 years.

There’s a 742 casting that has a star instead of a dot on the shank that appears to have been used for the supercharged engines.

We have seen some 359 castings that look just like the 742 rods except that the top weight pad is machined off so they weigh about 680 grams. We SUSPECT that they may have been used in the ’95 VIN motors that had the lightweight 2170 crank, but that’s only a guess.  We use them in sets in the ’95 VIN L motors.

The rods in the Series II motors were quite a bit shorter because the deck was quite a bit lower. They measure 4.130? bore-to-bore compared to 4.750? for the earlier rods and they weigh about 630 grams.  They’re all bushed and they have a 669 casting number.

The supercharged Series II engine that came out in ’96 had a shorter rod that was considerably stronger and heavier. Our sample rod weighed 692 grams. It has a bushing and it measures 4.0? from bore-to-bore. We’ve seen them with either a “46” or an “868” casting number on them.

When GM upgraded the 3800 to a Series III in 2004, they switched to powdered-metal, forged rods. We haven’t seen any of them yet.

Buick has used five different pistons in the 3800 since ’88. Here are the applications:

The pistons used in the supercharged engine had a lower compression ratio and full-floating pins.

These pistons were an all new, lightweight design that had short skirts, narrow rings and full-floating pins.

The pistons for the Series II/III supercharged motors are unique, too. The compression height is different because the supercharged rods are shorter, the lands are wider and the dish is smaller, but deeper (see pictures). There are significant differences between the various pistons, so none of them can be interchanged.

There were three part numbers used from ’91 through ’95 including 25536869, 24501458 and 24503401. We haven’t seen a casting number on any of these cams, but they’re easy to identify visually because they have a threaded hole in the snout instead of a flange and the cam journals measure 1.785?. These cams were used for both the naturally aspirated and supercharged engines and can be interchanged for any of these applications from ’91 thru ’95.

There have been six different cylinder heads used on the 3800 since 1988, seven if you count the old style head on the VIN 3 carryover engine that was used in the ’88 LeSabres, but some of the differences in the later heads were just minor changes to the same basic casting. Here’s the chronology:

The heads were revised for use on the new on-center block. They looked like the ones that had been used on the FWD 3.0L engines and they came with bolt-down rockers that were located with steel guide plates.  These castings had eight bolt holes plus two blind holes for dowel pins on the intake side. Look for a 25529723, a 25534250 or a 3485 casting.

These heads were identical to the ’88 castings except that the upper left bolt hole (facing the intake) wasn’t drilled, but they have a different casting number; they’re either 24500619 or 2136 castings.  We see more of the earlier heads with the eight bolt holes, so we end up building most of these engines with the eight hole heads.

The VIN L engines came with the same 0619 or 2136 castings that had seven bolt holes for the intake, but they also had a vent hole drilled in the intake surface at the left end of the head when facing the intake ports.

The 2136 castings were modified again in ’93.  They came with 5/16? bolt holes for the roller rockers that were located with aluminum guide plates.

The Series II engines got all new heads that had heart-shaped chambers, bigger intake ports and cast roller rockers.  There were several castings including the 478/4781/8134 and 2261 that are all very similar, but the intake ports on the 2261 are slightly different, so we always use them in pairs.

The heads for the Series II/III supercharged motors are similar to the ones used on the regular engines, but they have three holes right above the intake ports for the injectors. Look for a 4781 casting.

There have been three balance shafts used in the 3800.  The early ones have a needle bearing in the block and the later ones use a sleeve bushing for the back journal.

The CN24502389 balance shaft was used for all of these applications from ’88 through ’95. It had a wear sleeve pressed on the back journal so it was compatible with the needle bearing.

These Series II/III motors had a different balance shaft.  It’s a 334 casting that has a total of four notches in the edges of the counterweights. It weighs about 2190 grams with the bearing still on it. These balance shafts have a hole that goes all the way through the rear journal that bleeds off the excess oil pressure that can build up behind the back journal.  This wasn’t a problem with the needle bearings, but it was a problem when the sleeve bushing was used on these engines.

The late supercharged motors have a special, heavy balance shaft that weighs about 2480 grams with the bearing included. It’s a 336 casting that has a total of eight notches in the edges of the counterweights.

So, that’s the story of the “little engine that could.” The 3.8L Buick may have come from humble roots, but it’s considered to be one of the “most significant V6 pushrod engines ever designed.” It’s been selected as one of the “ten best engines in the world” by Wards three times and is the benchmark for others in the industry. GM has built over 25 million 3.8L Buicks and six million of them have been built since ’95.  That means there are a whole bunch of Series II and III motors that are in cars that will be worth fixing when the time comes, so we should all see our share of these engines in the years to come.

Doug Anderson is Manager of Technical Services for Grooms Engines, located in Nashville, TN. He has authored numerous technical articles on engine rebuilding for Engine Builder magazine for more than 19 years. Anderson has also made many technical presentations on engine building at AERA and PERA conventions and seminars. To find Doug’s other articles search our archives by author, engine make and model.
More Most Read Articles… 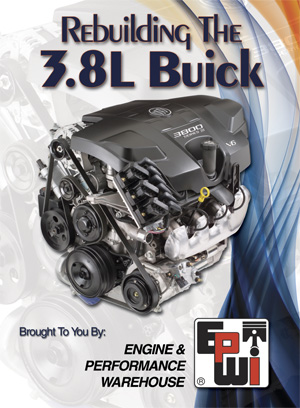 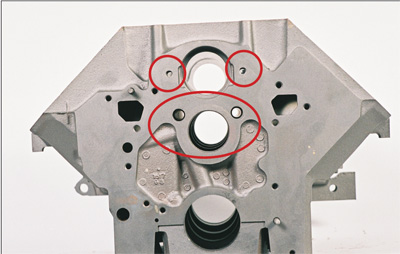