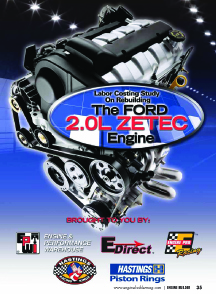 If a name works, why not stick with it? That’s pretty much the attitude that Ford has taken with regard to its popular inline four-cylinder engine named Zetec.

The SVT version provided much higher output thanks to its 10.2:1 compression ratio and larger valves.

A variety of issues were present with this engine over the years, say experts, including persistent valve tapping if a certain Ford oil wasn’t used. Still, this was a popular engine that you’re likely to see now in your shop.

The charts begin on page 40. In addition, the detailed chart on page 38 represents the national average, median and mode labor charges for all of the procedures covered in our survey.

Your operational procedures may allow you to be more productive than these charts indicate. Conversely, you may find your costs are significantly higher than others in your same area. These discrepancies should not be seen as indicating that your costs are either too high or too low.

According to Bob Roberts, Market Research Manager for Babcox Research, these discrepancies may be seen for several reasons.

“In some shops, certain operations may be included while doing others and this may lead to a larger dollar amount charged. Additionally, some shops may have given us an ‘each’ price when we wanted ‘all’ or they may have included an ‘all’ when we asked ‘price each,’” Roberts says.

“Some shops reported to us that they perform some repairs on a ‘time’ basis. We did not use a dollar-per-hour value if they provided it. A few shops price all their repairs on a ‘time’ basis. This is most common with welding repairs.  Some shops do not perform all the operations listed and this leads to a smaller number of observations and thus a less reliable average,” Roberts says.

“In all cases,” he concludes, “the national average will be the most accurate figure.”