Building Engines for the Street and Strip - Engine Builder Magazine

A lot of engine builders who sell crate engines as well as custom engines promote “street/strip” engine packages. The implication here is that such engines will run well on the street and still be competitive on the drag strip. These engines are typically rated anywhere from 450 hp up to 650 hp for small blocks, and up to 800 hp for big blocks running pump gas.

A “streetable” racing engine or a “raceable” street engine appeals to a broad spectrum of potential engine buyers because of its flexibility. Yet everyday street driving is not the same thing as serious drag racing.

Street performance engines are all about driveability, throttle response and low to mid-range torque. Drag engines, on the other hand, are all about brief bursts of power, acceleration and pushing a vehicle from the starting line to the finish line in the least amount of time. The trick is to build an engine that can satisfy both sets of requirements without making too many compromises. The street/strip engine that results should be one that starts easily, idles reasonably well and can be driven normally around town, yet delivers serious go-power when the pedal is to the metal.

Building a street/strip carbureted engine is more challenging than building a fuel injected street/strip engine because of the fixed jetting, choke and accelerator pump in the carburetor. A street engine needs a certain amount of intake vacuum to pull fuel through the carburetor. For good throttle response, you can’t go too big on the cfm (cubic feet per minute) rating of the carburetor. A 600 cfm is probably the best choice for a street driven small block engine, and a 750 cfm for a big block motor. For starting and cold driveability, you have to retain the choke on a street engine. And for emissions, you have to retain the PCV and EGR vacuum hookups. You also can’t go too rich on the jetting for a street carb otherwise you’ll kill the fuel economy – and also create emissions problems for your customer if the vehicle ever has to be smog checked. 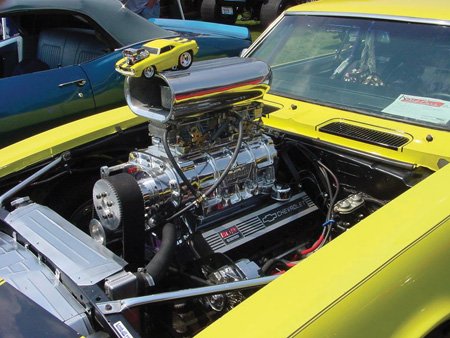