Building championship-caliber engines isn’t a new concept to Jeff Williams. Since he started building his first stroker 302 Ford at age 14, the West Texas native/Southern California transplant has been looking for ways to go faster than his competition.

These days, that’s often a very challenging assignment. But more on THAT in a minute.

“I’ve loved cars since I was a kid,” says Williams, driver of the #28 SoCal Racing Supply Ford pickup competing on the Southwest Tour Trucks (SWTT) series. “My ’67 Mustang had a 347 cid (stroker 302) when I was 14. I built the engine so the car would be ready when I turned 16. It was built off the high-nickel content Mexican 302 with a set of Allen Root aluminum heads. It was ported, had a roller cam – that thing was a real screamer.”

Honing his racing skills on the drag strips of West Texas, Williams was comfortable with the on-track side-by-side competition. However, in 2000, after moving to Newbury Park, CA, he abandoned straight-line speed for the endurance of circle track racing – and soon found himself in a challenging predicament.

Once he started racing in SWTT, he started developing his own Ford engine package, one that would compete with the Chevrolets preferred by a large number of the racers.

SWTT rules specify that only two engines are legal for competition: the Ford 302 and the Chevy 305, both with stock factory bore and stroke for that type of engine only. In addition, however, the GM 350/350 “602” crate engine is a legal motor, so Williams’ engine program had to be up to the task. It was.

“By 2003 I was doing really well with my Ford engines and other teams started noticing that I built my own stuff, that I was doing well. Word got around and it all kind of took off from there.”

“I’ve built other engines in my day,” says Williams, “but the vast majority – probably as much as 80 percent – lately has been small block Fords.”

Williams builds engines for seven of his competitors in the SWTT. He says it’s challenging enough trying to race against his own creations on a regular basis – try going on a Saturday night knowing you were at a predetermined disadvantage.

That’s exactly what the Ford drivers experience, Williams says. “A few of the Chevy drivers run open Chevy 305 engines, but not very many. The majority of them use the 602 Chevy crate motor that they buy either from the SWTT or from a GM dealer.”

Despite the fact that the crate motors must be sealed and that teams can’t make any repairs or modifications to them, Williams says his Chevy competitors like the engines for one main reason: power.

“It’s not easy to beat these guys because they have 30-40 lb.ft. torque advantage over us,” he says. “I’m building 302 Ford motors to run against 350 crate motors…and, frankly, winning pretty regularly.”

As with most sanctioning bodies, the SWTT puts significant restrictions on what is and isn’t legal in an engine. No custom strokers are permitted. A maximum .060? cylinder overbore is permitted.  The maximum cid for a Chevy is 316 cid and 311 cid for the Ford. No titanium parts are permitted (except for valvespring retainers). No aftermarket coatings are permitted.

Nonetheless, Williams and his Ford teammates are making it work on the 1/4-, 3/8- and 1/2-mile short tracks across California, Nevada and Arizona the SWTT calls home. How? “Without giving away too many details,” Williams says, “we’re making our power by turning more RPM. We’re making our torque with the gear.”

The question might naturally be asked: is Williams a racer who builds engines or an engine builder who races? Although the majority of his efforts might be seen as for other people (after all, he builds one engine for himself, more than seven for others), Williams is first and foremost a competitor. “I’m a racer who builds motors,” Williams acknowledges, “and it’s been that way since the first race.” Because of that competitive fire, there must be certain advantages he could get by simply building in a little less power, right? Williams is quick to quash the notion that his customers somehow are shortchanged just because they’re racing against him.

“I build the exact same motor that I put in my own truck,” he says. “We all have identical components, unless they can’t afford a certain part and need me to use something cheaper. I don’t like to do that, but I will if it’s what they need. The majority of them all have the same thing I do.”

It’s a formula for success that just keeps getting refined. “I’ve won the last three SWTT championships in a row,” says Williams, “ and as of this point in the season I’m about 30 points out of the lead this year. The number 22 truck has finished second and third quite a few years. The number 44 has the same history. In fact, five of the seven guys I build for are consistently in the top 10 in points.”

It’s the desire by a first-place racer to also be known as a first-class engine builder that drives Williams to be accessible to his customers no matter the situation.

“They buy the engines from me, they don’t lease them. Maintenance depends on the person and how much they want to spend after the sale. I have guys who want the engine refreshed after every season and I have other guys who want to buy a new motor every year,” Williams explains. “I also have one guy who has run his engine for three seasons now and I haven’t touched it.”

So service may or may not end after the sale, but Williams doesn’t turn his back even in the most competitive times. “A few races ago one of my guys was pitted right next to me. He pulled into the pits and I said, ‘It sounds like you have a dead cylinder.’ He agreed that it wasn’t pulling on the straights so I came over, pulled the valve cover and sure enough, he had broken a rocker stud. I ended up fixing it for him right there, he went back out and did very well.”

The Secret To His Success

Jeff Williams attributes his success to two things: first, the sturdy, repeatable engine program he has been developing over the past decade. “I’ve determined my own package. It’s been developed from stuff I’ve tinkered with and tried over the past 10 years and, honestly, it’s going really well right now.”

Williams’ other secret is Dave Kemblowski, owner and operator of The Balance Shop in nearby Reseda, CA. “We met when we moved here from Midland, TX in the late ’80s,” says Williams, “and he’s been a great part of my success. He does all of the block and head machining, all the balancing. He’s a great guy who does great work for a reasonable price.”

Part of the service Kemblowski offers is core sourcing, an issue Williams fears will be more and more important in the seasons to come. “Dave sources my cores for me, both blocks and heads. On the Ford, the best head is the GT-40-P head, which came on all the 5.0L Cobras and Ford Explorer V8s. That’s the head everyone tries to use but they’re getting scarce, so I don’t know what we’re going to do in the future.”

To help him source his other top quality parts now and into seasons to come, Williams opened SoCal Racing Supply this year. It serves as both his WD, team sponsor and offers contingency money to SWTT competitors. Williams says that while SWTT racing has been very good to him, he admits the differences between building a winning circle track engine and a powerful drag motor are fairly significant. “Building a circle track motor requires you to be more creative and exploit every last detail to find the power you need. Because there are so many engine rules, you must be able to work within the specifications. On the other hand, when building a drag motor, you’re pretty much unlimited on what you can do.”

So is a return to the quarter-mile shootout a likely scenario? “I’ve done small block Chevy’s, Mopars here and there,” Williams said. “Who knows, I may get back into building drag cars at some point.”

So what does the future hold for the 38-year-old Williams? Does he foresee racing or building taking the backseat? “Actually, they’re both in the future for me,” he predicts. “I absolutely love doing both and I don’t see either one of them stopping.”

And in the meantime, look for the driver of the #28 truck answering questions and wrenching under a competitor’s hood and you’ll know you’ve found a happy man. 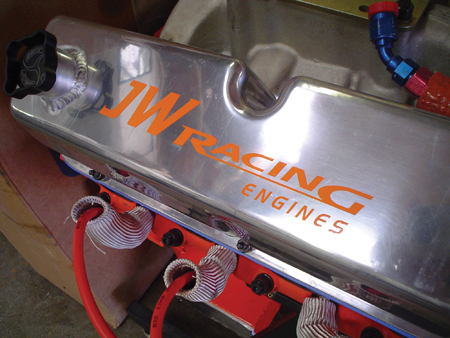