Today’s engines are being designed with more valves per cylinder with smaller valves to reduce valve train weight and increase intake volume. Cylinder heads typically require valve guide and seat work to restore compression and oil control if you are rebuilding the heads.

For the valve to seat properly and to gain the most power and efficiency, engine builders must replace or bring back to spec all valves, seats and guides. Drilling, reaming, replacing valve guides, removing worn, loose or damaged valve seats, cutting new seat counterbores and machining valve seats are all part of the reconditioning process that your shop must be able to handle with precision and accuracy.

If selling an engine with new performance cylinder heads, some builders buy the bare castings and install their own selection of springs, valves, guides, etc. to fit their customers’ needs. We talked to several suppliers and manufacturers about choosing the right valves and guides for your next engine build.

Intake valves are typically heavier than exhaust valves because of their larger head diameter. Consequently, the weight of the intake valves is more of a limiting factor on the rpm potential of the engine than the exhaust valves. Even a few grams less weight can make a significant enough difference if the engine revs up to 9,000 rpm.

Many valve manufacturers today are taking some of the heft out of intake and exhaust valves by using hollow stem valves. Hollow stems are created by gun-drilling and micropolishing to make it hollow, similar to a pushrod. The drilling is only done in the upper 2/3 of the stem where rigidity doesn’t matter as much as it does just above the valve head. After the stem has been drilled out, a hardened tip is welded onto the top of the stem. The result is a valve that is about 20 percent lighter than a valve with a solid stem.

Nitriding is a hardening treatment that, even though not as widely used as chrome coatings, has several benefits and is becoming very popular, especially for European and Asian engine applications. The microhardness is higher than the stainless steel base material, which is typically 21-4N, keeping good ductility beneath the hard nitrided layer (microhardness is 800HV minimum). The surface finish is smoother than with chrome stems, creating less friction between the stem and guide.

The nitrided valve seat surface is harder, lasting longer with unleaded fuels, alcohols, nitro or other exotic blends. Nitrided valves match well with any type of seats such as nodular iron, powdered metal, hard aluminum-copper or beryllium-copper seats. Higher rpm engines can benefit from all of the features of a nitrided valve as the nitride layer is applied at a microscopic level so it doesn’t flake or break if a valve touches a piston. The nitride is applied to the entire valve whereas chrome coatings are only applied to the stem.

Are reclaimed valves still a viable option for production rebuilds? Some experts say that it is better to use new valves as the price has dropped for replacing them and you know the material quality probably won’t be an issue. However, according to one expert, reclaiming valves is very popular, especially abroad, where availability often plays a role. This is were the guideliner comes in very handy due to the fact that an 8mm liner fits an 8mm Toyota, 8 mm Mazda , 8mm VW, etc.

Yet another opinion from one of our experts is that reclaimed valves are not a viable option, even more so today with the ever changing fuel environments they are subjected to, including ethanol, CNG or alternative fuels in general.

Exhaust valves are typically made of 21-4N, 23-8N for many performance applications. These materials are austenitic, nitrogen-bearing chrome-nickel alloys possessing excellent high temperature strength, hardness and corrosion resistance to combustion products. Inconel is another material called a “superalloy” that is often used in exhaust valves where there are very high temperatures. Its use is growing among turbo and supercharged applications. Stellite facing alloys are being used in high heat, high combustion applications such as CNG, marine and also turbo diesel applications.

In the later applications, exhaust materials are being used with facing alloys on the intake. The New EGR requirements on the heavy-duty side have driven this due to the excessive heat, new low sulfur diesel and changes to fluids and oils. On the intake, traditional intake materials are still being used with normally aspirated and some turbo applications. These alloys are typically Silchrome 1 (Sil 1) and 8645H.

For many late model and performance engines, the intake valves are made of an alloy called Sil 1 that contains 8.5 percent chromium. However, the type of material you should choose depends on the application and temperatures. It starts from low-alloy steels Sil 1 to medium-alloy steels (21-2N, 21-4N, 23-8N) and superalloy steels with high nickel content (Inconel, Nimonic). Experts say new alloys being developed include proprietary combinations of nickel, chrome, molybdenum, etc.

Others use SAE EV16 (23-8N). The appropriateness of the substitution depends on the application and the fuel (CNG, LPG, etc). The problem is that the magnet trick (checking for magnetism in a diesel exhaust valve head) doesn’t tell you anything since austenitic steel and nickel-based superalloys are all non-magnetic.

Cast iron is still widely used, however experts say new proprietary cast iron materials are popping up everywhere in order to combat the wear encountered on engines such as heavy-duty diesels. With these engines, the EGR applications, low sulfur diesel and lubricants have driven this trend. Powdered metal versions are becoming widely used in heavy-duty also.

These powdered metal (PM) versions are also proprietary materials. Special coatings such as phosphate and added heat treatments are also becoming the norm for the heavy-duty side, says one supplier. On the automotive side, PM is widely used as well as cast iron. Bronze valve guides are still widely used in European applications.

According to one valve guide supplier, guideliners that are made of a phosphor bronze have excellent lubricating properties. He says that his company offers a coated liner that has a Teflon-like coating. The flexibility of the liner makes it a very fast, cost-effective way to repair guides. When looking strictly at liners it becomes a lot easier. The liner is very compatible with chromed, non-chromed, nitrided or coated valves, any of these will work, in general, with all fuel applications. This gets a lot more tricky when combining cast guides with the right stem finish and the right fuel application.

Today the technology available to engine builders allows you to, at minimum, duplicate the life of an engine. In order to reach these quality levels (e.g., a rebuilt engine that has the same guarantee as an original one), components such as valves and guides must usually be replaced with new ones and not used or reclaimed ones. But there are some applications where reclaimed components make sense, such as when parts are not available otherwise or cost is a factor.

Experts caution that just because it fits doesn’t mean it’s the right part for your application. Hardness changes with operating temperatures. Mat-erials that are harder at exhaust temperatures may be softer at intake temperatures. That’s why at least keeping the OEM material specification is very important. Improvements over the OEM materials are offered by some reputable aftermarket manufacturers and suppliers. 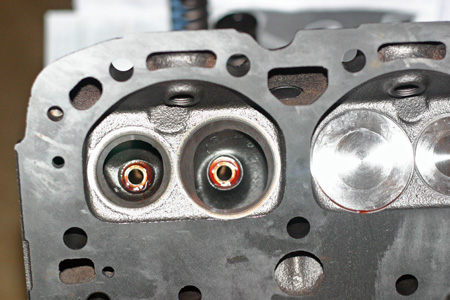 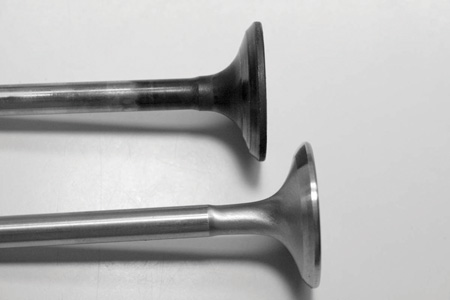 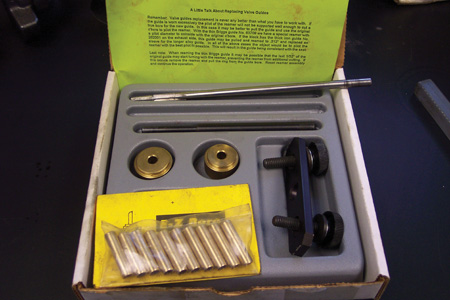 The first step for installing bronze guide liners is to assemble the parts for the boring reamer. Install the bushing, then the spring, and finally the retainer. You now have a reamer kit. Insert the reamer kit in an air/electric drill. The proper drill should not exceed 1,000 rpm under load. Next, choose the appropriate 60° seat collar for your application and install it on the reamer bushing. Insert the reamer pilot into the valve guide to be bored, and hold the seat collar down on the valve seat.

If you hear a “rumble” during the operation, this is “chatter.” To eliminate chatter, just push a little harder. Bore all guides, and blow away the chips.

Once all the guides are bored oversize, turn the cylinder head over so the “spring side” is up. “WET BRUSH” each bored guide with a nylon brush and a lube (Cutting & Tapping Fluid works well). Spray the brush approximately 1 second and clean each guide. Repeat for each guide.

Insert the auto-driver in a “short stroke” pneumatic hammer (more than 3000 blows per minute, and set the regulator to about one-half power. Insert a bronze-liner on the auto-driver so that the “Speed-Lead” end will be inserted into the guide first, then install.

Note: The auto-driver will install the bronze-liner “FLUSH”. This operation should take between 3-5 seconds.

If you have chosen a bronze-liner that is longer than your application, the excess length will be protruding from other side and must be trimmed off. This operation is generally performed after the sizing operation, as the bronze-liner will grow slightly.

Caution: Distortion will occur on the bronze-liner if too much power is used during the installation operation. This will make the sizing operation difficult.

Using the carbide sizing ball install the ball driver into a “short-stroke” pneumatic hammer and adjust the power to about one-half. Select a carbide sizing ball .001? larger than the desired finished size and set it on top of the guide. With the pneumatic hammer in one hand, use your other hand to hold the tip of the driver with your finger and thumb. Then, with slight down pressure, start driving the ball. Once the driver tip is inside the guide, release the driver with your fingers and move your hand under the cylinder head and catch the ball when it comes out of the guide.

Note: Before sizing the next guide, trim the first one to length and check the “fit,” using the appropriate size valve. Use a larger ball, if necessary, and repeat the process. When the desired size is achieved, size the remainder of the guides.

We suggest having several different sizing balls on hand, as there will always be a fluctuation in valve stem dimensions. After all the guides have been sized, the excess length must be trimmed off.

To trim, insert the appropriate pilot into the trimming tool. Install the trimming tool into a 500 rpm air drill, and trim off any excess material. If a “burr” is created during this operation, it can be removed with the chamfer tooll that has been installed in a “T” handle.

As a final step prior to assembly, it is recommended that the bronze-liner be brush-honed. This increases the surface finish, which gives the guide greater oil retention. – Source: Goodson.com