I thought I had explained everything in the previous article. But after a visit to a popular parts retail website that showed me 85 separate listings under engine assembly lubes from over 25 suppliers, I began to understand why engine builders are having trouble selecting these products!

For this article, I will try to help you make better informed decisions when choosing assembly lubes and lubricants. First, do you need engine assembly lubes at all? As a physicist-motorhead who has built and destroyed his share of engines, I think so.

When metal-to-metal contact occurs in an engine, localized overheating is created. This can wipe a bearing almost instantly. There are other areas in an engine (e.g., push rod tips, rocker arms) that don’t receive lubricant until a few seconds after the engine has been running and oil spray is established.

As far as lubrication goes, any reasonable amount of oil will protect surfaces by preventing metal-to-metal contact if it contains sufficient Zinc dithiophosphate (ZDP). Thinner oils can rapidly run off the surfaces they are intended to protect. Heavier oils run off more slowly, so they are more effective if the engine is to be stored before use.  Today’s passenger car and truck oils don’t contain sufficient (ZDP) to protect parts which haven’t yet been broken in.

The ultimate, of course, is grease.  Grease is simply oil which is contained in a waxy, soap substrate. The substrate keeps the oil from running away until it is needed. When operating temperatures rise, the substrate melts, and the oil flows to the component to do its job.

Don’t use grease on every part of the engine because it is so stiff that it will make that first start difficult. Use grease only where oil flow and surface protection is less than desirable such as:

Although I’m a fan of using grease where it’s needed and heavy oil everywhere else, I did experience something scary about some greases.  Some greases do not dissolve in oil. I was at a NASCAR shop when they fired up a new engine. After a brief break-in regimen, the dyno operator took the Oberg apart to look for engine damage. There were small, white particles all over the surface of the Oberg screen. From then on I’ve insisted on using assembly greases that dissolve in oil.

Those particles floating around in the engine make me nervous. What if one of them blocks an oil feed hole? One doesn’t have to gamble, since most greases out there dissolve in oil. Be sure to ask your supplier that direct question.

If the engine will be fired up and broken in immediately, then heavy oil, STP, or a mixture of heavy oil and STP (with adequate ZDP) will probably give adequate protection.  Before engine assembly lubes were invented, I used a mixture of STP and SAE 30 grade oil plus added ZDP as an engine assembly lube.  Back then I still used grease on flat tappet cams and lifters.

The problem with heavy oils and STP is they weren’t formulated to be engine assembly lubes. New Shell Rotella, for example, contains less than 0.01% weight  zinc. I like to see at least 0.02% zinc for initial startup.  They will work, but chemically engineered engine assembly lubes contain ZDP chemistry for extreme pressure (EP) protection and rust inhibitors to prevent rusting of vital components.  Rust on a valve spring can significantly affect its elastic limit or even cause it to break under extreme circumstances. Tackifier agents are also used in assembly lubes to help the oil cling to the surface to be protected longer.

None of the above will protect an engine if it is put together dirty. We mentioned that last time, but any speck of material which is harder than cast iron and larger than the bearing clearances can easily destroy the perfect engine build. Engine components can’t be cleaned too much before putting the engine together. I clean my blocks in soap and water and then spray them down with WD-40 in hopes of removing all potentially dangerous particles which might be embedded in the porous cast iron or aluminum. I clean lifters and rocker arms in solvent to remove machining debris, blow them dry, and then soak them in break-in oil.

I’ve also begun using fluids on bolts which are to be torqued.  ARP started this trend, and I agree with them.  Using a lubricant on a bolt does two things. First, lubricating the threads means the bolt will pull down more evenly with less stiction.  Secondly, a lubricated set of threads means a bolt will be pulled down tighter at the same torque wrench reading (more bolt stretch), because friction between the threads has been significantly reduced.

I should also comment about GM E.O.S. as a lubricant supplement.  E.O.S. was originally designed to add more ZDP and other additives to ’60s design oils which weren’t very heavily compounded. Oils of today have two to three times the additive content of 1960s oils, with the exception of ZDP. The only thing they need to be more effective is additional ZDP, rust inhibitors, and tackifiers. I’m not certain E.O.S. is the best answer for today’s engines and oils.

This brings up the subject of brand marketing. We all experience it every day, and it upsets an old technical guy like myself. Just because your grandfather ran a specific brand of oil that was great once upon a time doesn’t guarantee that it is great now. The Gulf Oil Co. hasn’t existed for many years, yet the brand name is still out there owned by two current oil marketers.

Lube specifications, lubricant formulations, additive suppliers, and the resultant products change every few years.  Marketers promote brand names hoping you will be lazy and merely trust that brand name to protect your engine forever! However, as a scientist, I want to see actual test data, not testimonials from Joe Sixpack prior to making purchases. And scantily-clad ladies don’t necessarily know much about engine lubes!

Therefore, how does one intelligently decide which assembly products to use? I’m going to ignore roller cams here, because rollers don’t have the EP requirements that flat tappet cams do. Rollers just need adequate, clean oil to allow their components to survive. Never use grease on rollers. If that roller skids across the cam lobe a few times without turning, it can flat spot and fail.

I recommend selecting an oil-soluble grease for use on cam lobes and lifters of flat tappet cams. Request that the various suppliers provide performance data. Use the grease you selected on all the components I mentioned above. Then if the engine has to set for a while, you’re covered.  I can’t recommend brand names here, because I helped invent some of the products out there.

Then I would select a heavier viscosity oil (e.g., 20w50), oil assembly lube, break in oil, or hot rod oil to put on all the bearing surfaces, rocker arms, etc. Don’t forget to put oil in the pan, so the engine isn’t accidentally started up dry. Some oil assembly lubes, break-in oils, and hot rod oils contain a vapor phase rust inhibitor that will protect stored engines longer. I prefer using these oils because they are safer for use if your engine won’t be fired up immediately. Don’t forget to oil the crankshaft seals to prevent them from tearing on start-up.

I hope this discussion helps unshroud some of the mysteries about engine assembly lubes. You don’t need to take any more chances with an engine build than you have to.

John Martin is a “motorhead” physicist who worked for Lubrizol for 25 years, and before that he worked for Shell. He has formulated and tested racing oils for NASCAR and NHRA Pro Stock engines for decades. 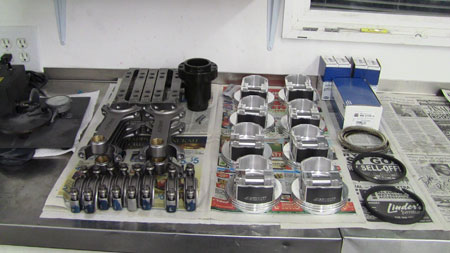