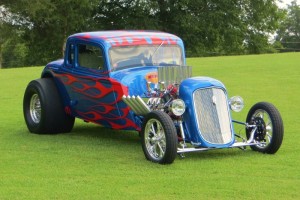 Mopar enthusiasts selected Roger Davis and his 1934 Plymouth PF 5-Window Coupe as the fourth and final winner in the online portion of the 2014 Mopar “Top Eliminator HEMI Heritage” competition.

This is the eighth year Mopar, the service, parts and customer-care brand, has held the “Top Eliminator” challenge to help shine a light on passionate and dedicated muscle car enthusiasts who exemplify unmatched skills in modifying or preserving a classic or modern-day company vehicle. This year’s edition was renamed to encompass the brand’s celebration of the 50th anniversary of the iconic 426 Race HEMI engine.

The online winning selection, a 1934 Plymouth PF 5-window Coupe named “in-Flame-ous” is owned by Roger Davis, a lieutenant colonel in the U.S. Army on active duty as a deputy brigade commander training troops in Birmingham, Alabama. He bought the hot rod in 2012 after previous incarnations had it as a yellow street rod in the ‘70s and then a drag racer from the late ‘90s to 2010 posting a best run of 9.160 seconds at 143.46 miles per hour (mph). He spent the last two years restoring and personalizing his hot rod and won “Best Mopar” honors at Detroit’s Autorama earlier this year. 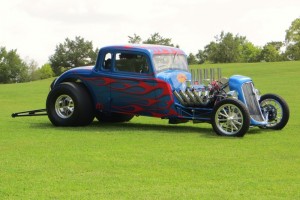 Davis made changes to the car to make it street legal, including the addition of lights, wipers and a horn, and upgraded the alternator and ignition system. The pre-war hot rod also received a new paint scheme along with seven painted historical Chrysler logos, new wheels and tires, a re-work of front suspension, steering and brakes, as well as a customized grille. Additional Mopar parts include a Siamese-bore HEMI 4-bolt block and Mopar crank.

“The 1934 Plymouth PF 5-window Coupe is the ultimate ride for hot rodders,” said Davis. “It’s like what you see in the movie American Graffiti.”

Davis uses his daily driver, a 2012 Ram 1500 Laramie, to tow his “Mopar HEMI Heritage Top Eliminator” winner in a trailer custom-painted to match his truck.