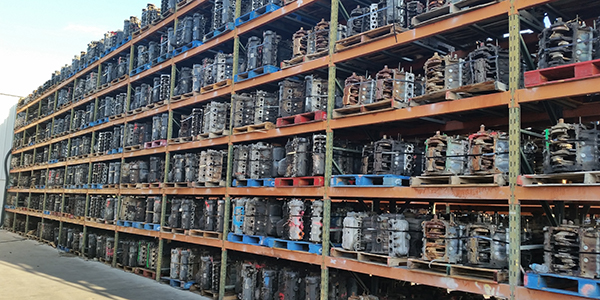 Cores are the heart and soul of the engine rebuilding business. If you don’t have a core, you don’t have an engine to rebuild. The challenge is getting the right cores that are in demand, and at a price that you and your customers can afford.

Cores are the heart and soul of the engine rebuilding business. If you don’t have a core, you don’t have an engine to rebuild. The challenge is getting the right cores that are in demand, and at a price that you and your customers can afford.

The engine rebuilding business has changed dramatically in recent years. Thanks to fuel injection, better quality lubricants and reduced maintenance requirements, engines are lasting longer than ever before. Engines that used to need rings, bearings and/or a valve job by the time they reached 100,000 miles are now going more than twice as many miles before major repairs are needed.

Consequently, by the time the vehicle needs a new engine, it has depreciated to the point where it seldom makes economic sense to spend the money on a rebuilt engine. The only exceptions are older pickup trucks and larger SUVs that have utility value, or special performance vehicles that have collector value. Most older high mileage cars today end up in the salvage yard if the engine or transmission calls it quits.

Less demand for rebuilt engines means less demand for cores. That, in turn, has led to consolidation and attrition among core suppliers. At the same time, core suppliers are finding the supply of many older engines has simply dried up. A lot of older engines that otherwise might have had a second or third life as a rebuildable core were lost when scrap iron prices soared back in 2007 and 2008, right before the economy nose dived. As one core supplier put it, “Many of these older engines have simply gone extinct. You can’t find them at any price.”

One large core supplier told us they had fifty 440 Chrysler engines in stock last year, but this year have been unable to buy a single one. It’s the same story with 454 Chevy engines and big block Fords, and even many older high volume engines such as Chevy and Ford six cylinders. These engines used to be plentiful and relatively cheap, but in recent years the supply has dried up in spite of ongoing demand and higher core value prices.

One rebuilder we interviewed said they have a department that specializes in vintage engines. The vintage restoration market has experienced solid growth, and there is good demand for older Cadillac, Buick, Oldsmobile and Pontiac engines.

A growing number of hot rodders want something other than a 350 Chevy V8 in their car. They want a “unique” engine that stands out from the crowd at cruise nights and car shows. Some guys are even pulling their Chevy V8s out of their hot rods and installing a souped up Ford flathead V8, a turbocharged diesel engine from a farm tractor, or even a marine engine. Anything goes these days, and the more unique the engine, the more attention it receives.

Core suppliers typically buy their engines from salvage yards, and pay according to the model year, mileage and demand for a particular engine. Core values for a complete engine assembly (block, heads, crank, front cover, valve covers & oil pan) may range from less than $100 to more than $600 depending on year, make, model, engine size and the supply and demand for that particular engine. Most engine cores fall in the $150 to $350 range. Pickup truck diesels usually fetch considerably more.  For example, a core supplier might pay $900 or more for a late model 6.4L Ford Powerstroke from a 2005 to 2015 F-Series truck.

A few engine cores that are currently in high demand include Ford 5.4L 3-valve truck engines, 6.0L Chevy truck engines, 2.5L GM engines for postal delivery trucks, and yes even 350 Chevy V8s (the most popular core of all time!).

For heavy-duty truck engines, finding the right cores can be even more challenging due to their smaller production numbers. One core supplier told us that a Caterpillar C15 6NZ (a pre-emissions single turbo engine) is very difficult to find. This engine was last produced in 2003.

Many core suppliers use Hollander numbers in their engine want-to-buy lists, since that’s what most auto wreckers use to inventory their parts. With scrap iron prices down to more traditional levels, it’s more profitable for many auto wreckers to sell certain engines as cores rather than to grind them up as scrap iron or aluminum. It all boils down to the cost of labor to cut out or pull an engine and ship it to a core supplier versus its core value. If there’s enough profit margin to justify saving an engine versus scrapping it, the engine will be recycled into the core market.

Using the core supplier buy lists as a value guide allows auto wreckers to better evaluate which engines are worth recycling and which ones are not. There’s no point in recycling engines that have little or no core value because there is little or no demand for them.

Core suppliers also buy direct from consumers, repair shops and even some machine shops who may have some older engines gathering dust in a back room or storage shed. If you have a rebuildable engine in storage but no plans to do anything with it, consider selling it to a core supplier rather than doing nothing with it or scrapping it. If the crank can be rotated 360 degrees without locking up, and there are no known issues with the block or heads that would make the engine unrebuildable, it may have value to a core supplier or another engine rebuilder. Check out the “wanted lists” that some major core suppliers post online to see what they are willing to pay for the engine. Or, sell it yourself on ebay, Craig’s List or by word-of-mouth advertising.

Even if a block has a rod through the side or is locked up because of a spun bearing or a dropped valve, the heads, manifolds and other parts may have core value. It all depends on the engine, the application and how much demand there is for specific parts on that engine. A set of 351 Cleveland heads are still a valuable set of heads even if the block is no good.

Core suppliers tell us that almost all late model engines are hard to get because of the proliferation of sengine configurations. Evolving engine technology means ongoing changes in engine components. Production engines that used to remain basically unchanged for four, five or six model years can now change from one year to the next, and sometimes even within a single model year. Car makers may alter the bore, stroke, compression ratio, pistons, cams, cam drives, valvetrain components, cylinder heads, valve covers, manifolds, oil pans, timing covers, sensor locations, you-name-it from one year to the next to tweak performance, fuel economy or emissions.

This limits the amount of internal and external engine parts that can be interchanged from one model year engine to the next. Many of the parts may interchange, but some may not – and those parts might be ones that prevent an engine from being installed in a particular application.

With most late model applications, the engines are so closely matched to their Powertrain Control Module, wiring harness and emissions calibration that you can only rebuild a core that is an exact match for the original. Close may not be good enough if it creates installation issues for your customer, or sets Fault Codes and turns on the Check Engine light after it has been installed.

Although there are fewer production engine remanufacturers (PERs) these days, those who are still in the business obviously need a steady supply of cores. They also understand that lean manufacturing theories like “just in time manufacturing” don’t work for cores. They can’t count on getting the cores they need on short notice. They have to buy their cores in advance and have the cores on hand so they can be remanufactured and sold when a customer calls. No rebuildable core in inventory can mean a lost sale if the core can’t be sourced in a timely manner.

Most machine shops buy cores on an “as needed” basis since most do one-off custom engine work for individual customers. If a customer’s original engine cannot be rebuilt because of extreme wear, cracks or other damage (or it is not economical to do so because of the cost of the repairs), a replacement block or heads will be needed to complete the job. This means finding a good rebuildable core or buying new original equipment or aftermarket castings.

New castings are readily available for many popular applications, but the price can be a stumbling block depending on the customer and what they are willing to spend. New “green” castings are also not as stable initially as a seasoned block or heads, which may be an important consideration in performance applications. On the other hand, many aftermarket blocks provide significant improvements over OEM stock castings in terms of thicker cylinder walls, desk surfaces, beefed up webs around the mains, taller deck heights, relocated cam and lifter cores, etc. So it all depends on what the customer wants, what they can afford and what the application demands.

If you are buying an engine from a core supplier, you can buy a long block, a short block, a bare block or even a complete engine with all the covers and manifolds.

You can also buy a core “as is” and take your chances, or you can have your supplier disassemble, clean and inspect the block, heads, crank and/or other parts to verify they can be rebuilt. Of course, you will pay extra for such services because it’s labor-intensive. Even so, it’s usually a worthwhile expense because it saves time and shipping costs if an inspected core turns out to be unusable.

When purchasing a core, your core supplier will need to know the year, make and model of the vehicle, and engine displacement (liters or cubic inches). If it is an import application, they may also need to know the engine family designation. Referring to the VIN may also help identify a particular engine.

They will also want to know if you want a bare block, short block, long block or complete engine. If the core is one they have in stock, and you are buying it “as is” (no teardown, cleaning or inspection), you can often get it next day, or within a couple of days depending on your location and shipping costs. If you want an engine disassembled, cleaned and inspected, add an extra day or two to the process.

Also, before you buy a core, make sure you fully understand your core suppliers shipping, warranty and return policies (who pays for what, and how much). If a core supplier has inspected the core and declared it good, they should stand behind their claim if a part turns out to not be usable.