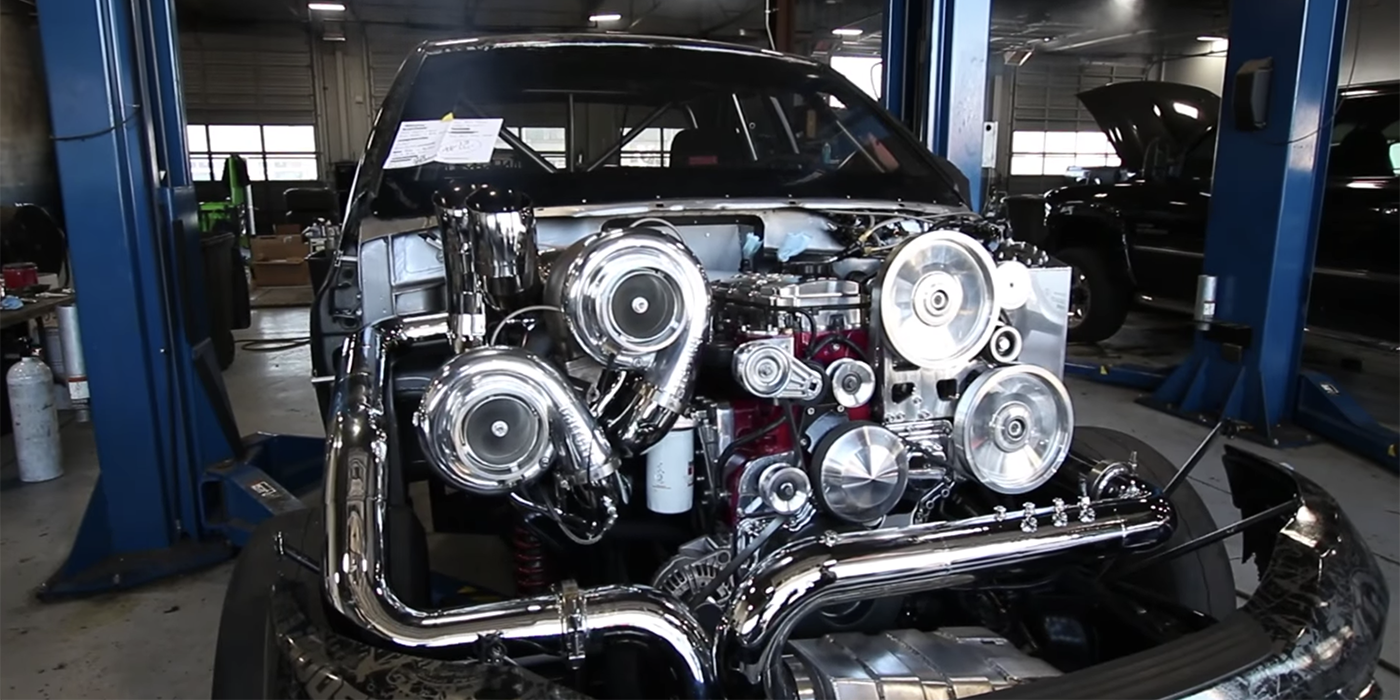 Already the chassis dyno horsepower record holder at 2,760 horsepower, Shawn Baca of Industrial Injection Diesel Performance isn’t just relaxing. His truck, named Master Shredder, is getting a new 6.7L Cummins that Shawn says has enough air for 6,000 horsepower with three 106mm turbos and enough nitrous to put it into the atmosphere! Find out how Shawn is trying to crack 3,000 horsepower to the tires!

Now that we’ve been partnered with AMSOIL on our Diesel of the Week series for nearly a year sharing the stories of several dozen diesel shops, people are taking notice. One such person is Industrial Injection Diesel Performance’s engine builder, Shawn Baca.

“You guys are teamed up with AMSOIL, correct?” Baca asked. “I follow the social media stuff that you guys do and Ben Shadday is actually the one who tunes my truck and you guys did a feature on him.”

We sure did. We featured Ben and his shop, Done Right Diesel Performance, back in August 2019, and Shawn’s enthusiasm for following what we’re doing with Diesel of the Week is mutual as we’ve been following what he’s been doing with his 2006 Dodge 2500, aptly named Master Shredder. Shawn’s Master Shredder is the current chassis dyno horsepower record holder at 2,760 horsepower!

Despite what we knew from Shawn’s podium performances at the Ultimate Callout Challenge (UCC) competitions, we wanted to know more about his role at Industrial Injection Diesel Performance in Salt Lake City, UT and find out what he’s been doing to Master Shredder to up the ante for 2020.

Shawn has been the engine room mainstay at Industrial Injection as the head engine builder for 10 years now. His career at Industrial started by using the company’s services and products when he was rebuilding a 1992 Dodge Cummins.

“I’ve been wrenching pretty much my whole life,” Baca says. “I’ve always been fascinated with making horsepower. I grew up building small block and big block Chevy engines and then got turned onto diesels when all my friends started getting them.

“Industrial Injection obviously sells a bunch of performance stuff and everything for diesels and that’s how I got linked up with them. I had pulled the engine out of my 1992 first gen Dodge Cummins and brought it here to get all the machine work done and buy parts through these guys.

As my engine was being built, they actually offered me a job as a tech.”

As head engine builder today, Baca says he puts together roughly one short block per day to keep up with demand, and Industrial Injection builds 150 to 200 complete engines a year. The Duramax and Cummins platforms reign supreme, but Powerstrokes get thrown in the mix as well.

“We’re known as a Cummins shop just because of what I’ve done, but we will work on Duramax and Powerstrokes,” Baca says. “As far as Industrial Injection goes, we have a performance shop in Salt Lake City where we do turbocharger rebuilds. We’re actually BorgWarner’s biggest distributor on the West Coast. This shop is our manufacturing shop and then we have a machine shop down in Richfield, Utah where we do all of our machined parts for fuel pumps, injectors as well as fully machined engines. It’s a whole manufacturing operation we’ve got.

“Brady Williams started Industrial Injection in 1985 and sadly passed away a few years ago. However, his wife, Jerolyn and their three boys, Brett, Shane and Cody, all run the business as a family today.”

Shawn has a been a big part of that as well with his sights always set on more horsepower. That affinity for diesel led him to the dyno circuit and drag race events and it’s been non-stop ever since.

“A couple years after I started working here, I picked up a new truck I call Master Shredder,” he says. “I chased the dyno circuit pretty heavily with that truck just shooting for power and that turned into a big deal with the Ultimate Callout Challenge and it has evolved from there.”

But before Baca’s aspirations got as big as they are today, Industrial Injection was actually leading the charge when it came to high-horsepower Duramax engines.

That feat was accomplished only five or six years ago, which goes to show how much evolution has occurred in diesel performance in such a short time.

“Industrial cracked it and then I cracked it and then everyone else started chasing it,” Baca says. “It took them quite a few years to catch up, but I’ve been able to maintain that record. As far as the Northwest Dyno Circuit goes, which is the same dyno they use in all the diesel events, I’ve pretty much held the horsepower record the whole time.”

Despite his dyno dominance, Shawn was still being beat out by a couple guys at UCC, leaving him with two prior third-place finishes and a second-place finish this past year. With plenty more still to prove, Baca has been busy with the next evolution of Master Shredder.

“The truck (2006 Dodge 2500) started as a daily driver and once I started chasing the dyno circuit it morphed into a race truck,” he says. “It came with a 5.9L Cummins, but now it is a solid block 6.7L Cummins. It’s an aftermarket block made by Hamilton Cams out of Texas. The engine is loaded. It’s got Diamond pistons in it. It’s got a Hamilton roller camshaft, Manton roller rockers. We did all the machine work in-house. It’s got Carrillo rods, a factory crankshaft and all ARP hardware.

“It has a Stage 4 race head that is a factory head that we’ve modified highly. We went to oversized Victory valves, Hamilton dual springs and competition cut valve seats. The head has been CNC ported and hand blended. The intake runner has been cut off and it has a sheet metal intake that was built for it by ZZ Fab.

“As far as injectors, it’s got Industrial Injection’s King Cobra injectors. The truck right now runs three CP3 pumps with two driven off the belt. However, I’m working on one now that has the exact same rotating assembly as the other, but I went to a Peterson dry sump oiling system and a gear driven timing cover, so that incorporates all the CP3s to be driven off of gears instead of a belt. That engine set up has three Garrett GTX Gen 2 106mm turbochargers on it. It also has four kits of nitrous from Nitrous Express. I went to Bean Machine for the pan and the front cover for the new engine.”

To the tire, the prior 6.7L Cummins did 2,760 horsepower on a chassis dyno. With the new 6.7L Cummins engine, Baca is trying to shoot for the 3,000-horsepower mark to the tire, which he admits is an extremely hard feat.

“Trying to get tires to hook up at that power level in that short of a sweep on rpm is a battle,” he says. “I was hanging around the 2,500-horse range for a long time up until last summer. That’s when we cranked it up to 2,700 horse with more nitrous and more tuning. I told Ben to throw the kitchen sink at it. We’re still working on the truck. That’s why we went to four CP3 pumps and stuff like that because we are testing bigger injectors. What I’m running into is I’m having a hard time keeping fuel to them. The thing has a big 12-gallon-per-minute Aeromotive gear pump/lift pump that supplies the fuel to the four CP3s.

“That’s what we’ve been up against is not having enough fuel pressure for the injectors, so we’re not making what we should. On paper, we’ve got enough air on there for 6,000 horse with three 106mm turbos and enough nitrous to put that thing into the atmosphere.”

While horsepower levels don’t seem to be a problem, the truck’s weight has been an issue in drag race events, and Shawn is working to rectify that.

“For the UCC event we have to do the dyno, drags and sled pulls. It’s done fairly well at all three and I’ve taken the podium a couple of times. Lavon Miller and Derek Rose always seem to get one on me. It’s always been the drag race portion holding us back.”

“New horsepower goals are never going to stop as long as we have the dyno,” Baca says. For that reason, the 2020 UCC should prove to be an exciting competition!

Stage 2 6.4L Powerstroke
Connect with us