MLS Gasket Update 2017: Is there anything the MLS gasket can’t do? - Engine Builder Magazine 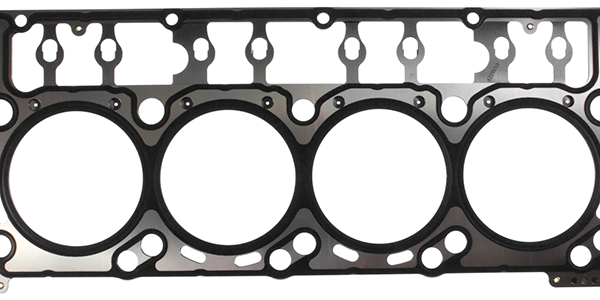 Sometimes, the less you know the better. I’ve spent the last 50 or so years punishing all types of engines with insane compression ratios, huge doses of nitrous oxide, and virtually every type of supercharger I could get my hands on. In all that time I had no idea that the cylinder heads were lifting and bouncing up and down on the block. If I had known or even thought about that, it would have scared me to death. Sure, we had a couple of failures like blocks torched an inch deep between cylinders and a few melted pistons here and there, but the old fire-ring composition head gaskets never seemed to be the problem. In doing a little research for this MLS (Multi-Layer-Steel) gasket story, I learned that the primary reason that MLS gaskets were designed was to contain the compression pressures on “modern” engines that are more prone to head lifting issues.

The days of getting away with composition gaskets in extreme combustion situations were back when the deck surfaces on blocks and heads were thick and strong, and the heads were clamped with 5-6 head bolts per cylinder. However, all that changed when carmakers became extremely weight conscious for MPG reasons and they started removing material out of blocks and heads.

MALHE Aftermarket’s Bill McKnight provided us with a little history on where MLS gaskets came from and how they have evolved: Japanese gasket maker, Ishikawa got the first patent for the MLS gasket in 1970, and the first production vehicle to use an MLS gasket was an Isuzu. This technology didn’t burst onto the domestic scene until 1991 when Ford used an Ishikawa-sourced gasket on its new 4.6L Modular V8.

Since then, the MLS gasket has become the gasket of choice for OE service and the performance aftermarket as well. It brings with it several advantages for both camps – they are easy to install because they go on completely dry, they require no re-torque after running, require less torque thereby decreasing bore distortion, are extremely heat resistant, and they work well with modern OE torque-to-yield (TTY) fasteners.

So how does it work? As the name implies, several layers of embossed stainless steel along with flat layers of steel are sandwiched together to literally form a “flat spring” that can expand to fill the gap between the head and the block when the head lifts ever so slightly (maybe .001˝-.002˝) during a combustion event. It is coated with a very thin layer of polymer – often it’s a .001˝ coating of Viton rubber to seal the liquids. The amazing part of this design is that it retains its “memory” after literally millions of combustion cycles over the life of the engine.

Most MLS head gaskets are three to five layers depending upon the application. The layers are typically held together with rivets. The differences between MLS gaskets offered by various manufacturers are the grade of stainless steel (usually in the 300 series) and the heat treat of the stainless steel layers after embossing. Fel-Pro’s Ron Rotunno stated, “The size and shape of the emboss bead is critical to how the spring works – perfection in tooling and manufacturing is everything.” Embossments are not only found around the combustion chamber but also around the water and oil passages as well.

Another feature found in many performance MLS head gaskets and one that is crucial for nitrous and boosted engines is the “stopper layer.” The stopper layer accomplishes a couple of important tasks: it provides a very positive seal against combustion pressures, much like a fire ring does in a composition-type gasket. It also keeps the embossed layers from being over-compressed and unable to spring back. Again, each gasket manufacturer has its own take on how to accomplish the stopper layer. Fel-Pro laser welds the stopper layer to the shim (flat) layer that is sandwiched between the embossed layers. Cometic folds over the edge on the center embossed layer on its MLX line of head gaskets.

Not all MLS gaskets feature a stopper layer, and in fact many companies are building two distinct versions of their MLS head gaskets. MAHLE Aftermarket for example, will have two separate gasket brands to be introduced at this year’s PRI show – MAHLE Original for OE replacement gaskets and MAHLE Performance for performance gaskets and components. Cometic is bridging the non-stopper/stopper divide with its MLS and MLX models. Fel-Pro is migrating its patented LaserWeld stopper layer technology to virtually all of its MLS applications, OE and performance.

Expect to find fewer applications in many performance MLS gasket lines due to tooling costs and sales volume. However, Cometic’s Kevyn Kistner points out that Cometic is focused on the performance aftermarket and they offer virtually unlimited bore sizes and gasket thicknesses to serve the engine builder’s needs. But don’t get totally hung up on the “performance” versions of MLS gaskets because a simple OE MLS gasket will be fine for most engines, even those running 25psi of boost or a 250hp shot of nitrous, so long as it fits your bore size and thickness requirements. The performance versions of MLS typically have higher temperature coatings, a stopper layer, and additional active layers to maintain sealing stress during periods of extreme head lift, but may require a smoother deck surface finish of 30-50 Ra or better due to the thinner coatings on the outside layers.

One of the big changes affecting the performance aftermarket concerning MLS head gaskets are head block deck surface finish requirements. While the early OE MLS gaskets required a surface finish of 30 Ra or smoother (roughness average – the distance from peak to valley of the machined surface), most gasket makers now can accommodate 40-60 Ra and Fel-Pro’s PermaTorque MLS Blue coating will seal an 80 Ra surface and a 60 Ra surface for the Black performance coating. (Typical out-of-the-box head and block surfaces are approximately 60 Ra when new.) However, surface finish is just one of the many requirements of MLS gaskets.

As engine builders, there is no excuse for deck surfaces that are not 100% flat, but the limits for warped or uneven decks is .001˝ per cylinder lengthwise (.004˝ on an inline four or V8 head or deck) and .002˝ across the width of the head. Best practice: perfectly flat decks and as smooth a finish as you can put on the surfaces. Not necessary, just the right way to do it. Also, any existing O-ring grooves must be removed by surfacing or replacing the parts with a non-O-ringed block or heads.

Always install the gaskets dry unless the manufacturer of your gaskets recommends otherwise. The coating put on the outside layers was not intended to interact with additional sealants. Next, if you are using Torque-to-Yield bolts never reuse the original bolts, because they have already been torqued to yield and actually pulled a bit into the yield zone by both head liftoff and thermal expansion of the engine components. Otherwise, use quality fasteners and chase the threads in the block and oil the threads to get true torque readings. Be sure to use a calibrated or certified torque wrench too. Virtually every gasket maker we spoke with strongly recommended against re-using any MLS gasket. The surface sealer could get damaged and the “spring-back” in the gasket may be compromised from engine heat episodes like hot spots in the heads. However, head gaskets used for engine mockup can be reused, no problem.

When we interviewed the major MLS gasket makers represented here we asked if there was any other style of gasket that they sell that they would recommend over MLS for performance engines. Every company said that the MLS head gasket was a superior design to everything else they offered. Victor Reinz’s Arnie Fox put it this way, “MLS is generally the most robust head gasket type. Graphite or composition gaskets can be appropriate for older engine designs. There are no real concerns regarding the ability of our MLS gaskets to seal very high combustion pressures – even in excess of 3,000psi. The concern is more with the structural integrity of the head and block. If, for example, there is extreme head lift-off during combustion, this can have a detrimental effect to the overall robustness of the head gasket joint.”

To seal the modern engine, the proper gasket is always one of the most critical product selections you must make. Sometimes, it won’t be an MLS gasket but if it is, be sure to follow manufacturer recommendations for surface finish and installation procedures.

VP Racing Fuels is best known as the World Leader in Race Fuel Technology™, fueling champions in virtually every form of motorsport on land, sea and air since 1975.  VP is the Official Racing Fuel of the WeatherTech SportsCar Championship, AMA Supercross, World of Outlaws Sprint Cars, PDRA and Rally America, among more than 60 VP-sponsored series and sanctioning bodies.

As part of a retail branding program, gas stations and convenience stores across the U.S. are being branded as VP Racing Fuels, with each providing distribution for VP’s other product lines, including ethanol-free VP Small Engine Fuels, formulated for 2- and 4-cycle outdoor power equipment; VP Madditive performance chemicals for gas and diesel engines; VP PowerWash™ and more.

VP’s most recent diversification efforts include the introduction of VP Hi-Performance Lubricants in conjunction with the launch of quick lube facilities branded “VP Racing FASTLUBE.”  More information is available online at VPRacingFuels.com.

For additional information on the products referenced in this article or contact information for these  and other gasket manufacturers and suppliers, visit our interactive online Buyers Guide at www.enginebuildermag.com.