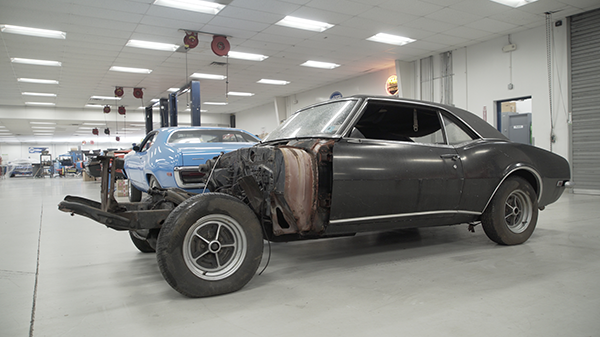 Petty’s Garage Breathes New Life Back Into a Classic Camaro

Typically, a 50th birthday party is an occasion to remind the celebrant that his better days are behind him, he’ll never catch up to the younger crowd, that he is, in fact, now over the hill.

Luckily for one 50 year old, the attention is all on being better than ever. 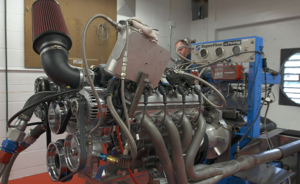 A GM LS7 crate engine made a nice starting point for the engine builders at Petty’s Garage.

After being rescued from a field in Martinsville, VA, a beaten, battered, 1968 Camaro RS has been given the full restoration treatment by the team at Petty’s Garage in Level Cross, NC. The car has been resurrected with a custom-built LS7 engine and will soon be presented to a lucky winner in the 2018 Drive With the Original promotion sponsored by MAHLE Aftermarket.

“We weren’t looking to do a full-blown pro touring makeover or anything like that, but tried to restore the car pretty true to form,” explains Will Cheek, aftermarket and restoration sales manager for Petty’s Garage. “We took the approach that, if we were building an original 1968 Camaro, but in today’s time with today’s components, how would we build it? 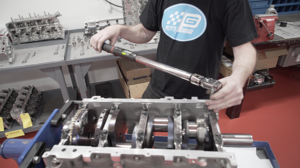 Since the stroke remained the same, the factory crank was suitable for the Camaro’s needs. The crank was balanced to within 2 grams on a 1488 gram bobweight.

“We looked at buying a block and starting from scratch, but we determined it was more efficient to buy a crate LS7 from GM and rebuild it into something we really wanted,” says Cheek.

The goal, he says, wasn’t a radical reinterpretation – it was attention to and affection for the clean lines of the classic. “We wanted to do an old-school-style motor, with a big old 427, adding air conditioning, making it handle a little bit better, upgrading to disc brakes. So, it’s an old car build, but done here in modern times.”

According to the VIN, the car was a ’68 Camaro RS – however someone had, at some point in its life, added some SS badging to the body. That was a curious fact, but since the car was found with no drivetrain or front clip, it didn’t really matter. “We did a full-blown, frame-off restoration,” Cheek says, “from floor pans to trimming off drip rails, to tucking bumpers up tight. We went all the way back through the body, all the way down to bare metal, before being repainted in custom MAHLE blue paint.” 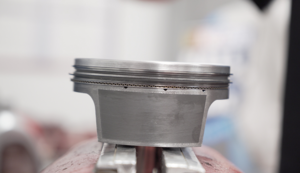 Richard Petty is, of course, known as the King of Stock Car Racing, and since his retirement from NASCAR in 1992, has remained active in support of his passion for great cars. He has been building hot rods ever since his childhood bicycle wouldn’t go fast enough and Petty’s Garage is the high performance speed shop he founded in 2008 as an expansion of his competitive career and ambition to find ways to continue to win on and off the track.

Chevy’s original Rally Sport cost $2,775 in 1968 and was described then as “a more glamorous version” of the Camaro. With hideaway headlamps, revised tail and backup lights and special badging and trim, the car had either a 327, 350 or 396 cid engine.

We spoke with Fred Lankford, head engine builder at Petty’s Garage about the LS7 engine the Petty team built to replace that missing original smallblock.

“Once we tore the crate engine down to the block, we started over just as we would with any rebuild,” Lankford says. “We decked the block to 9.240˝, cutting .003˝ off the deck – basically we just got it square to give us a solid foundation. We honed the cylinders to 4.130˝ with a Sunnen SV15 diamond hone head. We started with 320 grit diamond to size then followed that with 500 grit for four strokes and finished with a brush for three strokes.” Using torque plates, Lankford says final tolerances were +.0002˝/-.0000˝ with  finish of 15 RPK/40 RVK.

The Petty team added ARP studs into the block to hold the heads in place in anticipation of greater power.

The MAHLE pistons were shelf-stock Power Pak forged pistons with slipper skirts that are “off the shelf “ to a degree, Lankford admits. “Naturally, we have to do a little something to them as far as deburring the top with some paper, knocking off the sharp edges a little bit. I guess that’s still the NASCAR stuff in me.”

Lankford added a new MAHLE ring pack with 1 mm steel top rings (HV385 gapped .023˝), 1 mm second (steel napier gapped .023˝) and 2 mm CP20 standard tensioner oil rings (.014˝/.016˝ rail, .010˝ expander gap). He says his standard method of clocking the rings is to install the top ring at the intake pocket, the second ring at the exhaust side and then back to the intake side for the oil ring. 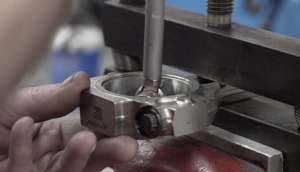 The team reused the GM/Pankl titanium rods from the crate, but ensured they had .012˝ side clearance and .0018˝ bearing clearance.

“I go 180 degrees different each time,” Lankford explains. “In theory, of course, the rings all rotate – maybe as much as seven rotations per 1,000 rpm – and they end up lining up. It does the ‘path of least resistance’ thing once it all lines up and it tends to stay that way – but it really has no adverse effect on how things run in the end, in my opinion.”

The LS7 block was lightly line honed to .0020˝ clearance for new Clevite main bearings with .0045˝ end play. The team reused the GM/Pankl titanium rods from the crate, but ensured they had .012˝ side clearance and .0018˝ bearing clearance. “We did install new rod bolts because, the way they’re designed, it’s very difficult to check the stretch on the rods. To be safe we used new bolts from GM,” says Lankford. 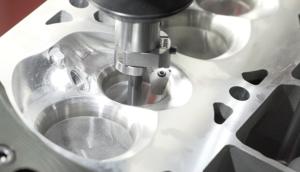 The seats required only slight attention to ensure that the “factory standards” met Petty’s.

Since the stroke remained the same, the factory crank was suitable for the Camaro’s needs, so Lankford and his team simply balanced it to 1488 gram bobweight. “I always figure a 1-percent overbalance is best,” Lankford says. “That’s balanced to within 2 grams, front and rear being identical, with an ATI harmonic damper installed.”

The LS7 engine came with a dry sump oiling system that, according to some aftermarket experts is unnecessarily complicated. In order to play up the old-school aspect of this engine, and, frankly, simplify the engine’s operation, Lankford explains that the build called for a dry sump to wet sump oil system conversion. “In doing this, we installed a Scoggins & Dickey kit, which involved changing out the timing gear, the oil pump, oil pickup and oil seal spacer. We drilled the block and modified the windage tray to accept the dipstick.” 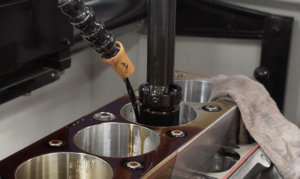 Cylinders were honed using torque plates to 4.130˝, starting with 320 grit diamond to size then followed by 500 grit for four strokes and finished with a brush for three strokes. Final tolerances were +0002˝/-.0000˝ with finish of 15 RPK/40 RVK.

The head used PAC 97-TVS-2187P valve springs (polished from the manufacturer) with 140 lbs. seat pressure at 1.850˝ installed height.  Valve seals and retainers from PAC and spring seats from Precision Engine Parts along with GM bead locks were installed as well.

The LS7 uses MAHLE Original gaskets to seal all of the mating surfaces and the naturally aspirated engine uses the Holley Terminator EFI system, Cheek explains.

“The car is built to be driven,” he says, “and that goes through the entire vehicle.  It has a much more modern drivetrain, with a Tremec five-speed. We’ve worked with the guys at Silver Sport transmissions for the transmission and driveshaft to mate with our custom 9-inch Ford rear end.  We’ve upgraded to disc brakes all around, with drilled and slotted rotors; added a Ride Tech suspension with updated control arms and other components to really improve the driveability and added a Vintage Air air conditioning system.”

The car will be awarded to a lucky winner in a special ceremony at the MAHLE booth during this year’s AAPEX show in Las Vegas.  For information on entering the contest, visit www.drivewiththeoriginal.com.

“This car is definitely  not a trailer queen” says Cheek. “–  at least that’s not our wish. We want the winner to be able to take it out and really enjoy it. It’s built to cruise.”