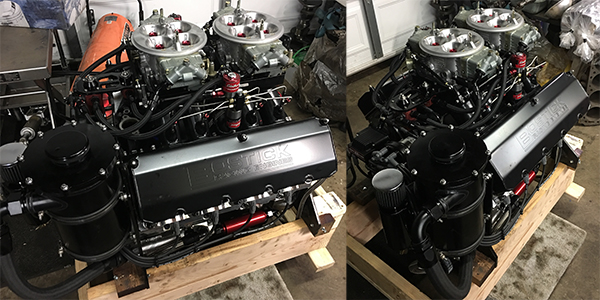 Wanting to do things his own way, James Bostick decided to open his own engine machine shop in 2008. To do so he cashed out his retirement, bought some machines and founded Bostick Racing Engines in El Cajon, CA. Fast forward 10 years, Bostick Racing Engines continues to do things their own way and builds top-notch motors like this 605 drag boat engine. Find out what makes this marine engine special.

When James Bostick decided to open his own engine machine shop, he cashed out his retirement, bought some machines and founded Bostick Racing Engines in El Cajon, CA in 2008. Fast forward 10 years, and James now has a second full-time employee, and in August, he finished moving his shop into a new 1,900 sq.-ft. facility, a big upgrade from the previous 800 sq.-ft. location. 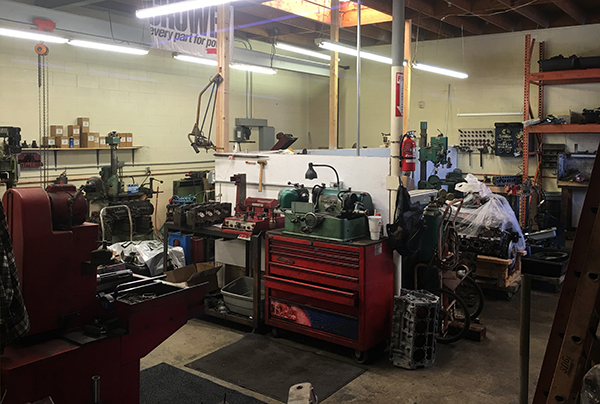 Bostick’s decision to go out on his own came from his passion for the craft that is engine building, as well as a desire to do the job the way he wanted it done.

“I was a night foreman at a CNC machine shop and I was getting guys who were wanting to have engines built for jet boats and for sand cars and stuff,” Bostick says. “I was building these engines on the side and I was trying different machine shops and I just couldn’t get anybody to do the work the way I wanted things done. I like my stuff the way I like doing my stuff. Finally, I just thought I need to do this on my own.” 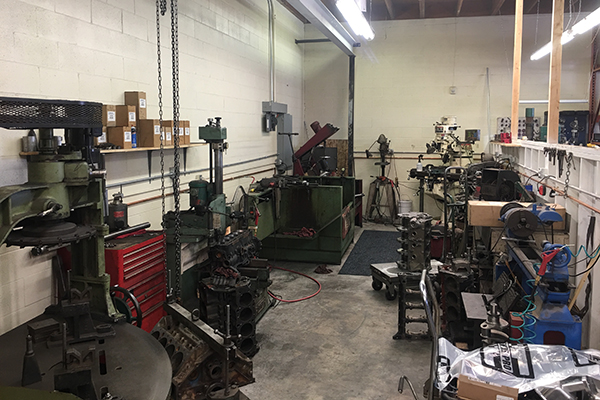 Bostick Racing Engines has added more machines over the years to the point where everything is done in-house on a Bostick engine. In fact, even other shops in the area use Bostick’s machining services.

“We’ve been growing and growing, and specializing in a lot of machine work for other shops and other builders because we decided we wanted to not just be a shop that had barely enough equipment to get by, but we wanted to really specialize in doing high performance and more high-end work,” he says. “We do a lot of marine engines, which is our niche, and it’s been working for us.” 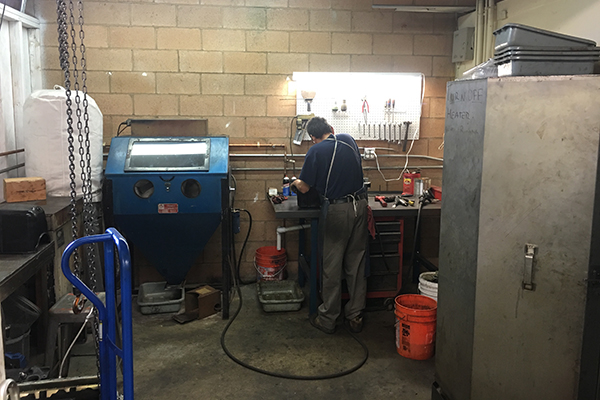 With a focus on marine, Bostick does engine work for jet boats, river hot rods and drag boats, among others, but that doesn’t mean he won’t take on other applications. The shop will do automotive engines and even some restoration jobs too.

“Typically our three biggest platforms that we do are big block Chevy, big block Ford and Chevy LS,” Bostick says. “Oldsmobiles used to be big, but they are starting to die off in the jet boat world. The big block Ford, Chevy and LS are the three big platforms in the hot rod boats these days.” 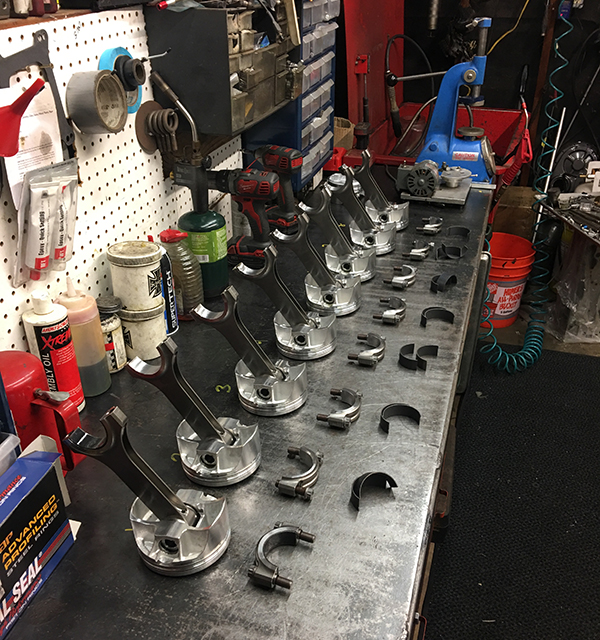 Speaking of those kinds of boats, Bostick recently finished up a 605 drag boat engine for a repeat customer looking to move up a class. His customers had Bostick build engines in the past, most recently about four seasons ago with a 468 single carb engine. As they moved up classes, Bostick added more nitrous, but that only got them so far. 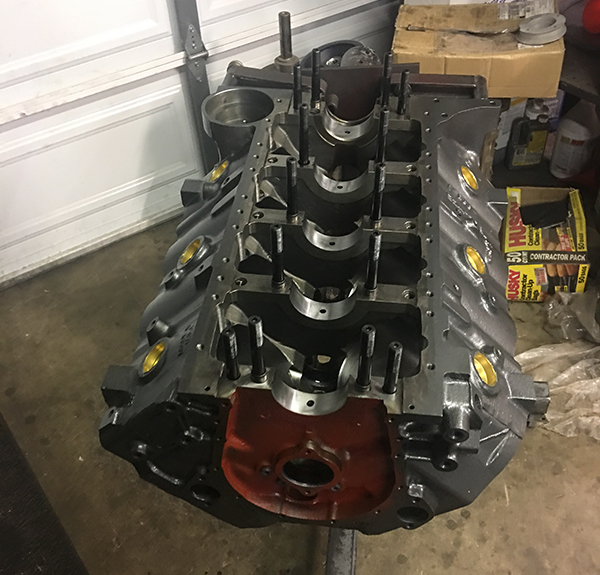 “These customers had always wanted to run the ADBA Lucas Oil Drag Boat Racing series QE class, which requires making 1,300-1,400 horsepower to do,” Bostick says. They just finished a season and getting used to a new purpose-built drag boat using the old engine, which they’ve now run three or four years. While they were racing that engine for one last year, we started gathering up parts and came up with a plan for a big inch engine – nothing real strung out, something user friendly, low on maintenance and easy on parts. We went with a larger inch engine and then started putting it together.” 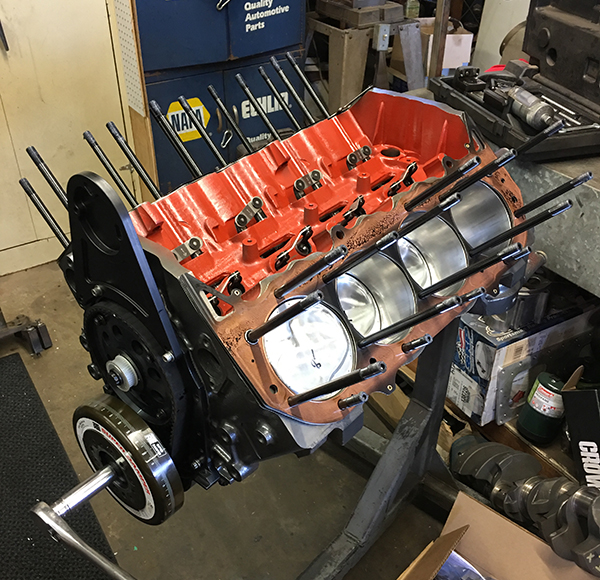 The 605 drag boat engine was built around Edelbrock 14-degree cylinder heads, which made getting all the other parts a bit more of a process.

“We started off with Edelbrock 14-degree heads that we hand blend ported,” he says. “We ended up having to have a lot of parts made because it was one of the first times that a few of these companies had dealt with these heads. We picked those heads because they were very nitrous friendly and something that was not going to be real finicky on the tuning.” 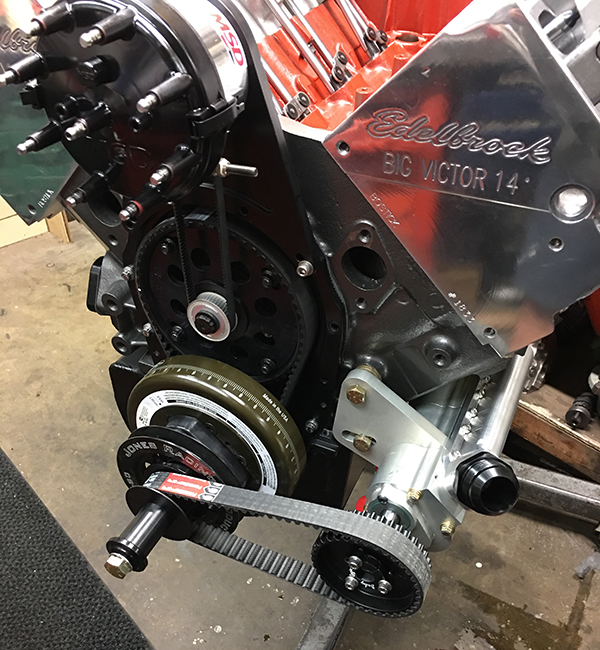 The block for the 605 came from World Products, which Bostick Racing Engines machined in order to get the proper clearances they wanted. From there, the shop finished the valve job and sent the heads to CP so they could make models to spec the right pistons for the engine. 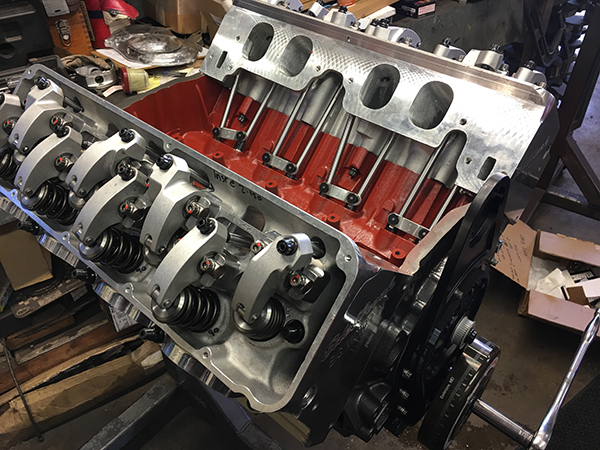 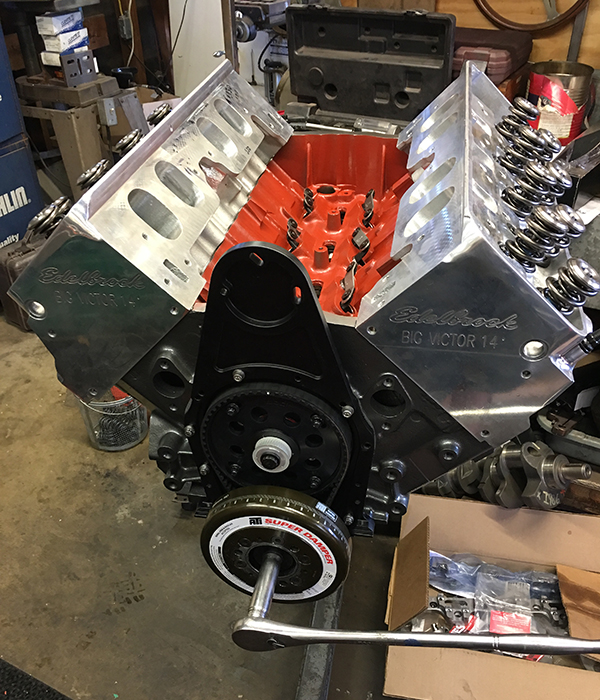 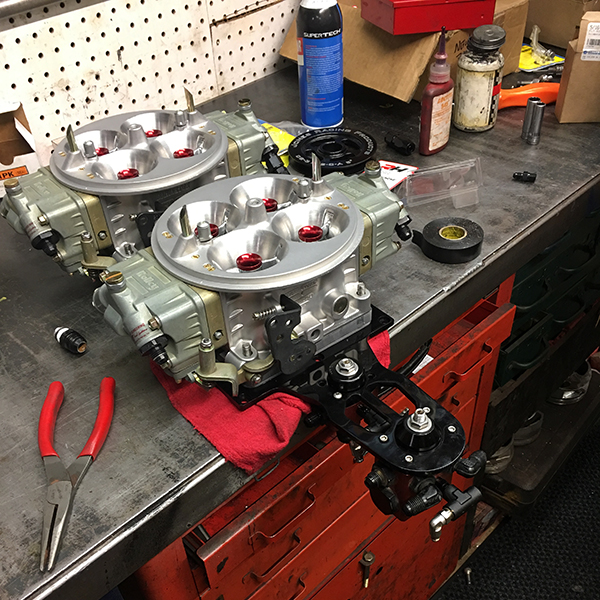 “The other issue we ran into was trying to get everything – the rods and crank – to fit in the crank case without hitting places. Other than that it was pretty straightforward. Nothing was overly complicated, but those were little things that made it to where it wasn’t a matter of ordering up parts out of your Summit catalog and then just throwing a pile of parts together.” 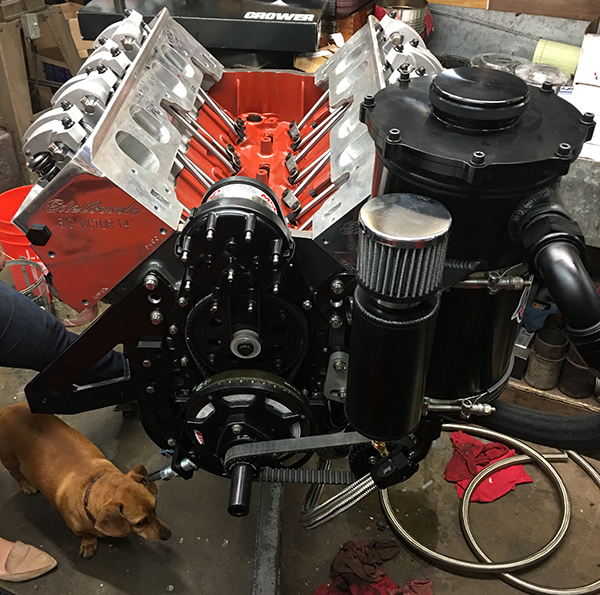 The 605 drag boat engine build was anything but throwing parts together. Once Bostick had the engine assembled and ready to run, he took the engine to Westech for dyno work.

“I use Westech for dyno work, one because we don’t have the space for a dyno room, but two because you have a third party, unbiased person evaluating your work, so there’s no way of cheating things,” Bostick says. “It does what it does and that’s it. Also, they’re a fairly world class, well recognized, well respected, very knowledgeable group of guys up there that if you’re going to be evaluated by anybody they would be the best to be evaluated by.” 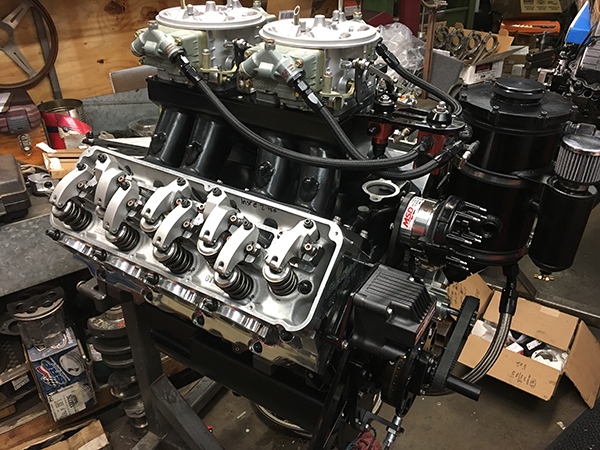 “We didn’t want it to have to turn 8,000 rpm, so we targeted a lower 7,000 rpm range so it’d be a lot easier on parts,” Bostick says. “ The nitrous tune up was basically the smallest we could put in the fogger, so it really likes the nitrous. That’s the way we cammed it and geared it towards. This engine will run good on motor, but we really wanted it to shine on nitrous.” 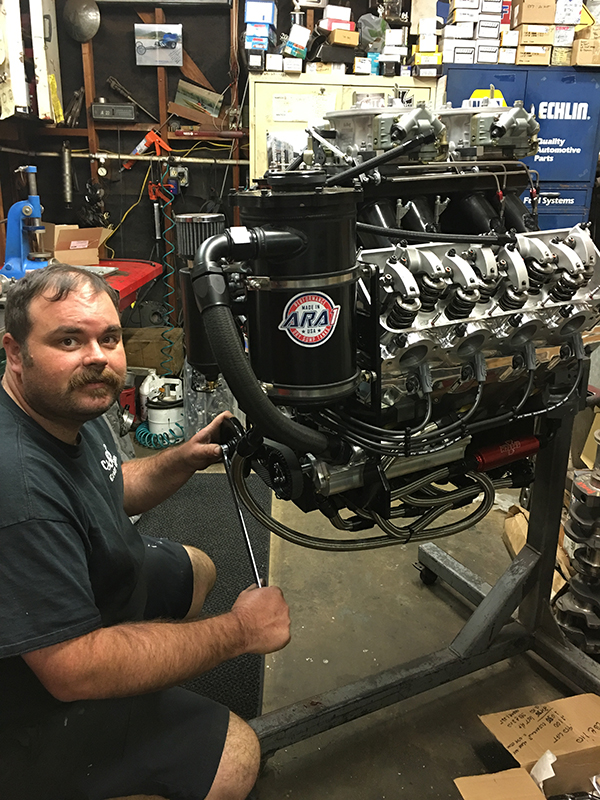 The engine liked the nitrous indeed! On just a 250 shot of nitrous the engine picked up almost 300 horsepower. With a larger tune this engine could get up to about 1,600 horsepower, according to Bostick.

Bostick’s customers are going to have some serious fun once they hit the water, and hopefully a few wins as well. 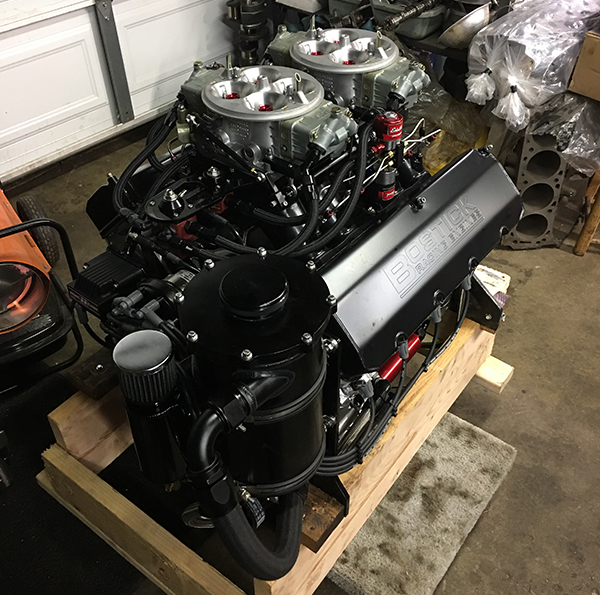